Foxtel V Netflix.... The Battle Begins! Mar 09 2015 Having Spent some time in America over the past few months, I have been watching how the Pay TV companies or "Cable" as its called, and the video streaming service, Netflix work and sit in the Market. 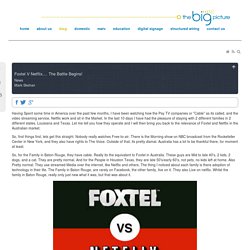 In the last 10 days I have had the pleasure of staying with 2 different families in 2 different states. Louisiana and Texas. Let me tell you how they operate and I will then bring you back to the relevance of Foxtel and Netflix in the Australian market. So, first things first, lets get this straight. So, for the Family in Baton Rouge, they have cable. This was a real eye opener for me, as I am a big lover of technology and streamed media, including Netflix. Netflix wont have the content that they have in America due to licence agreements already in place.

Let me elaborate a little more on this. Then, depending on what NBN plan gets rolled out where, a lot of people may just not have the bandwidth to cope with Netflix. But that's just my opinion, I would love to hear yours. What you need to do watch Netflix. Apr 01 2015 So if you haven't heard, last week US Video Streaming Giant "Netflix" launched in Australia and I have had numerous people ask about receiving it on a TV. 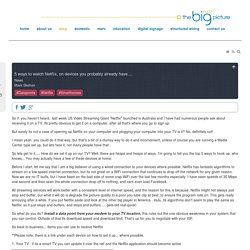 Its pretty obvious to get it on a computer, after all that's where you go to sign up. But surely its not a case of opening up Netflix on your computer and plugging your computer into your TV is it? No, definitely not! I mean yeah, you could do it that way, but that's a bit of a clumsy way to do it and inconvenient, unless of course you are running a Media Center type set up, but lets face it, not many people have that. So lets get to it..... Before I start, let me say that I am a big believer of using a wired connection to your devices where possible, Netflix has fantastic algorithms to stream on a low speed internet connection, but its not great on a WiFi connection that continues to drop off the network for any given reason. So what do you do? So back to business... items you can use to receive Netflix 1. 2. 3. 4. 5. The Real Stats behind Netflix!

Mar 22 2015 So in my last blog I talked about how The US video streaming giant, Netflix is coming to Australia, and its launch is only days away. 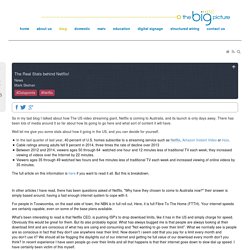 There has been lots of media around it so far about how its going to go here and what sort of content it will have. Well let me give you some stats about how it going in the US, and you can decide for yourself. In the last quarter of last year, 40 percent of U.S. homes subscribe to a streaming service such as Netflix, Amazon Instant Video or Hulu. Cable ratings among adults fell 9 percent in 2014, three times the rate of decline over 2013 Between 2012 and 2014, viewers ages 50 through 64 watched one hour and 12 minutes less of traditional TV each week; they increased viewing of videos over the Internet by 22 minutes.

Need of AV systems at corporate markets. The Big Picture-TV Antenna Installation Add to My list Added to your list About UsWe are an Audio Visual company that focus’s on consultation, supply and delivery of Audio Visual systems to the Kindergarten to 12 education sector, and the small business an corporate sectors. 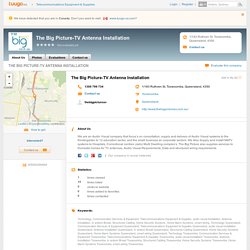 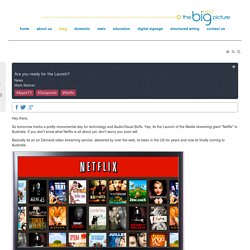 Yep, its the Launch of the Media streaming giant "Netflix" in Australia. If you don't know what Netflix is all about yet, don't worry you soon will. Basically its an on Demand video streaming service, delivered by over the web, its been in the US for years and now its finally coming to Australia. Today, Netflix announced their pricing.... firstly to note... its free for a month! Netflix monthly pricing options include: Single-stream standard definition plan for AU $8.99 Two-stream high-definition plan for AU $11.99 Four-stream 4K ultra-high definition "family" plan for AU $14.99. How to use multiple TV set using single antenna. Browse by Popular Categories The Big Picture OPEN TODAY: 8:30 am - 4:30 pm Exceptional TV Antenna & AV Systems & Installation The Big Picture is a family owned and operated business in SE Queensland. 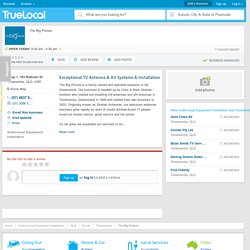 Our business is headed up by Chris & Mark Skehan - brothers who started out installing vhf antennas and uhf antennas in Toowoomba, Queensland in 1999 and started their own business in 2003. Read more Be the first to add a review. Enjoy multiple TV's using one antenna. Why Telcos are finding hard to implement 4G.