SALT LAKE CITY DIVORCE ATTORNEY CHRISTOPHER M. AULT My name is Christopher M. Ault and I am a Salt Lake City divorce attorney. As a single father of three who has gone through the divorce process, I understand many of the obstacles my clients face. That is why I am committed to help protect and look after the best interests of each of my clients in every facet of Utah family law.

The Ault Firm A Professional Corporation. No doubt fathers are very important in the lives of their children. 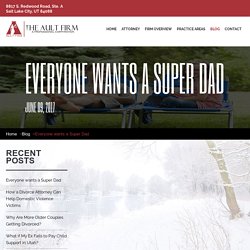 They have been the primary authority in the home for centuries and the most influential figure in all family-related matters. After women joined the workforce, the roles began to change but fathers can still influence their children quite a lot. Whether at home, school, or anywhere else your children may be, make sure they know you love them and feel proud of them. If you are seeking to establish paternity in Salt Lake City, contact Salt Lake City paternity attorney Christopher M.

Ault. When dads are involved Fathers start influencing their children since the day they are born and some say even before birth. Everyday activities. How a Divorce Attorney Can Help Domestic Violence Victims? We all dream of a society where people treat each other with utmost respect, with an absolute intolerance for emotional and/or physical violence, no matter the form it may take. 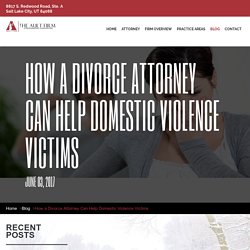 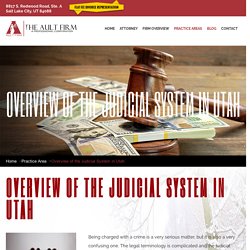 The legal terminology is complicated and the judicial system is a maze of different levels of crimes, judges, and punishments. If you have been charged with a crime, you can choose to represent yourself, but if you really want to be free of the charges that have been leveled against you, you will need an aggressive Utah lawyer who knows the laws and the terminology to fight for you successfully.

Why Are More Older Couples Getting Divorced? There was a time when couples got married with dreams of living happily ever after. 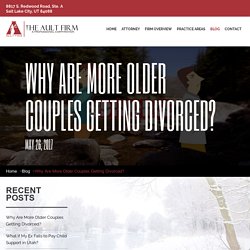 Although those dreams still exist, times have changed. There is a noticeable trend among couples in Utah and throughout the nation. Salt Lake City Custody Modifications Attorney - Family Law Attorneys. There are few things guaranteed in life. 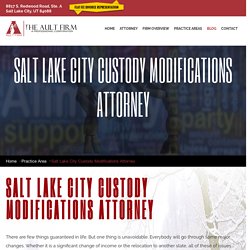 But one thing is unavoidable. Everybody will go through some major changes. Whether it is a significant change of income or the relocation to another state, all of these of issues affect child custody in Utah. My name Christopher M. Ault and I am a Salt Lake City custody modifications attorney. What if My Ex Fails to Pay Child Support in Utah? When it comes to divorce, few issues are more sensitive or as complex than child support. 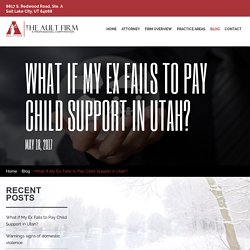 But it is one of the most important and necessary components of a divorce settlement. The court’s main objective is to always rule in the best interest of the child. Warnings Signs of Domestic Violence. Although relationships can be complicated at times, domestic violence is another level of arguing that has nothing to do with the couple’s common daily struggles. 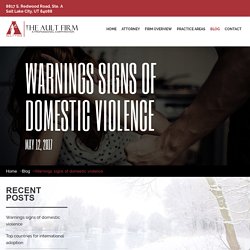 This is a pattern of abuse that should be dealt with before it’s too late. Domestic violence can be both physical and emotional. It’s basically one of the partners trying to control the behavior of the other. It generally starts with subtle behaviors until it escalates to physical abuse and violent acts. SALT LAKE CITY MEDIATION ATTORNEY - Salt Lake City Divorce Lawyers. Marriage can often get complicated. 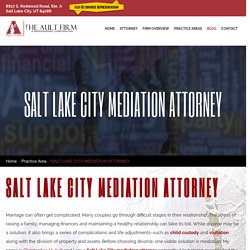 Many couples go through difficult stages in their relationship. The stress of raising a family, managing finances and maintaining a healthy relationship can take its toll. While divorce may be a solution, it also brings a series of complications and life adjustments–such as child custody and visitation along with the division of property and assets. Top countries for international adoption - Salt Lake City Divorce Lawyers. There are many kids out there waiting for a family to provide them with a home and the love and care every child deserves. 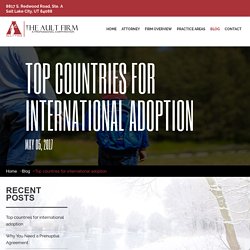 In their eyes you can see the yearning to belong somewhere. Perhaps you are one of those people who has reached a certain age and haven’t been able to have biological children. There is good news for you! Salt Lake City Paternity Attorney. One of the most important aspects of family law in Utah is the protection of children. 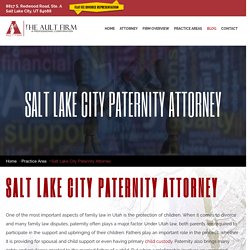 When it comes to divorce and many family law disputes, paternity often plays a major factor. Under Utah law, both parents are required to participate in the support and upbringing of their children. Fathers play an important role in the process, whether it is providing for spousal and child support or even having primary child custody. Paternity also brings many rights and privileges granted to the married father of a child. Why You Need a Prenuptial Agreement - Salt Lake City prenuptial agreement attorney. One of the biggest myths about marriage is only the wealthy need a prenuptial agreement.

Nothing could be further from the truth. It may have been a stereotype at one time. But if you have investments or any significant assets, it is vital to make sure you are protected in the event of a divorce. What happens when your ex can’t afford child support. Some parents going through a divorce may feel the amount of child support they have to pay is too overwhelming. Although divorcees generally agree on matters of child support, some may struggle a bit with their finances. They are unable to fulfill their obligations as stated in the agreement and fail to make the required payments.

SALT LAKE CITY PRENUPTIAL AGREEMENTS ATTORNEY - Salt Lake City Divorce Lawyers. Divorce is not a game. Virtually everything you have worked hard to attain could be taken away. Your estate, vehicles and investments could all be at stake. That is why it is important to properly protect yourself with a prenuptial agreement. Divorce Attorney Salt Lake City. Child Custody Attorney Salt Lake City. Parents are very important in their children’s lives. When a tragic event such as a divorce occurs, children may need their parents’ support and care more than ever before. This is why joint child custody may be the most beneficial approach to a divorce.

Joint physical custody is not always possible. The child generally ends up having more time with one parent than the other. The location and circumstances surrounding the divorce play an important role in making those decisions. Among some of the common benefits of joint physical custody include: Children get to live with both parents – This allows children to keep a strong and balanced relationship with both parents.

Some disadvantages. SALT LAKE CITY UNCONTESTED DIVORCE ATTORNEY - Salt Lake City Divorce Lawyers. Not every divorce in Salt Lake City has to be filled with conflict, disputes and acrimony. Although the end of a marriage can be a heartbreaking experience for both parties, many divorcing couples simply want to move on with their lives. But even when both parties agree on the division of assets, child custody and visitation arrangements, it is important to have the right lawyer on your side to make the process as smooth as possible. Why Common Law Marriage is Complicated in Utah - Salt Lake City Divorce Lawyers.

Divorce Decree Modification Lawyer, Utah. What Every Unwed Father Should know About Paternity - Salt Lake City Divorce Lawyers. Warning Signs of Domestic Violence - Salt Lake City Divorce Lawyers. New Legislation a Victory for Utah Disabled Parents Seeking Child Custody – The Ault Firm. There are few things more precious than the bond between a parent and their child. When it comes to divorce, child custody is one of the most complex issues. Among the most controversial involve disabled parents and their rights to child custody. Under present Utah law, disabled parents are considered less capable than those without handicaps. It can often become a huge deciding factor in child custody cases. On February the State Senate Committee approved a bill that would prevent judges from using a parent’s disability to rule against them in a child custody case.

The bill (HB150) was introduced by state representative Patrice Arent (D-Millcreek) and reverses any presumption that requires judges to use disability as a reason to determine whether a parent can provide for their child’s emotional and physical needs. The plight of disabled parents often been overlooked. The approval of Senate Bill HB150 is a positive step to end discrimination for disabled parents. Like this: What Every Unwed Father Should know About Paternity - Salt Lake City Divorce Lawyers.