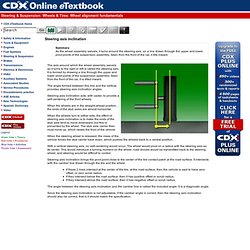 Ball joint. A typical ball joint with cutaway view (right) In an automobile, ball joints are spherical bearings that connect the control arms to the steering knuckles. 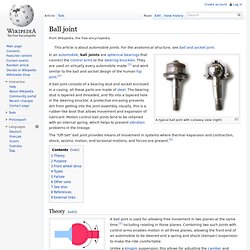 They are used on virtually every automobile made [1] and work similar to the ball and socket design of the human hip joint.[2] A ball joint consists of a bearing stud and socket enclosed in a casing; all these parts are made of steel. The bearing stud is tapered and threaded, and fits into a tapered hole in the steering knuckle. A protective encasing prevents dirt from getting into the joint assembly. The "Off-Set" ball joint provides means of movement in systems where thermal expansion and contraction, shock, seismic motion, and torsional motions, and forces are present.[3] Theory[edit] Ball joints allow a limited range of smooth movement in all directions. Ball joint. EZ Aline: Easy Adjusting Camber and Caster. Beam axle. Implementation[edit] With a beam axle the camber angle between the wheels is the same no matter where it is in the travel of the suspension. 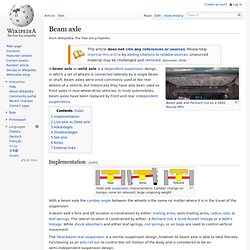 A beam axle's fore and aft location is constrained by either: trailing arms, semi-trailing arms, radius rods, or leaf springs. The lateral location is constrained by either: a Panhard rod, a Scott Russell linkage or a Watt's linkage. While shock absorbers and either leaf springs, coil springs, or air bags are used to control vertical movement. Rubber Gaiters / Gaitors for Motorcyles and bikes. Car Tyres Fitting and Wheel Alignment Specialists. Independent suspension. A multi-link type rear independent suspension on an AWD car. 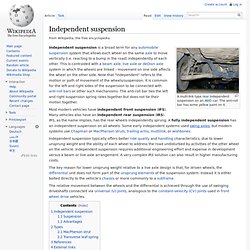 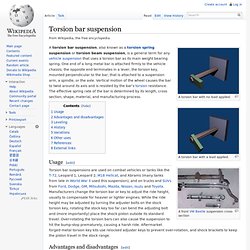 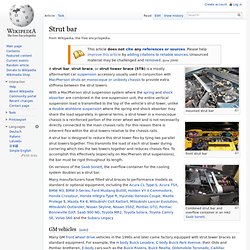 A strut bar is designed to reduce this strut tower flex by tying two parallel strut towers together. How Does a Car's Steering Column Work? How a Steering Gearbox Works. Ackermann steering geometry. Ackermann geometry Ackermann steering geometry is a geometric arrangement of linkages in the steering of a car or other vehicle designed to solve the problem of wheels on the inside and outside of a turn needing to trace out circles of different radius. 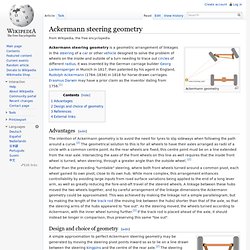 It was invented by the German carriage builder Georg Lankensperger in Munich in 1817, then patented by his agent in England, Rudolph Ackermann (1764–1834) in 1818 for horse-drawn carriages. Erasmus Darwin may have a prior claim as the inventor dating from 1758.[1] Advantages[edit] The intention of Ackermann geometry is to avoid the need for tyres to slip sideways when following the path around a curve.[2] The geometrical solution to this is for all wheels to have their axles arranged as radii of a circle with a common centre point. Caster angle. Θ is the caster angle, the red line is the pivot line, and the grey area is the tire. 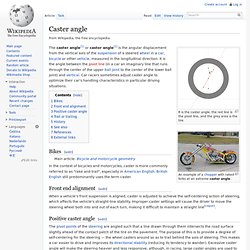 Bikes[edit] In the context of bicycles and motorcycles, caster is more commonly referred to as "rake and trail", especially in American English. British English still predominantly uses the term caster. Camber angle. EATON Detroit Spring - The leading manufacturer of leaf and coil springs for the street rod and restoration industries. Dampers: Shocks" Unless a dampening structure is present, a car spring will extend and release the energy it absorbs from a bump at an uncontrolled rate. 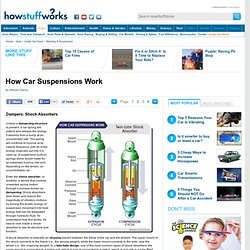 The spring­ will continue to bounce at its natural frequency until all of the energy originally put into it is used up. A suspension built on springs alone would make for an extremely bouncy ride and, depending on the terrain, an uncontrollable car. Enter the shock absorber, or snubber, a device that controls unwanted spring motion through a process known as dampening. Shock absorbers slow down and reduce the magnitude of vibratory motions by turning the kinetic energy of suspension movement into heat energy that can be dissipated through hydraulic fluid.

To understand how this works, it's best to look inside a shock absorber to see its structure and function. How Car Suspensions Work". Photo courtesy Honda Motor Co., Ltd.Double-wishbone suspension on Honda Accord 2005 Coupe. 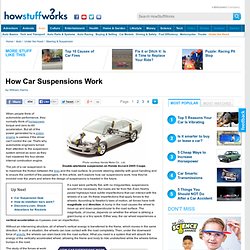 When people think of automobile performance, they normally think of horsepower, torque and zero-to-60 acceleration. But all of the power generated by a piston engine is useless if the driver can't control the car. That's why automobile engineers turned their attention to the suspension system almost as soon as they had mastered the four-stroke internal combustion engine.