How VR Gaming will Wake Us Up to our Fake Worlds. “It has no relationship whatsoever to anything anchored in some kind of metaphysical superspace. 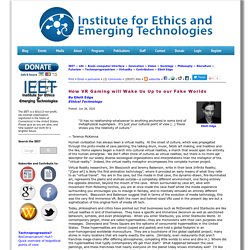 It’s just your cultural point of view […] Travel shows you the relativity of culture.” — Terence McKenna Human civilization has always been a virtual reality. At the onset of culture, which was propagated through the proto-media of cave painting, the talking drum, music, fetish art making, oral tradition and the like, Homo sapiens began a march into cultural virtual realities, a march that would span the entirety of the human enterprise. We don’t often think of cultures as virtual realities, but there is no more apt descriptor for our widely diverse sociological organizations and interpretations than the metaphor of the “virtual reality.” Virtual Reality researchers, Jim Blascovich and Jeremy Bailenson, write in their book Infinite Reality; “[Cave art] is likely the first animation technology”, where it provided an early means of what they refer to as “virtual travel”.

Baruch Spinoza. Baruch Spinoza (/bəˈruːk spɪˈnoʊzə/;[4] Dutch: [baːˈrux spɪˈnoːzaː]; born Benedito de Espinosa, Portuguese: [bɨnɨˈðitu ðɨ ʃpiˈnɔzɐ]; 24 November 1632 – 21 February 1677, later Benedict de Spinoza) was a Dutch philosopher of Sephardi/Portuguese origin.[3] By laying the groundwork for the 18th-century Enlightenment[5] and modern biblical criticism,[6] including modern conceptions of the self and the universe,[7] he came to be considered one of the great rationalists of 17th-century philosophy.[8] Biography[edit] Family and community origins[edit] Will Durant. William James Durant (/dəˈrænt/; November 5, 1885 – November 7, 1981) was an American writer, historian, and philosopher. 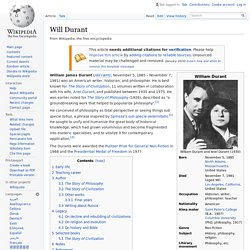 He is best known for The Story of Civilization, 11 volumes written in collaboration with his wife, Ariel Durant, and published between 1935 and 1975. He was earlier noted for The Story of Philosophy (1926), described as "a groundbreaking work that helped to popularize philosophy".[1] He conceived of philosophy as total perspective or seeing things sub specie totius, a phrase inspired by Spinoza's sub specie aeternitatis.[2] He sought to unify and humanize the great body of historical knowledge, which had grown voluminous and become fragmented into esoteric specialties, and to vitalize it for contemporary application.[3] Music conspiracy to detune us from natural 432 Hz harmonics?

Most music worldwide has been tuned to 440 hertz since the International Standards Organization (ISO) endorsed it in 1953. 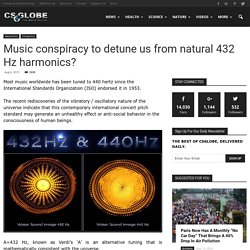 The recent rediscoveries of the vibratory / oscillatory nature of the universe indicate that this contemporary international concert pitch standard may generate an unhealthy effect or anti-social behavior in the consciousness of human beings. A=432 Hz, known as Verdi’s ‘A’ is an alternative tuning that is mathematically consistent with the universe. Music based on 432 Hz transmits beneficial healing energy, because it is a pure tone of math fundamental to nature. There is a theory that the change from 432 Hz to 440 Hz was dictated by Nazi propaganda minister, Joseph Goebbels. He used it to make people think and feel a certain manner, and to make them a prisoner of a certain consciousness.

The String, Atom of Life [Soul], Consciousness and Future Technologies. Table of Contents- The Secret Teachings of All Ages. In the Beginning was the Word. Wonders of Antiquity - The Secret Teachings of All Ages. THE SECRET DOCTRINE. Esotericism. Arianism. Jordan Maxwell - Secrets of Planet Earth Revealed. Theology and Science in the Thought of Francis Bacon - Steven Matthews - Google Books. Sharing Religious Faith Online. In an average week, one-in-five Americans share their religious faith online, about the same percentage that tune in to religious talk radio, watch religious TV programs or listen to Christian rock music. 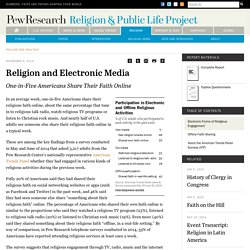 And nearly half of U.S. adults see someone else share their religious faith online in a typical week. These are among the key findings from a survey conducted in May and June of 2014 that asked 3,217 adults from the Pew Research Center’s nationally representative American Trends Panel whether they had engaged in various kinds of religious activities during the previous week. Fully 20% of Americans said they had shared their religious faith on social networking websites or apps (such as Facebook and Twitter) in the past week, and 46% said they had seen someone else share “something about their religious faith” online. The survey also finds that young adults (ages 18-29) are about twice as likely as Americans ages 50 and older to see people sharing their faith online.

Cathars and Cathar Beliefs in the Languedoc. Arianism - Theology Wiki. Arianism was a Christological view held by followers of Arius, a Christian priest who lived and taught in Alexandria, Egypt, in the early 4th century. 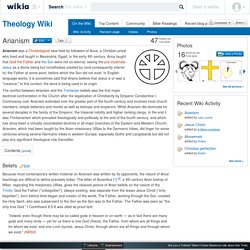 Arius taught that God the Father and the Son were not co-eternal, seeing the pre-incarnateJesus as a divine being but nonetheless created by (and consequently inferior to) the Father at some point, before which the Son did not exist. In English-language works, it is sometimes said that Arians believe that Jesus is or was a "creature;" in this context, the word is being used in its origin.