A Quick Guide to Indian Food & Dining. India is home to a plethora of recipes, tastes, and styles of cooking. 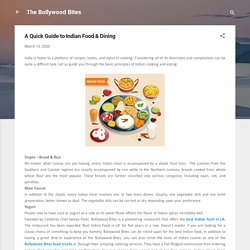 Considering all of its diversities and complexities can be quite a difficult task. Let us guide you through the basic principles of Indian cooking and eating: Staple – Bread & Rice No matter what cuisine are you having, every Indian meal is accompanied by a staple food item. The cuisines from the Southern and Coastal regions are usually accompanied by rice while in the Northern cuisines; breads cooked from whole wheat flour are the most popular. Main Course In addition to the staple, every Indian meal involves one or two main dishes.

Yogurt People love to have curd or yogurt as a side as its sweet flavor offsets the flavor of Indian spices incredibly well. FREE Delivery on All Orders above $50 - Order Now. Don't Let Corona Virus Keep You From Giving In To Your Indian Food Cravings : bollywood_bites. Best Affordable Catering Service in Los Angeles. Catering Services In La. Voted “Best Indian Food in LA” 5 Years in A Row, Chef Sanjay Patel’s Food Speaks for Itself. Founded by celebrity chef Sanjay Patel, Bollywood Bites is a pioneer food restaurant that serves delightful Indian delicacies in Los Angeles. 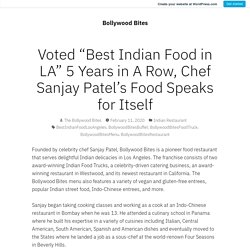 The franchise consists of two award-winning Indian Food Trucks, a celebrity-driven catering business, an award-winning restaurant in Westwood, and its newest restaurant in California. The Bollywood Bites menu also features a variety of vegan and gluten-free entrees, popular Indian street food, Indo-Chinese entrees, and more. Sanjay began taking cooking classes and working as a cook at an Indo-Chinese restaurant in Bombay when he was 13. He attended a culinary school in Panama where he built his expertise in a variety of cuisines including Italian, Central American, South American, Spanish and American dishes and eventually moved to the States where he landed a job as a sous-chef at the world-renown Four Seasons in Beverly Hills.

Like this: Like Loading... Catering Services In La. Best Sherman Oaks Indian Restaurant. The Story of Gulab Jamun - The Most Celebrated Indian Desserts. From the rasgulla and the modak to jalebi and gajar ka halwa, Indian desserts can make most of us go weak in the knees. 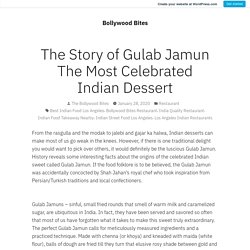 However, if there is one traditional delight you would want to pick over others, it would definitely be the luscious Gulab Jamun. History reveals some interesting facts about the origins of the celebrated Indian sweet called Gulab Jamun. If the food folklore is to be believed, the Gulab Jamun was accidentally concocted by Shah Jahan’s royal chef who took inspiration from Persian/Turkish traditions and local confectioners. Gulab Jamuns – sinful, small fried rounds that smell of warm milk and caramelized sugar, are ubiquitous in India. In fact, they have been served and savored so often that most of us have forgotten what it takes to make this sweet truly extraordinary.

Infused with rose-scented (or cardamom-flavored) chashni (sugar syrup), the ball yields to the slightest pressure, literally melting away as one takes a bite. Like this: Like Loading... The Story of Gulab Jamun The Most Celebrated Indian Dessert – Bollywood Bites. Wedding Catering Services Los Angeles. Food Trucks are here to stay for a Long Time – Here’s why! Let us look at the main factors why food trucks aren’t going away anytime soon – Food trucks give an inexpensive meal for the budget-conscious foodie. 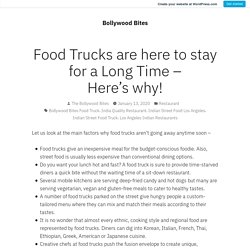 Also, street food is usually less expensive than conventional dining options.Do you want your lunch hot and fast? A food truck is sure to provide time-starved diners a quick bite without the waiting time of a sit-down restaurant.Several mobile kitchens are serving deep-fried candy and hot dogs but many are serving vegetarian, vegan and gluten-free meals to cater to healthy tastes.A number of food trucks parked on the street give hungry people a custom-tailored menu where they can mix and match their meals according to their tastes.It is no wonder that almost every ethnic, cooking style and regional food are represented by food trucks. 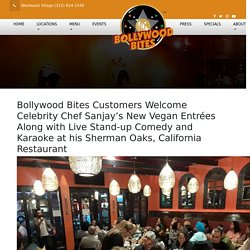 LOS ANGELES, CALIFORNIA—In August, 2018, Celebrity Chef Sanjay Patel launched a new menu at both Bollywood Bites restaurants featuring a new vegan-friendly menu—combined with offering the Sherman Oaks restaurant as a destination for stand-up comedy, karaoke and cooking classes located at 13355 Ventura Blvd. The September events at the Sherman Oaks location include Karaoke Night September 14th, Comedy Night September 21st and “Cooking with Chef Sanjay” September 29th. Details for each event can be found at www.BollywoodBites.Eventbrite.com. Chef Sanjay Patel, dubbed “Hollywood’s Prince of the Palate,” is grateful that the community has taken so well to the new menu items as well as the new events line-up. Sherman Oaks and Los Angeles. BOLLYWOOD BITES IN WESTWOOD VILLAGE 1051 Gayley Avenue, Los Angeles, CA-90024 (310)824-1046. 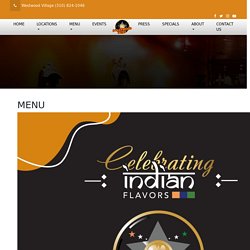