NFL Player Contract. We Asked 14 Retired NFL Players: Would You Do It Again? NFL Sporting News: NFL Injuries. Most reports of NFL injuries (as mentioned on chillicothegazette.com) rarely make it beyond NFL Sporting News, but recently reader Vanessa C. 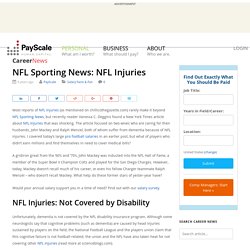 Deggins found a New York Times article about NFL injuries that was shocking. The article focused on two wives who are caring for their husbands, John Mackey and Ralph Wenzel, both of whom suffer from dementia because of NFL injuries. I covered today’s large pro football salaries in an earlier post, but what of players who didn’t earn millions and find themselves in need to cover medical bills? A gridiron great from the ’60’s and ’70’s, John Mackey was inducted into the NFL Hall of Fame, a member of the Super Bowl V Champion Colts and played for the San Diego Charges. However, today, Mackey doesn’t recall much of his career, or even his fellow Charger teammate Ralph Wenzel – who doesn’t recall Mackey. Would your annual salary support you in a time of need? 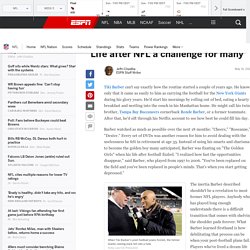 He knows only that it came as easily to him as carrying the football for the New York Giants during his glory years. He'd start his mornings by rolling out of bed, eating a hearty breakfast and nestling into the couch in his Manhattan home. He might call his twin brother, Tampa Bay Buccaneers cornerback Ronde Barber, or a former teammate. After that, he'd sift through his Netflix account to see how best he could fill his day. Barber watched as much as possible over the next 18 months: "Cheers," "Roseanne," "Dexter. " The inertia Barber described shouldn't be a revelation to most former NFL players. Terrell Owens hasn't officially retired yet, and he already has blown the $80 million he earned during his career. Do no harm: Retired NFL players endure a lifetime of hurt. NFL News: NFL Players Deserve Higher Pay Because Of Injury Risk: New York Giants Star. Stating that American pro football has more of a risk of injury than other sports, New York Giants wide receiver Odell Beckham Jr. says that National Football League players need to get paid more compared to players in other professional leagues. 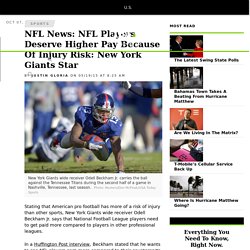 In a Huffington Post interview, Beckham stated that he wants to see NFL players earn more compared to their counterparts in the National Basketball Association, Major League Baseball and National Hockey League. “I think that we should make more money, personally. I understand that basketball plays 80-something games, baseball plays this many games, soccer plays that many games, but this is a sport where there’s more injuries,” Beckham said in the article. “There’s more collisions. It’s not even a full-contact sport, I would call it a full-collision sport. NBA and NHL teams play 82 regular-season games and MLB teams play 162 regular-season games per season.

NFL players take all the risks; NBA players make all the money. Reggie Williams, the former linebacker of the Cincinnati Bengals and former executive at Walt Disney World, doesn't begrudge current NBA players for making so much more than their NFL counterparts, but he does acknowledge the moral and medical flaw in the system. 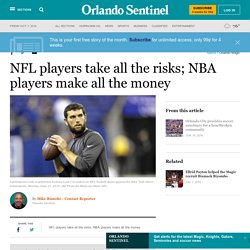 "NFL players are the guinea pigs for the continual medical and technological advances for all of mankind," cracks Williams, who at age 61 has had 24 surgeries on his right knee, a knee replacement on his left leg, bone spurs taken out of his feet, an aorta dissection and a stroke. These medical maladies are among the many reasons so many NFL players sit in wishful, wide-eyed wonderment as they see the insane money being thrown out during the NBA free agency signing period.

It all started when journeyman center Timofey Mozgov came out of the box on the first day of free agency and signed a four-year deal with the Lakers worth $64 million guaranteed — and it hasn't stopped since. And former NFL punter Pat McAfee: "Hey NFLPA ...