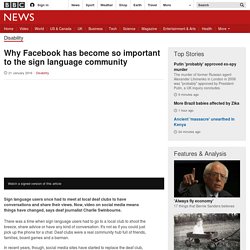 Now, video on social media means things have changed, says deaf journalist Charlie Swinbourne. There was a time when sign language users had to go to a local club to shoot the breeze, share advice or have any kind of conversation. It's not as if you could just pick up the phone for a chat. Deaf clubs were a real community hub full of friends, families, board games and a barman.

In recent years, though, social media sites have started to replace the deaf club, with Facebook leading the way. How to meditate (in British Sign Language) World Deaf Youth Can! Educational Signbank - deafConnectEd. What is Auslan Signbank? 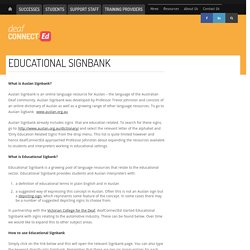 Auslan Signbank is an online language resource for Auslan – the language of the Australian Deaf community. Auslan Signbank was developed by Professor Trevor Johnston and consists of an online dictionary of Auslan as well as a growing range of other language resources. To go to Auslan Sigbank: www.auslan.org.au Auslan Signbank already includes signs that are education related. To search for these signs, go to: and select the relevant letter of the alphabet and ‘Only Education Related Signs’ from the drop menu. What is Educational Sigbank? Amanda Everitt: Find out the sign names for the Greek Gods! How many times have you struggled with signing the names of things you know little about? 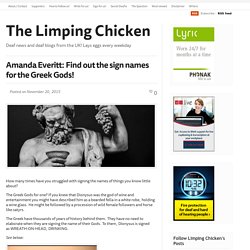 The Greek Gods for one? If you knew that Dionysus was the god of wine and entertainment you might have described him as a bearded fella in a white robe, holding a wine glass. He might be followed by a procession of wild female followers and horse like satyrs. The Greek have thousands of years of history behind them. How to be mindful – a guide in sign language. We often forget to stop and appreciate the good things around us, like the taste of our food or the clouds in the sky. 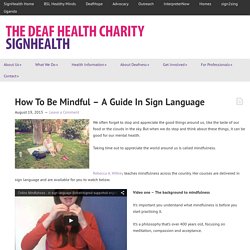 But when we do stop and think about these things, it can be good for our mental health. Taking time out to appreciate the world around us is called mindfulness. Rebecca A. Withey teaches mindfulness across the country.

"Painting pictures in the air": do we really understand sign language poetry?... Christmas. Deaf communication. Improving BSL Skills Workshop - using non-manual features Presented on 27 February 2002 Classifiers A classifier marks out a referent as belonging to a particular group or category. 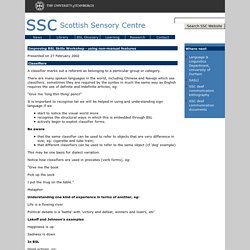 There are many spoken languages in the world, including Chinese and Navajo which use classifiers: sometimes they are required by the syntax in much the same way as English requires the use of definite and indefinite articles, eg: BSL Bloopers Part 1. A New Tune: There Is Intonation in Sign Language Too. Newswise — Like the intonation of individual spoken languages, sign languages also have their own unique “sound”, and, as with spoken languages, the intonation of one community’s language is different from that of another community, according to a new study at the University of Haifa. 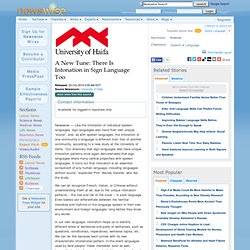 “Our discovery that sign languages also have unique intonation patterns once again demonstrates that sign languages share many central properties with spoken languages. It turns out that intonation is an essential component of any human language, including languages without sound,” explained Prof. Wendy Sandler, who led the study. We can all recognize French, Italian, or Chinese without understanding them at all, due to the unique intonation patterns -- the rise and fall of the voice -- in each language. Even babies can differentiate between the familiar melodies and rhythms of the language spoken in their own environment and foreign languages, long before they know any words. Prof. According to Prof. New living dictionary for British Sign Language.

Now anyone with an interest in British Sign Language (BSL) will have access to the first ever usage-based dictionary created at one of the world’s leading research Universities. 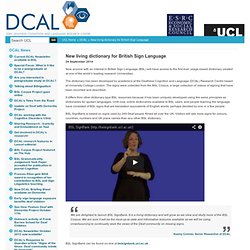 The dictionary has been developed by academics at the Deafness Cognition and Language (DCAL) Research Centre based at University College London. The signs were collected from the BSL Corpus, a large collection of videos of signing that have been recorded and described. It differs from other dictionary type BSL resources because it has been uniquely developed using the same principles as dictionaries for spoken languages. Until now, online dictionaries available to BSL users, and people learning the language, have consisted of BSL signs that are translation equivalents of English words, perhaps decided by one or a few people. Home. Should there be a TV channel just for sign language users? 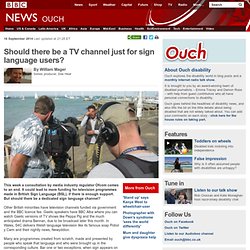 It could lead to more funding for television programmes made in British Sign Language (BSL), if there is enough support. But should there be a dedicated sign language channel? Other British minorities have television channels funded via government and the BBC licence fee. Many are programmes created from scratch, made and presented by people who speak that language and who were brought up in the corresponding culture. On a dedicated BSL channel, the newsreader would sign, and half-time sports analysis would come from a sofa full of people using their hands rather than their mouths. Continue reading the main story.

Bullying BSL. We want to make sure everyone can access the information provided on this site We've put together a few tips and help for you. 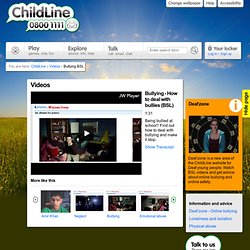 Please send us a message if you can't find what you're looking for. Or you have a suggestion of something we could include. Using the keyboard instead of the mouse.As well as using the tab key to navigate through the screen, the ChildLine website has special access keys: Alt+S = skip navigationAlt+1 = homeAlt+0 = accessibility information. Is the text size too large or too small? In Internet Explorer, go to View > Text size and select your desired text size setting (eg, larger, smaller). In Firefox, go to View > Text size and increase/decrease using Ctrl and + or - If you have a scroll wheel on your mouse, you can hold down Ctrl and scroll back or forth to increase or decrease the font size in both IE and Firefox. On an Apple Mac, you can use the Monitor & Sound Control Panel to change the resolution. 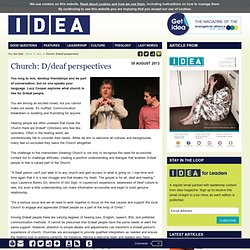 Lucy Cooper explores what church is like for D/deaf people. You are among an excited crowd, but you cannot make out words, it's muffled. Communication breakdown is isolating and frustrating for anyone. Hearing people are often unaware that inside the Church there are D/deaf* Christians who feel like outsiders. Often in the hearing world, we unintentionally fail to consider their needs.

Tv - watch video guides: BSL - Open days. BBC Radio 4 Extra - The Generation Gap, Series 4: Money, Student Budget. BSL QED : Homepage. Facial expressions emotions and sign languages- Elliot and Jacobs. Advice in BSL. Introduction to information in British Sign Language (BSL) on benefits, debt, education, employment and how a Citizens Advice Bureau can help you. Find out what your local Citizens Advice Bureau can do for you. This film tells you how to contact your local Bureau, and about the service you will receive. Benefits advice in BSL. Bsl act. “We want more than an Act of Parliament” says Sarah Batterbury, BDA expert Next week the BDA (British Deaf Association) launch Sign Language Week with the theme of ‘Strengthening Our Rights’. Planned to coincide with the anniversary of the official recognition of British Sign Language in 2003, a range of activities are planned including Deaf Lobby Day, where deaf people will meet MPs in Westminster Hall and the […]