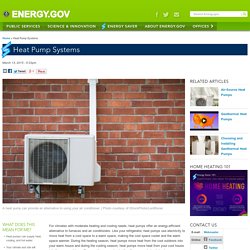 If you heat with electricity, a heat pump can trim the amount of electricity you use for heating by as much as 30% to 40%. For more information on these specific types of heat pumps, go to:

Powderpost beetles. This Woman’s Gruesome Selfie Will Have You Reaching Frantically for Sunscreen. Untitled. Why It’s Worse to Be Bullied by Kids Than Abused by Adults. As anyone who has ever been the target of a bully knows, being picked on or harassed is a pretty traumatic experience. 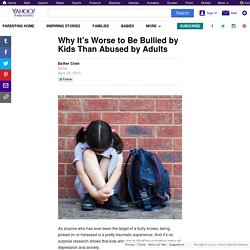 And it’s no surprise research shows that kids who are bullied have higher rates of depression and anxiety. STORY: After Her Son Was Bullied, Mom Sues School District But a new study puts the damage in perspective in an alarming new way. Kids who are taunted or excluded by their peers suffer more long-term emotional fallout in adulthood than do kids who were abused by grown-ups. The study looked at previous data covering more than 5,000 parents and kids from two studies going back to the early 1990s. The results: adults who were bullied in childhood were approximately five times more likely to have anxiety, and twice as likely to describe themselves as depressed, compared to kids who were emotionally, physically, or sexually abused or neglected by adults when they were young. Secret Cell Plans Offer Big Savings. GlassesUSA.com Blog - Recent Posts - Cutting the Cost of Prescription Glasses. 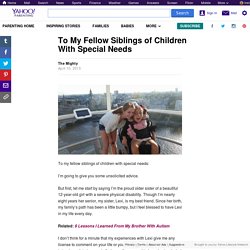 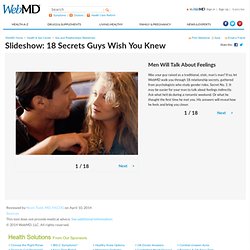 " 39 Powerful Quotes That Will Change the Way You Live and Think. Garlic, Onions and Cow Stomach: A Medieval Solution for Modern Superbugs. An interdisciplinary team of Anglo-Saxon experts and microbiologists have discovered a treatment against modern antibiotic-resistant superbugs in an unlikely place: a 1,000-year-old leatherbound volume called Bald’s Leechbook. 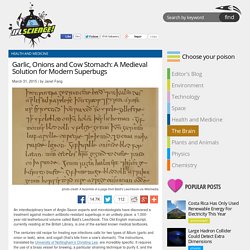 This Old English manuscript, currently residing at the British Library, is one of the earliest known medical textbooks. The centuries-old recipe for treating eye infections calls for two types of Allium (garlic and onion or leek), wine, and oxgall (that’s bile from a cow’s stomach). The instructions, translated by University of Nottingham’s Christina Lee, are incredibly specific: It requires the use of a brass vessel for brewing, a particular straining technique to purify it, and the mixture must be left for nine days before use. 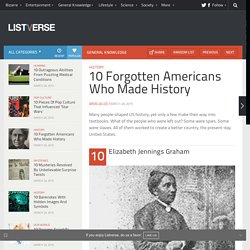 Child with autism improves with antibiotic; prompts new investigations into autism. John Rodakis, the parent of a child with autism was not looking to launch an international investigation into the microbiome (the collection of microorganisms that live on and in us) and autism, but, as he describes in his newly published article in the scientific journal Microbial Ecology in Health and Disease, when his young son's autism unexpectedly and dramatically improved while taking an antibiotic for strep throat, he began a quest to understand why. 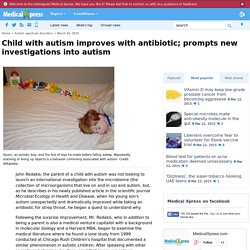 Following the surprise improvement, Mr. Opossums could save you from that deadly snake bite - CNET. That's right, opossums. 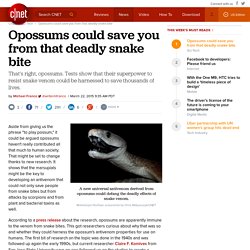 Tests show that their superpower to resist snake venom could be harnessed to save thousands of lives. more + Aside from giving us the phrase "to play possum," it could be argued opossums haven't really contributed all that much to human society. 50 Quotes That Will Inspire You to Lead From the Heart. In our business culture, and society in general, the image or metaphor of the heart is often associated with yielding, kindness -- or perhaps weakness. 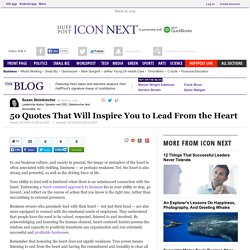 Yet, the heart is also strong and powerful, as well as the driving force of life. Your ability to lead well is hindered when there is an unbalanced connection with the heart. Embracing a heart-centered approach to business lies in your ability to stop, go inward, and reflect on the course of action that you know is the right one, rather than succumbing to external pressures. Business owners who genuinely lead with their heart -- not just their head -- are also more equipped to connect with the emotional needs of employees. They understand that people have the need to be valued, respected, listened to and involved. The Irrationality of Alcoholics Anonymous. 20 Apple keyboard shortcuts business users need to know. Image: Sarah Tew/CNET One of the most useful tools in the quest for productivity in office work is the use of keyboard shortcuts. 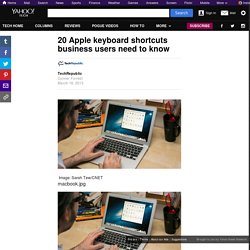 The proper shortcuts can turn your keyboard from a writing tool into a command center for your computer. The Knights Templar Maps a Plan to Fight ISIS and Win. 701years ago, on March 18th, the last Grand Master of the Knights Templar was burned at the stake in France. As he died, Jacques de Molay cursed the French king who had betrayed him, and whose own dynasty collapsed fourteen years later. That didn’t help de Molay, whose order was exterminated as a road bump in the path of French power. Today, days after the Iraqi government admitted that its attack on Tikrit has ground to a halt, the death of the Templars offers lessons on how to fight the Islamic State, an entity they would have recognized very well. The only successes against ISIS have come at the hands of expressly ethno-sectarian troops—not states you could identify on a Google map: the Shiite militias and Iranian advisors that accompany the Iraqi army into battle, the Alawi Syrians and their Hezbollah allies, or the Kurds fighting, with a wink, for the Iraqi state.

6 Potent Cleaners You Didn't Know You Had. By Jennifer Noonan More and more people are steering away from commercial cleaners with their harsh chemicals and opting for more natural choices to get their homes spotless. While it may seem excessive to make a whole pantry’s worth of cleaners from scratch, using cleaning solutions made from common ingredients you probably already own can be both safer and more cost-effective. This Chemical Reaction Made People Think Satan Was Attacking. Study of baby horses' behavior triggers new autism research. SACRAMENTO, Calif. — On a thoroughbred ranch in Vacaville, a 3-week-old foal gallops close to its mother.

Their bond seems natural, but it didn't start out that way. When the foal was born, it completely ignored its mother and refused to nurse. University of California, Davis veterinary specialist John Madigan intervened moments after the birth with a novel treatment he calls "the squeeze. " All the Ways to Sharpen Your Knives. Where Have All The Teachers Gone? : NPR Ed. This is the canary in the coal mine.

Where Have All The Teachers Gone? : NPR Ed.

How-to-make-the-worlds-best-paper-airplane-have-112175401595. How to give your home to your children tax-free. Shutterstock Before the days of estate taxes, children simply moved into the family home and took over the master bedroom after their parents died. Is-this-dress-blue-and-black-or-white-and-gold-112194158507. Brothers Recreate Childhood Portraits at Target (Nailed It!) Theaters.