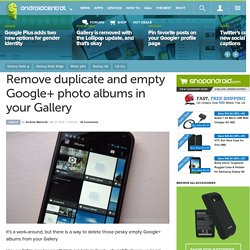 Don't worry, you're not alone. Since the implementation of Google+ Instant Upload and its deep integration into the included Gallery app, more and more of the photos you see on your device aren't actually... on your device. This all works great until there's an issue -- and what many people have been experiencing is duplicate, blank, and mislabeled albums showing up in their Gallery. The problem is there's no way from the Gallery to manage these photos, it has to be done on the web. Chrome for Mobile. One browser for your laptop, phone and tablet Get mobile app Download for Android Download for iOS Browse faster on-the-go Search instantly Search and navigate from the same box. 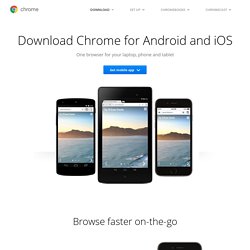 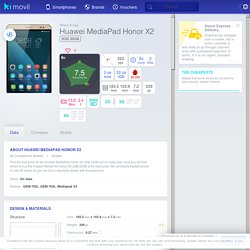 Here you will find where to buy the Huawei MediaPad Honor X2 2GB 32GB at the best price. We constantly tracked prices in over 80 stores so you can find a reputable dealer with the best price. Benchmarks (Phone Arena) How a Microscopic Supercapacitor Will Supercharge Mobile Electronics. Capacitors. 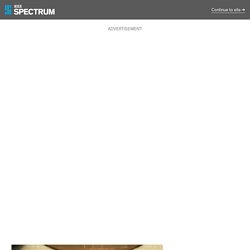 Open up your computer and they stick out like rocks on a sandy beach. They’re the one kind of electronic device that never made it to Lilliput. If they finally obeyed Moore’s Law by squeezing themselves down to the microscale, it would make life a lot easier for electronics engineers. With tiny but powerful capacitors you could make cheaper, even tinier cardiac pacemakers and computers. They’d be great in nonvolatile memory, microsensors and actuators, RFID tags, and microelectromechanical systems, applications in which the power supplies can weigh up to 10 times as much as the other parts combined. Our group at the University of California, Los Angeles, has created such microsupercapacitors using a simple DVD burner to forge the one-atom- thick sheets known as graphene on which these devices are formed, in arrays. 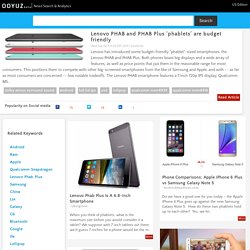 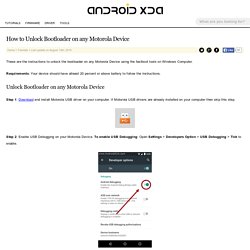 Apps. Google Wants To Speed Up The Web With Its QUIC Protocol. You may have never heard of it, but if you are a Chrome users, chances are you’ve used Google’s QUIC protocol already. 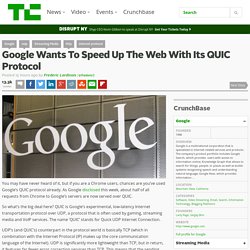 As Google disclosed this week, about half of all requests from Chrome to Google’s servers are now served over QUIC. So what’s the big deal here? QUIC is Google’s experimental, low-latency Internet transportation protocol over UDP, a protocol that is often used by gaming, streaming media and VoIP services. The name ‘QUIC’ stands for Quick UDP Internet Connection. UDP’s (and QUIC’s) counterpart in the protocol world is basically TCP (which in combination with the Internet Protocol (IP) makes up the core communication language of the Internet). With QUIC, Google aims to combine some of the best features of UPD and TCP with modern security tools. On a typical secure TCP connection, it typically takes two or three round-trips before the browser can actually start receiving data. YouTube. Testing Note Creation.

A Future Fueled by Phablets – Worldwide Phablet Shipments to Surpass Portable PCs in 2014 and Tablets by 2015, According to IDC - prUS25077914. Tablets to outsell PCs by year's end. Tablet shipments will exceed PC shipments before the year is out because consumers continue to favor mobile devices over personal computers, according to new research from IDC. 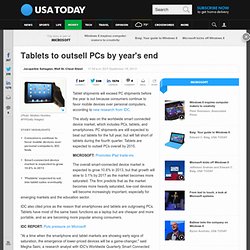 The study was on the worldwide smart connected device market, which includes PCs, tablets, and smartphones. PC shipments are still expected to beat out tablets for the full year, but will fall short of tablets during the fourth quarter. Tablets are expected to outsell PCs overall by 2015. MICROSOFT: Promotes iPad trade-ins The overall smart-connected device market is expected to grow 10.6% in 2013, but that growth will slow to 3.1% by 2017 as the market becomes more saturated. IDC also cited price as the reason that smartphones and tablets are outgrowing PCs.