What is Waterfall Model? Pros and Cons. Waterfall model is a sequential one which divides software testing and development into sequential phases in which each phase is designed to perform certain acts. 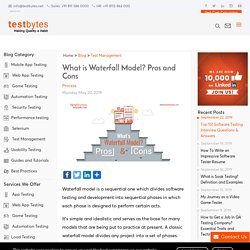 It’s simple and idealistic and serves as the base for many models that are being put to practice at present. A classic waterfall model divides any project into a set of phases. One phase can only start when the previous phase ends. Let’s have a look at the different sequential phases in a waterfall model Requirement Analysis: The capture of all the requirement from customer, deep-rooted analysis, incomplete requirement omission, brainstorming, feasibility test, etc. are carried through in this phase. After analysis, the requirements will be documented in a software requirement specification (SRS) document which serves as a contract between customer and testing company.

System Design: Design specification document will be created in this phase to outline the technical design required for commencing the project. Implementation: Smoke Testing - Explanation With Example. Smoke Testing aka Build Verification Testing is a boon for software development as it can be used as a verification method that can ensure that the product is stable and 100% functional. 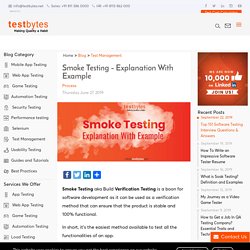 In short, it’s the easiest method available to test all the functionalities of an app. Let’s have a look at the Smoke Testing Process in detail. What is Smoke Testing? Assume you order a book from Amazon. The moment you receive the parcel, the first thing you do is to check that the parcel is addressed to you, and then make sure parcel is intact and not torn. Next, you open the parcel and see the book is what you ordered and also make sure it is new, not old. You flip through the pages to make sure everything is good. Software Testing Life Cycle (STLC) Software testing is a very important part of software development. owing to the huge demand and necessity of testing nowadays, The software testing process is now getting more intricate, and competent. 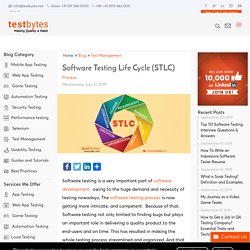 Because of that, Software testing not only limited to finding bugs but plays an important role in delivering a quality product to the end-users and on time. This has resulted in making the whole testing process streamlined and organized. And that led to the development of software testing life cycle or what is commonly known to us as STLC. Software testing life cycle is a sequential flow of various testing processes that are to be executed to ensure maximum results from software testing. STLC ensures that all the testing processes are carried out in an orderly and planned manner. We have understood that STLC is a process, now look at the different steps involved in this process: What is Compatibility Testing? Types, Process and Advantages.

Compatibility testing is a non-functional test which ensures complete and proper working of an app as expected for all desired customers. Compatibility testing is conducted in mobile applications for the following reasons:- Types of Compatibility Testing They are Two Types: Forward Testing and Backward Testing 1) Forward testing makes sure that the application is compatible with updates or newer mobile operating system versions. 2) Backward testing checks whether the mobile app has been developed for latest versions of an environment also work perfectly with the older version.

20 Steps to Configure Jenkins Email Notification. Major Cyber Attacks on India (Alarming News) - Testbytes. Cyber Attacks is an attempt to destroy or infect computer networks in order to extract or extort money or for other malicious intentions such as procuring necessary information. 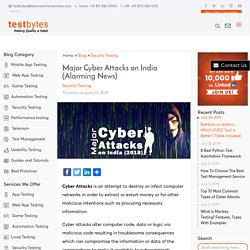 Cyber attacks alter computer code, data or logic via malicious code resulting in troublesome consequences which can compromise the information or data of the organizations to make it available to cybercriminals. Cyber attacks consist of various attacks which are hacking, D.O.S, Virus Dissemination, Credit Card Fraud, Phishing or Cyber Stalking. Out of the top 10 most targeted countries by cyber attackers, India ranks fourth and cybersecurity defenders are facing a lot of threats from these cyber criminals. cyber attacks is an illegal activity and is continuously increasing in India for financial loot. Major and Minor Cyber Attacks in India 2018 SIM Swap Fraud In August 2018, two men from Navi Mumbai were arrested for cybercrime.

Know More: 50 QA Interview Questions to Land a Job Cyber Attack on Cosmos Bank. 9 Important Things to Test in Ecommerce Web and Mobile Applications. 7 Types of Regression Testing Methods You Should Know. 11 Differences Between Verification and Validation in Software Testing. Delivering an optimum quality product, be it software or hardware, is a tedious task.

A product has to undergo and pass through various stages of planning, development and testing to ensure that the final product delivered is best in terms of quality and performance. Out of the numerous stages involved in products development, one of the common steps that are taken at every stage of the development is testing. Testing is the process that verifies and ensures that the final product delivered, meets the industry standards and specified requirements. 21 Best Programming Movies Software Testers Must Watch! Programming movies are not just meant for programmers. 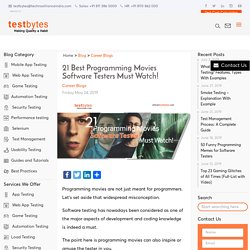 Let’s set aside that widespread misconception. Software testing has nowadays been considered as one of the major aspects of development and coding knowledge is indeed a must. The point here is programming movies can also inspire or amuse the tester in you. If you have any doubt go through this blog and find out which programming movies they are and watch it ASAP.

Cast: Justin Timberlake, Jesse Eisenberg, Andrew Garfield Director: David Fincher The programming bit in the whole movie is a bit short but since it is based on a true story, all programming sequences in the movie are on point. Black Box Testing - Techniques, Example and Types. What is black box testing? Black box testing refers to a software testing method where the SUT (Software under Test) functionality is tested without worrying about its details of implementation, internal path knowledge and internal code structure of the software. This method of testing is completely based on the specifications and requirements of the software. The focus of the black box testing is upon the output and inputs of the software system rather than the program’s internal knowledge. The system that undergoes this type of testing is considered as the “black box”, and it can be any software like a database, website or an Operating System.

Top 23 Gaming Glitches of All Times [Full-List with Video] - Testbytes. Gaming glitches are indeed deadly for any game development company. However, glitches have often worked the opposite made the company famous too. But be it any circumstances, users might never enjoy such glitches as it can hinder their gaming experience. But have you ever wonder which games have pushed the glitch scenario so far that it has become hilarious? If you don’t, read our blog and find out 1.

What’s the point in a man running on horse’s back, while the horse is also running? 2. Sometimes your favorite games can put you in a real muddle, how can your enemy still move and walk after you have cut off his torso apart from his legs and is now without the legs. 3. Assassins Creed leaves you all creepy by letting Ezio’s torso disappear and letting you watch only his legs walk. 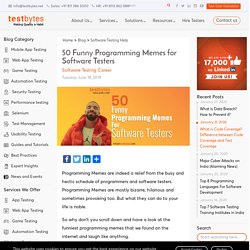 Programming Memes are mostly bizarre, hilarious and sometimes provoking too. But what they can do to your life is noble. So why don’t you scroll down and have a look at the funniest programming memes that we found on the internet and laugh like anything. 1. Don’t stress! 2.