PayPal Surges, eBay Stalls In Earnings Results. 29 Shares Share Tweet Email The eBay and PayPal quarterly earnings — even as two separate companies — are starting to sound like a (half) broken record. 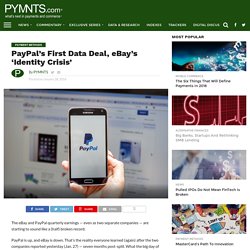 PayPal is up, and eBay is down. At least, according to one analyst, who, after seeing that eBay’s marketplace stalled again, was quoted as saying: “EBay has kind of lost its identity. The results of the two-sided earnings evening of the former duo landed them across the spectrum in after-hours trading. But the big news that came out of PayPal was an announcement that got very little play in the earnings call and one sentence in a press release: the formal agreement with First Data. 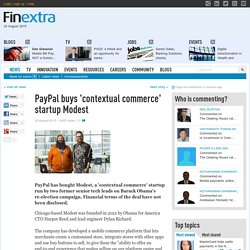 Financial terms of the deal have not been disclosed. Chicago-based Modest was founded in 2012 by Obama for America CTO Harper Reed and lead engineer Dylan Richard. The company has developed a mobile commerce platform that lets merchants create a customised store, integrate stores with other apps and use buy buttons to sell, to give them the "ability to offer an end-to-end experience that makes selling on any platform easier and simpler". Reed, Richard and their small team will join Braintree, the Chicago-based outfit PayPal acquired for $800 million in 2013. In a blog on the acquisition, PayPal's Bill Ready, who was Braintree CEO, cites the example of Buyable Pins on Pinterest, which Braintree powers, as an example of the kind of contextual commerce Modest will help with. PayPal Ties up With BlackBerry to Provide Peer-To-Peer (P2P) Payments Through BBM Chats.

BBM has partnered with PayPal to make sending and receiving money via users’ BBM Chats. 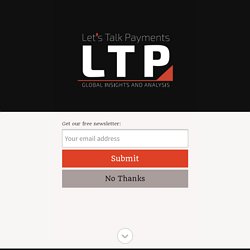 Users will now be able to connect a PayPal account to the BBM service by selecting the “Send Money” icon. The service is currently in beta version in select BBM users in Canada. PayPal’s Day One Report Card. PayPal debuted on the NASDAQ stock exchange yesterday (July 20), trading as a separate entity from eBay – and the initial impression was a positive one. 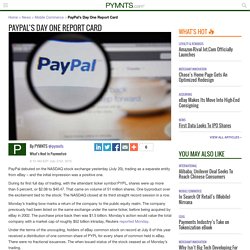 During its first full day of trading, with the attendant ticker symbol PYPL, shares were up more than 5 percent, or $2.08 to $40.47. That came on volume of 51 million shares. One byproduct over the excitement tied to the stock: The NASDAQ closed at its third straight record session in a row. Monday’s trading bow marks a return of the company to the public equity realm. The company previously had been listed on the same exchange under the same ticker, before being acquired by eBay in 2002. Under the terms of the uncoupling, holders of eBay common stock on record at July 8 of this year received a distribution of one common share of PYPL for every share of common held in eBay.

In the latest quarter, PayPal’s revenues were up 16 percent to $2.3 billion, with value of transactions growing 20 percent to $66 billion. PayPal’s New T&Cs Raises Concerns for Regulators and Investors. PayPal Ecosystem Tracker. PayPal’s Execs Describe Current Transformation as it Spins off from eBay. PayPal’s Commerce: Rewind event was held on May 21st in San Francisco where the company announced new relationships, product experiences and strategies to be able to deliver faster, safer and provide more elegant buying experiences as it prepares to become an independent, public company. 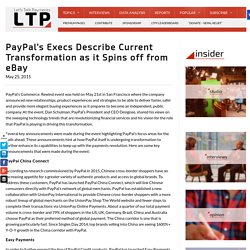 At the event, Dan Schulman, PayPal’s President and CEO Designee, shared his views on the sweeping technology trends that are revolutionizing financial services and his vision for the role that PayPal is playing in driving this transformation. Several key announcements were made during the event highlighting PayPal’s focus areas for the path ahead. These announcements hint at how PayPal itself is undergoing transformation to further enhance its capabilities to keep up with the payments revolution. Here are some key announcements that were made during the event: PayPal To Pay CFPB-Imposed Fine Of $25M For Deceptive Credit Accusations. Following an order from the Consumer Financial Protection Bureau announced Tuesday (May 19), PayPal has agreed to pay the imposed fine of $25 million related to deceptive credit accusations from the agency. 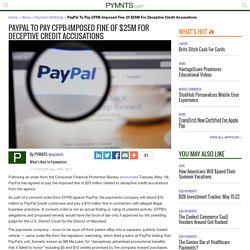 As part of a consent order from CFPB against PayPal, the payments company will refund $15 million to PayPal Credit customers and pay a $10 million fine in connection with alleged illegal business practices. A consent order is not an actual finding or ruling of unlawful activity. CFPB’s allegations and proposed remedy would have the force of law only if approved by the presiding judge for the U.S.

District Court for the District of Maryland. PayPal Credit has been around since 2008, and like many credit products, has late fee charges, interest rate penalties and other penalties tied to late or missed payments. PayPal begins piloting NFC and records 40% growth in mobile payments. By Rian Boden • nfcworld.com • Published 27 April 2015, 13:24 • Last updated 27 April 2015, 13:24 Online payments giant PayPal has revealed it is again testing NFC, though the company’s president has made clear that he’d like the company’s platform to be technology agnostic and he doesn’t see the long-term success of NFC as assured. 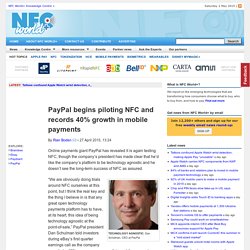 TECHNOLOGY AGNOSTIC: Dan Schulman, CEO at PayPal “We are obviously doing trials around NFC ourselves at this point, but I think the real key and the thing I believe in is that any great open technology payments platform has to have, at its heart, this idea of being technology agnostic at the point-of-sale,” PayPal president Dan Schulman told investors during eBay’s first quarter earnings call as the company recorded a 40% year-over-year growth in mobile payment transactions.

“I think if you bet on a single technology it’s a risky proposition and it takes a lot longer to move into the marketplace,” says Schulman. PayPal Brings Its Instant Checkout Service “One Touch” Across The Web. PayPal is rolling out seamless, one-touch payments across the web, allowing customers to checkout from a merchant’s website without having to enter in their user ID and password again. 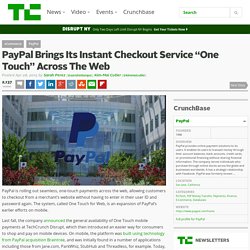 The system, called One Touch for Web, is an expansion of PayPal’s earlier efforts on mobile. Last fall, the company announced the general availability of One Touch mobile payments at TechCrunch Disrupt, which then introduced an easier way for consumers to shop and pay on mobile devices. On mobile, the platform was built using technology from PayPal acquisition Braintree, and was initially found in a number of applications including those from Jane.com, ParkWhiz, StubHub and Threadless, for example. Today, others such as Airbnb, Lyft and Munchery, are also using the system with some reporting a 50 percent increase in conversion. PayPal explains why it's buying mobile wallet provider Paydiant. By Rian Boden • nfcworld.com • Published 20 March 2015, 13:41 • Last updated 24 March 2015, 15:34 “What Paydiant has is a clarity of focus on mobile and how large merchants need to utilise mobile to connect with their customers — they’re a small company doing that very successfully with some really cool brands,” Anuj Nayar, senior director of global initiatives at PayPal, has told NFC World as the payment giant prepares to complete its acquisition of the payments platform provider for a reported US$280m. 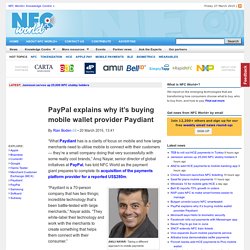 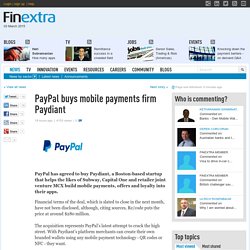 Financial terms of the deal, which is slated to close in the next month, have not been disclosed, although, citing sources, Re/code puts the price at around $280 million. PayPal's offline chief quits. The man behind PayPal's move into the bricks and mortar world, Don Kingsborough, has quit the firm, admitting it has come up short in its efforts to move beyond online payments. Kingsborough told Re/code he leaves the eBay unit "a little frustrated" and wished the executive team "would have done more". After stints at Atari and prepaid specialist Blackhawk Network, Kingsborough joined PayPal in 2011 to head up retail and prepaid products, taking the company into the offline world and challenging Visa and MasterCard. He managed to strike deals with some major retailers, such as Home Depot, to get PayPal accepted at the point-of-sale and also got some large POS manufactures onboard. In 2012 a tie-up with Discover saw PayPal tap into the card firm's network to bring acceptance of mobile wallet payments to millions of US stores.

Venmo Quarterly Growth Slows Down, as the Base Grows. Faster and easier to navigate with a crisp new look and exciting new features. Be the first to be notified when the new LTP is launched. Subscribe now! Venmo, the popular peer-to-peer payment app, processed more than $900 Mn in transactions during the fourth quarter of 2014. However, Venmo showed a slower quarter-over-quarter growth. While the company witnessed a growth rate of 50% between Q2 and Q3 of 2014, the growth rate between Q3 and Q4 was 29% only. Venmo has gained significant popularity over the past year. The following illustration shows the mobile transaction volume trend in Venmo along with quarter wise growth rates. PayPal Revs Up Retail Services. The National Retail Federation’s “Big Show” came with big announcements for PayPal as it unveiled its new retail services aimed at increasing merchant revenue and adding customer value through new credit options and business consulting.

PayPal said the new services announced Monday (Jan. 12) help the company “move credit more towards the center of [its] brand” of offering payment solutions. PayPal Credit allows merchants the ability to offer its consumers the ability to pay for their purchases in flexible monthly installments and helps merchants create better credit offerings for their customer base. More Shoppers Go Global. Cross-border e-commerce has grown so quickly that 25 percent of PayPal’s transactions are now international, with about 2,000 cross-border transactions per minute, according to the Associated Press.

A PayPal report estimates that by 2018, about 130 million shoppers will be spending over $300 billion a year across the border, up from $105 billion in 2013. Online retailers are working on fixing the biggest hurdles for international shopping: The perception that it costs a lot and takes a long time. They are handling the conversion of currency behind the scenes and giving shoppers the prices in their own currency, as well as tariffs and customs duties in the overall price of an item. 7 Moves PayPal Made that Shows Who’s The Boss. This is the season of giving and gifting.

Happy Holidays! We will give you a set of 3 whitepapers, with our compliments. Gift yourselves some great content by subscribing to our free daily newsletter. Now, that's a sweet deal! PayPal launches ‘Pay After Delivery’, 14 days Interest-Free Loans. PayPal’s Irish Pot Of Gold. PayPal’s Revenue Soars, Donahoe Backs Off NFC Nastiness. PayPal Sans eBay – Now What? Just another Tuesday in September. In case you missed it, big news was made Tuesday (Sept. 30) in payments-land. eBay and PayPal will split and become two separate, publicly traded companies sometime late in 2015.

There will be two new CEOs of these companies – both announced Tuesday (Sept. 30) as well. Paypal Statistics. PayPal Launches PassPort To Lure More International Sales From Merchants. PayPal and its owner eBay have been through a few tough rounds in the ring these last few months, facing calls from Carl Ichan to split the company (finished for now), a Twitter encounter with a departing, annoyed employee, and getting its president poached by Facebook.

Today, however, comes news of a tamer sort for the company: it is rolling out a new site called PassPort, aimed at merchants using its platform as a resource for stats, tips and general information on selling internationally. Mobile Payment Solutions. PayPal's Expanding Partner Program. PayPal Volume, Registered Accounts Increase. PayPal Volume, Registered Accounts Increase. eBay’s first quarter earnings results are out and better than analyst expectations. The eCommerce and payment leaders ended the quarter with revenues of $4.26 billion and an EPS of $0.70 – both up 14 percent over the same time period last year. PayPal’s Cash For Registers Tries To Outdo Square And Groupon With Its Own Bid To Rule The Register. PayPal Launches New Log In Platform For mCommerce Ease. By Ben Carsley, Managing Editor (@BC_PYMNTS) Walmart, First Data Say No To PayPal. (Is That Even Allowed?)