Wells Fargo to Launch Its Own Wallet Services. May 25, 2016 By : LTP Team In the past few years, we have witnessed a large number of mobile wallets that have been introduced into the mainstream. 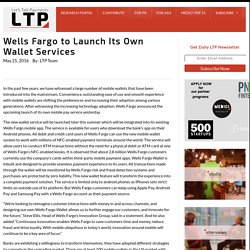 Convenience, outstanding ease of use and smooth experience with mobile wallets are shifting the preferences and increasing their adoption among various generations. After witnessing the increasing technology adoption, Wells Fargo announced the upcoming launch of its own mobile pay service yesterday. The new wallet service will be launched later this summer which will be integrated into its existing Wells Fargo mobile app.

The service is available for users who download the bank’s app on their Android phones. “We’re looking to reimagine customer interactions with money in and across channels, and designing our own Wells Fargo Wallet allows us to further engage our customers, and innovate for the future,” Steve Ellis, Head of Wells Fargo’s Innovation Group, said in a statement. Gemalto and Worldline simplify onboarding to OEM mobile wallets for banks and card issuers. By Rian Boden • nfcworld.com • Published 20 April 2016, 11:30 • Last updated 20 April 2016, 11:30 PARTNER NEWS: Digital security giant Gemalto is working alongside European payment and transactional services provider Wordline to enable the “seamless onboarding” of banks and card issuers to mobile payment wallets provided by device manufacturers. 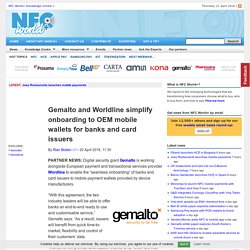 “With this agreement, the two industry leaders will be able to offer banks an end-to-end ready to use and customisable service,” Gemalto says. “As a result, issuers will benefit from quick time-to-market, flexibility and control of their customers’ data. Samsung Pay records net loss of US$16.8m in 2015. By Rian Boden • nfcworld.com • Published 8 March 2016, 13:28 • Last updated 8 March 2016, 13:28 Samsung Pay has recorded a net loss of US$16.8m since the mobile payment service was unveiled in March 2015, despite attracting approximately five million users in South Korea and the US in its first six months. 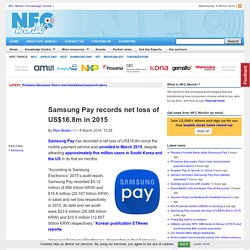 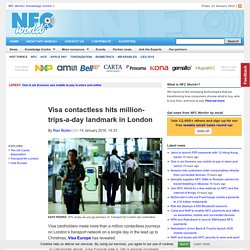 “In December alone, Visa Europe saw a 166% annual increase in the total number of journeys by people who used their Visa card to pay as they travelled, and a total spend for the year of £339m,” says Kevin Jenkins, regional managing director for the UK and Ireland at Visa Europe. “That’s 7x growth in total spend on the year. “That’s just the beginning — next year, Visa will also support Transport for London’s (TfL) launch of contactless acceptance in London’s iconic black cabs. Barclaycard begins rolling out HCE payments to mobile app. 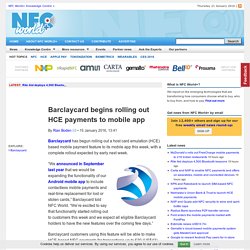 Renowned Mobile Wallets’ Presence in Different Countries. The use of contactless payments is expected to reach 200 million by the end of 2016. 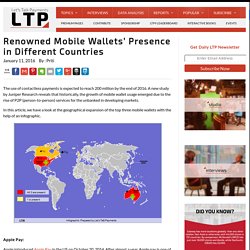 A new study by Juniper Research reveals that historically, the growth of mobile wallet usage emerged due to the rise of P2P (person-to-person) services for the unbanked in developing markets. In this article, we have a look at the geographical expansion of the top three mobile wallets with the help of an infographic. Apple Pay: Apple introduced Apple Pay in the US on October 20, 2014. After almost a year, Apple pay is one of the successful in-store payments systems in the world today. Apple Pay works with many of the major credit and debit cards, including store-issued cards, from the top UK and US banks and stores. 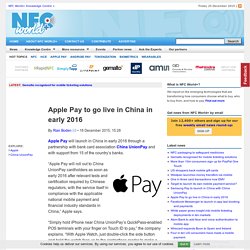 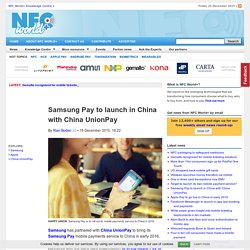 The announcement comes as Apple reveals that it has also partnered with the bank card organisation to bring Apple Pay to Chinese consumers next year. “This collaboration between Samsung and China UnionPay will enable UnionPay cardholders to manage and use credit cards and debit cards on their smartphones via Samsung Pay,” Samsung says. “Working with China UnionPay, Samsung Pay ensures secure transaction with a reliable triple-layered protection mechanism including fingerprint identification, tokenization and KNOX.” BBVA launches Wallet app in Turkey as downloads pass the one million mark. BBVA is to launch its mobile payment app in Turkey as the Spanish bank reveals more than one million downloads of the Wallet application in the two years since its launch. 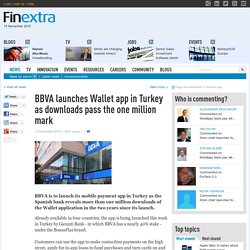 Already available in four countries, the app is being launched this week in Turkey by Garanti Bank - in which BBVA has a nearly 40% stake - under the BonusFlas brand. Customers can use the app to make contactless payments on the high street, apply for in-app loans to fund purchases and turn cards on and off for certain transactions or if a card is lost or stolen. The Turkish launch will also come with additional features, including the ability to enrol in loyalty programmes in-app, increase credit limits and receive retailer offers based on geolocation BBVA says the total number of Wallet downloads at the end of Q3 2015 stood at 1.057 million.

Spain had 850,000 downloads, while Mexico (Bancomer) had 164 000, just three months after a July launch. BBVA Wallet passes 1M downloads - Mobile World Live. Spanish banking giant BBVA hailed the passing of one million downloads for its mobile wallet app less than two years after launch, and claimed it could pass five million by the end of 2016. 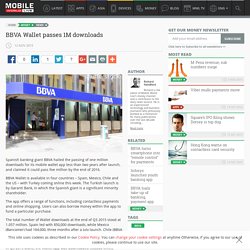 Apple: a mais popular no acesso móvel. Samsung Pay lands in the US. Buoyed by a strong start in Korea, consumer electronics giant Samsung has launched its mobile payments service in the US, with support from the three major card schemes and banking giants Citi, Bank of America and US Bank. Available on Galaxy S6, S6 edge, Note5 and S6 edge+ devices operating on the AT&T, T-Mobile, Sprint and US Cellular networks, Samsung Pay uses digital tokenisation, Samsung Knox, and fingerprint authentication to provide secure payments across both mag-stripe and contactless terminals.

Barclays’ Rollout of HCE Identifies the Unique Challenges U.S. Banks Face. I read with interest a September 16 article in PaymentEye trumpeting the fact that Barclaycard has released an Android mobile wallet well before Android Pay arrives. The interesting bit U.S. banks should pay attention to is the dollar limit that Barclays applied to the implementation of host card emulation (HCE) in order to manage risk: “The credit card provider has confirmed that in November, existing Android customers will be able to take advantage of a new update to Barclaycard’s mobile banking application that will enable their smartphones to make contactless ‘touch and go’ payments.

This feature will allow customers to pay for goods and services in over 300,000 locations nationwide without the use of a debit or credit card. ‘‘Barclaycard has a strong history of innovation and we’re constantly looking for new ways to revolutionise payments,’’ explained Mike Saunders, managing director of digital consumer payments at Barclaycard.

What will you recommend? Barclays to offer mobile payments via Android. While Barclays continues to drag its heels on mobile payments via iPhones, it is set to become the first UK bank to introduce contactless payments from any NFC-enabled Android phone. The activation of the bank's Android app for NFC will take place next month, enabling customers to use their handsets for ‘touch and go’ payments at over 300,000 locations in the UK, as well as across the London transport network. A Year Later but Not Much Better: Google Finally Responds to Apple Pay With Android Pay & New Wallet. Android users will now be able to make contactless payments in the US. Google, in collaboration with the payment networks, finally rolled out Android Pay.

What’s even more? Google redesigned its old Google Wallet app and converted it into an exclusive P2P payment app for sending and receiving money using an email address. Google’s new Wallet is similar to PayPal but there are some distinctive features like the user’s ability to withdraw money from participating ATMs using their Wallet Card. Google is going to roll out more information on this feature soon. As MasterCard became one of the four payment networks to support Android Pay, Ed McLaughlin, Chief Emerging Payments Officer, MasterCard said, “We are thrilled to work with Google to deliver a safe and secure payment experience for our cardholders through Android Pay.

On the other side, the much awaited Android Pay is out today and it will work on all NFC enabled Android devices. Google teases on Android Pay launch plans. Google dropped a hint via Twitter about its plans for Android Pay, following speculation that this week would see its debut. “Looking forward to Android Pay? Stay tuned. #soon,” said a tweet from the official Android account.

The tweet followed speculation that 26 August was to be the launch day for the payment service in the US. The speculation was based on a leaked document from fast food chain McDonald’s. And The Verge spotted an Android Pay logo on a point-of-sale terminal in Subway, another fast food chain, further fuelling speculation. However, the previous thinking had been that Android Pay will appear as part of the forthcoming Marshmallow update to the Android OS, which is expected in October. Google unveils updated payments push - Mobile World Live. Google unveiled Android Pay, stating that the new payment service is “bringing together mobile carriers, payment networks, banks and retailers to deliver you choice and flexibility”. “We believe the same partnership model that fuelled Android’s growth from a single device to seven years ago to now more than a billion users will enable Android Pay to be successful too,” said Dave Burke, VP of engineering for the company. Android Pay and banks.

By Martin Cox, global head of sales, Bell ID. Where are we with Host Card Emulation? Ever since Google announced support for Host Card Emulation (HCE) on Android – banks, tech providers and NFC based mobile payment companies have left no stone un-turned. OT partners Samsung for the launch of Samsung Pay in Europe. Contactless payments to arrive on London's Tube in September. Samsung Preps Launch Of Fingerprint ID Mobile Payment Service. The touch-identification crazy is sweeping across some of the largest technology conglomerates. Most notably, Apple included the new iPhone 5s with Touch ID capabilities, but other corporations like American Express and Zappos have utilized the innovation for their own financial and commerce services. Samsung Paves the Way for Samsung Pay in South Korea. Samsung SDS, the IT service arm of Samsung Group, is poised to launch a new fingerprint mobile payment service in South Korea. The launch will take place with the help of local payment gateway service providers, KG Mobilians and KG Inicis, as reported by ZD Net.

Samsung has also signed an agreement with KICA (Korea Information Certificate Authority), the South Korean government backed certificate licenser. Microsoft Forays into the World of Payments; Gets Its 1st Money Transmitter License. It’s All About Identity Now and MNOs Have a Strategic Enabler Role to Play. Why is Host Card Emulation a Big Opportunity for Technology Providers? Can Mobile Network Operators Regain Relevance In the Mobile Payments Space? 19 Banks/FIs that Adopted HCE Based NFC Payments in the Last Six Months. HCE, or Host Card Emulation, is a cloud-based protocol that promises to simplify mobile contactless payment implementations. Do Android Pay, Google Wallet And Samsung Pay Have What It Takes To Win In Mobile Payments? Last week, there were a couple of major announcements in the world of mobile payments that suggest that the battle for supremacy in the mobile payments world is heating up – and in a pretty big way.

We’ll certainly hear and know lots more as the big players make their speeches and launch new products (and otherwise jockey for position) at Mobile World Congress this week. Announcement number one was that the U.S. carriers finally raised the white flag and closed down Softcard. The rumors of Google buying Softcard’s assets were confirmed officially. Meet Samsung Pay, the Good & the Bad. Faster and easier to navigate with a crisp new look and exciting new features.

Around the World with Beacon. EMV, HCE, BLE will drive adoption of NFC in the USA. A empresa espanhola Yaap lança plataforma m-commerce de tecnologia móvel da Monitise. Weve suffers loss in its first year. 8 Pieces of the Isis Marketing Machine. In the ongoing race for mobile commerce, the first lap winners emerge.