How fintechs can help create the future of banking. Many of the new fintech companies aiming to disrupt the industry are one trick ponies. 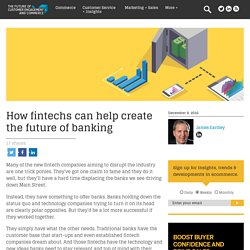 They’ve got one claim to fame and they do it well, but they’ll have a hard time displacing the banks we see driving down Main Street. Instead, they have something to offer banks. Banks holding down the status quo and technology companies trying to turn it on its head are clearly polar opposites. Why you should be banking in the cloud. Banks around the world are flocking to digital tools and new technologies both to meet higher customer expectations and to respond more quickly to their changing environments. 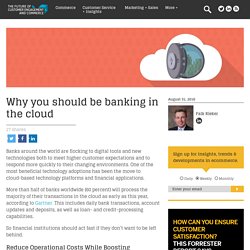 One of the most beneficial technology adoptions has been the move to cloud-based technology platforms and financial applications. More than half of banks worldwide (60 percent) will process the majority of their transactions in the cloud as early as this year, according to Gartner. This includes daily bank transactions, account updates and deposits, as well as loan- and credit-processing capabilities.

So financial institutions should act fast if they don’t want to be left behind. Reduce Operational Costs While Boosting Innovation More than 93 percent of financial service executives believe cloud solutions will transform their organization, according to a recent SAP benchmark survey. The Game of E-Wallets: The Era Of ‘Cold War’ Between West (PayPal, Apple Pay) and East (Alipay, Samsung Pay, Paytm) August 23, 2016 By : Vladislav Solodkiy There will be more than 4.8 billion individuals using a mobile phone by the end of 2016; consequently, e-wallets keep growing at a faster rate. 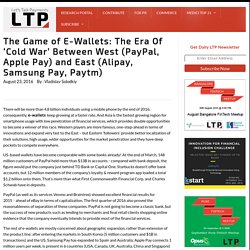 And Asia is the fastest growing region for smartphone usage with low penetration of financial services, which provides double opportunities to become a winner of this race. Western players are more famous, one-step-ahead in terms of innovations and expand very fast to the East – but Eastern ‘followers’ provide better localization of their solutions, high usage, wider opportunities for the market penetration and they have deep pockets to compete everywhere.

US-based wallets have become comparable with some banks already! UBS Report on Whether FinTech Is a Threat or an Opportunity. August 7, 2016 By : LTP Team According to a survey by UBS, customers who are likely to use FinTech services during the next 12 months are more in number when compared to the customers who have already used it. 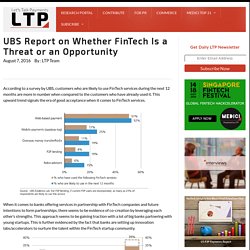 This upward trend signals the era of good acceptance when it comes to FinTech services. When it comes to banks offering services in partnership with FinTech companies and future intentions to form partnerships, there seems to be evidence of co-creation by leveraging each other’s strengths. This approach seems to be gaining traction with a lot of big banks partnering with young startups. Big banks to be chief beneficiaries of fintech craze - Greenwich As... The fintech mirage is losing its shine. Have investors in fintech startup companies been drinking way too much Kool-Aid? 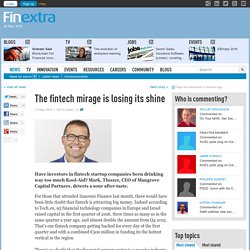 Mark, Tluszcz, CEO of Mangrove Capital Partners, detects a sour after-taste. For those that attended Innovate Finance last month, there would have been little doubt that fintech is attracting big money. Indeed according to Tech.eu, 95 financial technology companies in Europe and Israel raised capital in the first quarter of 2016, three times as many as in the same quarter a year ago, and almost double the amount from Q4 2015.

That's one fintech company getting backed for every day of the first quarter and with a combined €500 million in funding its the hottest vertical in the region. There's no doubt that the financial services sector is a massive industry with inefficiencies and opportunity for greater customer intimacy. Part of the issue is that investors have been funding peripheral businesses - delivering services such as money transfers, factoring or pay day loans. Innovate Finance - The 2015 FinTech Investment Landscape. An International Billion-Dollar FinTech Club. A few years ago, when the word ‘unicorn’ in FinTech wasn’t such an overused term, we would still be referring to the set of companies in this article as FinTech unicorns. 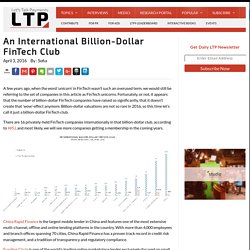 China Rapid Finance is the largest mobile lender in China and features one of the most extensive multi-channel, offline and online lending platforms in the country. 20 FinTech Products From 4 Countries That Millennials Love With 1 Thing in Common. Millennials constitute more than 25% of the US population and are exceeding the baby boomer generation by 3 million. 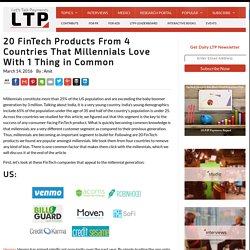 Talking about India, it is a very young country. India’s young demographics include 65% of the population under the age of 35 and half of the country’s population is under 25. Germany’s FinTech Ecosystem: A Wheel in the European Innovation Machine. If we thought 2015 was a great year for FinTech, 2016 is going to surprise us. 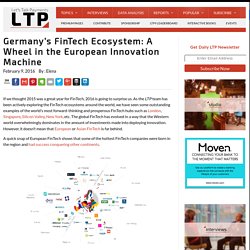 As the LTP team has been actively exploring the FinTech ecosystems around the world, we have seen some outstanding examples of the world’s most forward-thinking and prosperous FinTech hubs such as London, Singapore, Silicon Valley, New York, etc. The global FinTech has evolved in a way that the Western world overwhelmingly dominates in the amount of investments made into deploying innovation. However, it doesn’t mean that European or Asian FinTech is far behind. 2016: A pivotal year for the future of fintech. We asked Bruce Wallace, chief digital officer of Silicon Valley Bank, whether a fintech bubble is brewing. 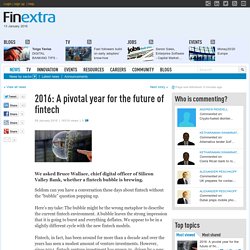 Seldom can you have a conversation these days about fintech without the “bubble” question popping up. Here’s my take: The bubble might be the wrong metaphor to describe the current fintech environment. A bubble leaves the strong impression that it is going to burst and everything deflates. Everything You Wanted to Know About FinTech in Europe. FinTech in Europe has never been more exciting. 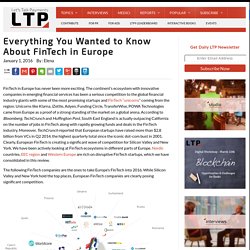 The continent’s ecosystem with innovative companies in emerging financial services has been a serious competition to the global financial industry giants with some of the most promising startups and FinTech “unicorns” coming from the region. Unicorns like Klarna, iZettle, Adyen, Funding Circle, TransferWise, POWA Technologies came from Europe as a proof of a strong standing of the market on a global arena. According to Bloomberg, TechCrunch and Huffington Post, South East England is actually outpacing California on the number of jobs in FinTech along with rapidly growing funds and deals in the FinTech industry. Moreover, TechCrunch reported that European startups have raised more than $2.8 billion from VCs in Q2 2014, the highest quarterly total since the iconic dot-com bust in 2001.

Clearly, European FinTech is creating a significant wave of competition for Silicon Valley and New York. The Secret of The FinTech Unicorns. As the density of FinTech unicorns club grows over years with amazingly innovative solutions being democratized, there is a legitimate question raising – who is next? Or maybe what is next? It should not be a question, as there is a path that takes Fintech startups through the rapid growth to become unicorns one day (aside from truly disruptive solution or idea). Recognized leaders in FinTech across sectors share same hubs, first investors, adopters and approach. Wakeup FinTech Startups: Banks Are Becoming FinTech Addicts Too. Have you ever tried to compare a bank with Macy’s or a shopping mall and a FinTech startup with a Zara outlet? You may wonder what this comparison is about.

Even though FinTech startups are emerging rapidly, trying to disrupt the industry and serving niche audiences, banks have been a one stop market like Macy’s for common people. Even if FinTech peer-to-peer lending startups like SoFi specialize in offering student loans, banks also offer student loans, personal loans, mortgage loans and every other loans one can think of.

Even as FinTech P2P payments apps like Venmo offer instant money transfer, banks are moving towards similar services enabled by PopMoney, ClearXchange and other P2P solutions. In fact, big banks in America have already incorporated P2P payments within their mobile apps. Consolidation Is Happening in FinTech, Interesting M&As. Are Investors Still Interested in Bitcoin? An Investment Analysis. Let’s Talk Payments has been bullish on the use of blockchain for non-payments purpose. Blockchain technology is exciting and has the potential to change the world. It’s possible because it’s secure—it has the capacity to process large amounts of transactions. Industry veterans feel that blockchain technology has enough potential to move beyond bitcoin. On the other hand, bitcoin faces fluctuations and also has multiple security issues. Stripe May Swipe Up $500M. Stripe, the API payments company, is raising fresh cash, TechCrunch reported Wednesday (May 20), citing sources close to the deal.

The exact amount isn’t known, but sources reportedly told the site the final number could be “big” and that one of the biggest backers in the new round could be DST Global. The financing could top $500 million, the unnamed source allegedly told TechCrunch, though a spokesperson refused to comment on the rumors. Stripe has been successful garnering large amounts of cash in past years; the company thus far has taken in nearly $200 million from marquee names such as Elon Musk, Sequoia Capital and Peter Thiel. Any new funds would be likely go toward growth and geographic expansion beyond its current 20-country roster, as Stripe just unveiled a beta program in Japan. More Than $1.16 billion Raised by Payments Companies in 2015. Disrupters bring destruction and opportunity. “Ubernomics” And The New Start Up Math. By all accounts, 2014 was the year of the “on-demand” economy. Ride-sharing service Uber recently closed out a $1.2 billion funding round, placing the start-up’s total valuation at $41 billion.

Investment Tracker, January 1-6. The Future of Bitcoin Is Not Bitcoin. 11 Insights from 2 Years of Fintech Investments. 10 Biggest Acquisitions in Payments Industry in 2014.