Spain's Ecommerce Sales Leap as Economy Rebounds. Ingenico ePayments and YouPass Work Together Exclusively to Provide Gamers New Payment Options. April 3, 2016 By : LTP Team Ingenico ePayments, an Ingenico Group company announced a few days back that it entered into an exclusive partnership with the digital card company, YouPass, to provide gamers with new payment options that meet their growing demands. 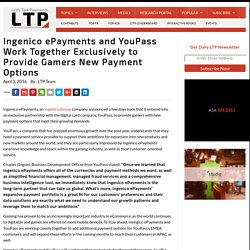 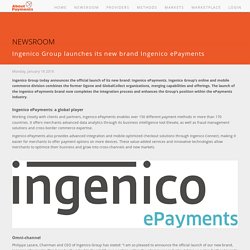 Ingenico Group’s online and mobile commerce division combines the former Ogone and GlobalCollect organizations, merging capabilities and offerings. The launch of the Ingenico ePayments brand now completes the integration process and enhances the Group’s position within the ePayments industry. Ingenico ePayments: a global player. European cross-channel retail forecast, 2015 to 2020. European cross-channel retail forecast, 2015 to 2020 Friday 7 August 2015 Research by Forrester has shown that digital touch points will influence over half of all European Retail Sales by 2020. 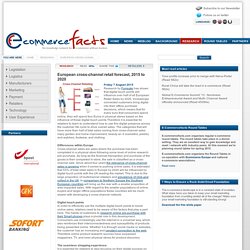 Increasingly connected customers bring digital into their offline purchase decisions, which means that for every euro that consumers spend online, they will spend four Euros in physical stores based on the influence of those digital touch points Therefore it is essential for retailers to learn to understand how to use this digital presence across the customer life cycle to drive overall sales. The categories that will have more than half of total sales coming from cross-channel sales imply garden and home improvement, beauty an d cosmetics, jewelry and watches, footwear, and clothing Differences within Europe. 63 Insanely Useful APIs Across 12 Segments to Supercharge Your Product. We at LTP have closely watched and observed the FinTech section. 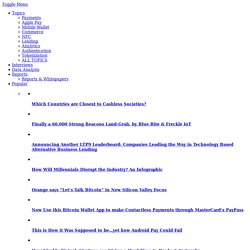 We have covered many developments in the FinTech space, and one of them is APIs. European cross-channel retail forecast, 2015 to 2020. Innovation And The Digital Shopper. August 2015 | PYMNTS.com Understanding the consumer’s digital path to purchase is the million-dollar question every retailer wants the answer to. 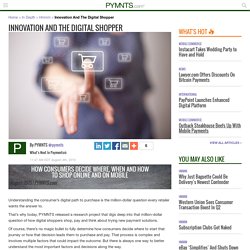 That’s why today, PYMNTS released a research project that digs deep into that million-dollar question of how digital shoppers shop, pay and think about trying new payment solutions. Of course, there’s no magic bullet to fully determine how consumers decide where to start that journey or how that decision leads them to purchase and pay. That process is complex and involves multiple factors that could impact the outcome. Why Visa Chose Stripe. The news that Visa is aligning with Stripe – both as an investor and as a strategic partner – is the kind of news that can shake up the payments industry. 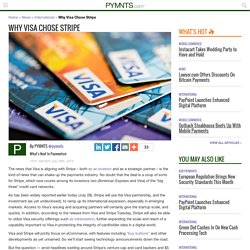 No doubt that the deal is a coup of sorts for Stripe, which now counts among its investors two (American Express and Visa) of the “big three” credit card networks. As has been widely reported earlier today (July 28), Stripe will use the Visa partnership, and the investment (as yet undisclosed), to ramp up its international expansion, especially in emerging markets. Access to Visa’s issuing and acquiring partners will certainly give the startup scale, and quickly. CANAL INTERNET PESA CADA VEZ MAIS NAS VENDAS DA FNAC. Stripe Now Valued at $5 Billion With Financial Giant Visa as New Investor. Stripe, a California-based online payments company, has raised new investments which have raised the company valuation to $5 billion from $3.57 billion in December 2014. 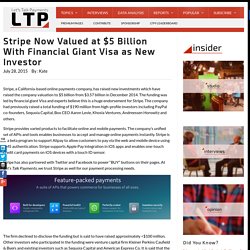 The funding was led by financial giant Visa and experts believe this is a huge endorsement for Stripe. The company had previously raised a total funding of $190 million from high-profile investors including PayPal co-founders, Sequoia Capital, Box CEO Aaron Levie, Khosla Ventures, Andreessen Horowitz and others. Stripe provides varied products to facilitate online and mobile payments. 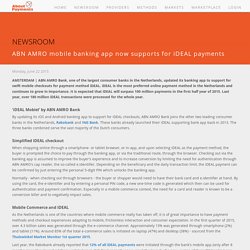 It is expected that iDEAL will surpass 100 million payments in the first half year of 2015. Last year, over 180 million iDEAL transactions were processed for the whole year. 'iDEAL Mobiel' by ABN AMRO Bank By updating its iOS and Android banking app to support for iDEAL checkouts, ABN AMRO Bank joins the other two leading consumer banks in the Netherlands, Rabobank and ING Bank. These banks already launched their iDEAL supporting bank app back in 2013. Best Credit Card Processing Solutions for Business in 2015. Credit: dean bertoncelj / Shutterstock Accepting credit cards is a must for small businesses. 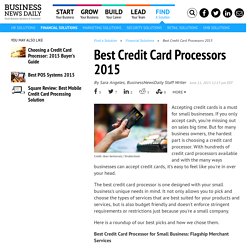 If you only accept cash, you're missing out on sales big time. But for many business owners, the hardest part is choosing a credit card processor. With hundreds of credit card processors available and with the many ways businesses can accept credit cards, it's easy to feel like you're in over your head. The best credit card processor is one designed with your small business's unique needs in mind. Best Credit Card Processing Solutions for Business in 2015. What If Ads Came With Buy Buttons? One of the wonderful things about taking a closer look at retail is the discovery of an inventory of accepted facts that seem to have been invented out of whole cloth and voted into reality by a republic of journalists quoting each other.

Take for instance, the one about women controlling 80 percent of the commerce spend in the United States. Or the one from the world of advertising where it seems a large number of otherwise credible judges have decided that the average American consumer encounters 3,000-5,000 ads a day. The figure seems to be generally sourced back to a study marketing research firm Yankelovich Partners released in 2004 on the topic of advertising clutter. Although the study itself made no reference to any specific figure on average ads viewed per day per consumer, that somehow turned into quotes in publications such as Inc. and USAToday attributing the 3,000 to 5,000 a day figure for ad exposure to Yankelovich. And, he notes, Facebook is one example. WePay Raises $40 Million to Accelerate its Geographic Expansion.

WePay, one of the leading providers of payments as a service for online platforms and marketplaces, has raised $40 million in Series D funding. This latest round will help the company expand its services globally. WePay powers payments for thousands of online platforms, including Care.com, Constant Contact, FreshBooks, GoFundMe and Meetup. MyBank: over 100 million euro of payments since beginning of the year. PARIS | The owner of MyBank - PRETA S.A.S. - announced the growing take-up of MyBank by consumers and businesses. In late April 2015, MyBank surpassed the mark of 100 million euro in transaction value. Back in October MyBank generated a total processing value of 1 million euro during the whole month, in February MyBank already generated 1 million euros worth of transactions per day. MyBank key facts and figures In terms of payment volumes, the pan-European e-authorisation solution has been witnessing monthly growth rates of 30 percent since 2014.

Shopify Includes Apple Pay to Sell on Mobile Phones. Shopify, which makes software to help retailers sell online, has gone a step further by introducing its Mobile Buy SDK and adding Apple Pay to facilitate selling through mobile apps. Shopify’s Mobile Buy SDK connects the seller’s app directly with Shopify eliminating the need to set up payment gateways and build an order management backend. With few lines of code, sellers can add a native button or embed a responsive online store into their mobile app and start selling. Once it is connected, all the order details, customer details and payments existing in their mobile app will appear on Shopify. As per the website, Mobile Buy SDK gives sellers access to a broad set of ecommerce APIs provided by Shopify which includes product lists, cart management and checkout.

This lets sellers build a more native ecommerce experience into their shopping app. The addition of Apple Pay provides a secure checkout and a one-touch payment option for the buyers. Makers Of Oreo Eye “Buy Now” Shopable Ads. Mondelez International, global snacking powerhouse of $34 billion (2014), has a very active presence on social media and now wants this presence to generate serious revenues. Mondelez is looking into launching its very own “Buy Button” and shopable ads which would be linked to one of its 130 and more retailers, according to L2. With Twitter and Facebook having rolled out their “Buy Buttons” along side status updates in 2014, the door is open for experiments by big and smaller brands. Walmart Primed To Challenge Amazon Prime. Paying It Onward Through Global Gateways. Offering white-label solutions to payment service providers and acquirers is nothing new. Um quinto do consumo de Internet é mobile. Alibaba’s B2B Plan Could Change The World Of Cross-Border Commerce.