CyberSource Adds Real-Time Fraud Analytics Tool. New analysis shows that the commercial card market is on the up thanks to rising p-card and T&E spend. 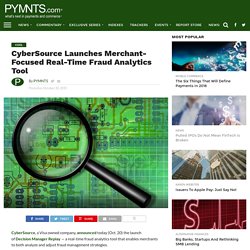 The latest news from WEX and MasterCard, among others, suggests that analysis is correct, and signals a strong market for fleet cards and the virtualization of commercial cards. But there’s one type of corporate card product that is having a terrible time: the payroll card. You can thank RushCard for that. PYMNTS breaks down what’s going on in the commercial, fleet, T&E and payroll card worlds below.

A Stronger Market The market is looking up for commercial cards, according to the latest analysis from Mercator Advisory Group. Visa Bridges The EMV-Biometrics Gap. It can be easy to only see biometrics as a futuristic technology that is best suited for gaining access to something – like your mobile device. 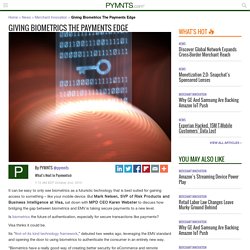 But Mark Nelsen, SVP of Risk Products and Business Intelligence at Visa, sat down with MPD CEO Karen Webster to discuss how bridging the gap between biometrics and EMV is taking secure payments to a new level. Is biometrics the future of authentication, especially for secure transactions like payments? Most consumers are open to alternate authentication methods. According to a recent research published by Accenture, there is a potential demand for biometric authentication solutions as consumers look to replace the traditional password and PIN systems with other authentication methods. 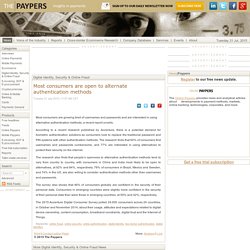 Will mobile biometric authentication replace today’s passwords? We use passwords constantly to log into dozens of systems and services every single day. 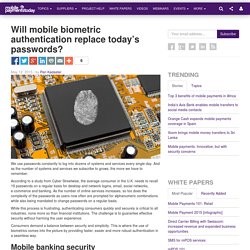 And as the number of systems and services we subscribe to grows, the more we have to remember. According to a study from Cyber Streetwise, the average consumer in the U.K. needs to recall 19 passwords on a regular basis for desktop and network logins, email, social networks, e-commerce and banking. As the number of online services increases, so too does the complexity of the passwords as users now often are prompted for alphanumeric combinations while also being mandated to change passwords on a regular basis.

While this process is frustrating, authenticating consumers quickly and securely is critical to all industries, none more so than financial institutions. The challenge is to guarantee effective security without harming the user experience. Consumers demand a balance between security and simplicity. Mobile banking security. Data Breaches in the U.S. Blog: Go Two-Factor or go Home. Logins that require only a password are not secure. 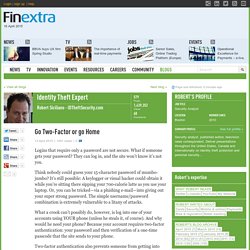 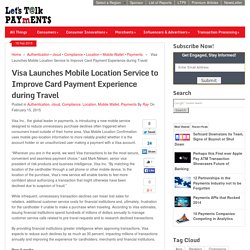 Be the first to be notified when the new LTP is launched. Subscribe now! Visa Inc., the global leader in payments, is introducing a new mobile service designed to reduce unnecessary purchase declines often triggered when consumers travel outside of their home area. Visa Mobile Location Confirmation uses mobile geo-location information to more reliably predict whether it is the account holder or an unauthorized user making a payment with a Visa account. World's Biggest Data Breaches & Hacks. Evolution of Card Fraud in Europe 2013. Data Breaches in the U.S. Evolution of Card Fraud in Europe 2013. Fraud Losses Grow as Issuers Focus on Customer Experience In 2013, the UK had fraud losses similar to 2009, when levels seemed low after the introduction of ‘tough on fraud’ policies following the peak in losses in 2008. 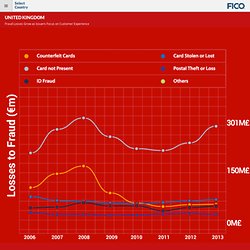 Fraud losses have grown steadily in 2012 and 2013, at 14% and 16%, respectively. Fraud has increased since 2011 by £110 million, with £80 million in CNP fraud and £9 million in Lost & Stolen. Top bankers need to take cyber threat seriously - BoE. By Matt Scuffham and William Schomberg LONDON Mon Dec 22, 2014 12:43pm GMT LONDON (Reuters) - Top British bankers and other senior executives in the financial services industry are not taking the risk of cyber attacks seriously enough, financial policymakers at the Bank of England say. 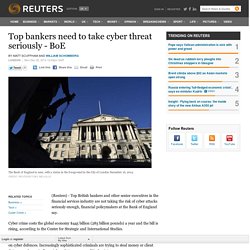 Cyber crime costs the global economy $445 billion (285 billion pounds) a year and the bill is rising, according to the Center for Strategic and International Studies. Banks are particularly vulnerable, despite spending hundreds of millions of dollars a year on cyber defences. Increasingly sophisticated criminals are trying to steal money or client data, cause havoc in financial markets or score political points. Cyber criminals obtained details of 83 million clients from JPMorgan Chase this year while Sony Pictures was hacked in an attack the United States has blamed on North Korea. Other major banks and key financial institutions should also take the test as soon as possible, the FPC minutes said. Mobile Payments Security Depends on a Complicated Chain. Following the disclosure by a name brand retailer that their point-of-sale (POS) system had been breached, shoppers outside one of the retailer’s brick and mortar locations unanimously told a television reporter that cash was the safest way to pay in-person. 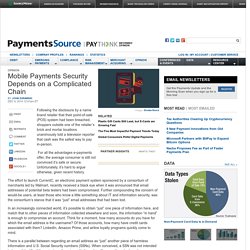 For all the advantages e-payments offer, the average consumer is still not convinced it’s safe or secure. Unfortunately, it’s hard to argue otherwise, given recent history. The effort to launch CurrentC, an electronic payment system sponsored by a consortium of merchants led by Walmart, recently received a black eye when it was announced that email addresses of potential beta testers had been compromised. MasterCard and Visa to create new security standard to replace passwords for online payments. By Sarah Clark • nfcworld.com • Published 13 November 2014, 14:20 • Last updated 13 November 2014, 14:20 MasterCard is working with Visa to create a new authentication standard for online payments that will gradually replace the 3D Secure protocol with “invisible authentication”, far fewer prompts for passwords and support for a range of biometric technologies. 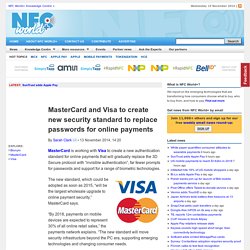 The new standard, which could be adopted as soon as 2015, “will be the largest wholesale upgrade to online payment security,” MasterCard says. “By 2018, payments on mobile devices are expected to represent 30% of all online retail sales,” the payments network explains. “The new standard will move security infrastructure beyond the PC era, supporting emerging technologies and changing consumer needs. Announcing the First LTP9 Leaderboards: Companies Leading the Way in Fraud and Authentication.