How Will We be Paying in 2020? - Techbitzz. Anything is possible, I often hear people saying. 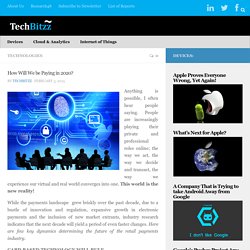 People are increasingly playing their private and professional roles online; the way we act, the way we decide and transact, the way we experience our virtual and real world converges into one. This world is the new reality! While the payments landscape grew briskly over the past decade, due to a bustle of innovation and regulation, expansive growth in electronic payments and the inclusion of new market entrants, industry research indicates that the next decade will yield a period of even faster changes. Here are few key dynamics determining the future of the retail payments industry. Mobile gadgets have powered new opportunities for retail payments. Add to that the implications of wearable technology.

There’s the pending arrival of Apple Watch, in 2015, to consider as well. Payments Industry Pairings and Partings In 2015. Here we are – 19 days into a new year and midway in the month known apparently as “divorce month.” 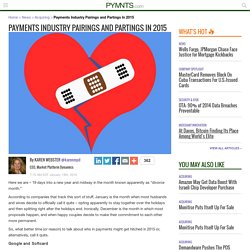 According to companies that track this sort of stuff, January is the month when most husbands and wives decide to officially call it quits – opting apparently to stay together over the holidays and then splitting right after the holidays end. Ironically, December is the month in which most proposals happen, and when happy couples decide to make their commitment to each other more permanent. So, what better time (or reason) to talk about who in payments might get hitched in 2015 or, alternatively, call it quits. Google and Softcard News broke late Friday (Jan. 16) that Google is negotiating to buy Softcard for a jaw-dropping $50 million.

Google/Softcard is a curious marriage, and one has to wonder if it might even be of the shotgun variety. Then again, I suppose that Softcard does have some assets that are worth leveraging by Google. Google and LevelUp PayPal and Amex. Payments in 10 years: Very different. Jan. 9, 2015 By Andy Brown, Product Marketing Manager, Alaric Systems Ltd. 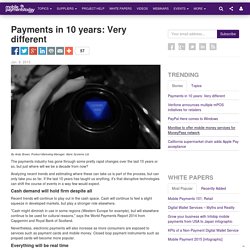 The payments industry has gone through some pretty rapid changes over the last 10 years or so, but just where will we be a decade from now? Analyzing recent trends and estimating where these can take us is part of the process, but can only take you so far. If the last 10 years has taught us anything, it's that disruptive technologies can shift the course of events in a way few would expect. Cash demand will hold firm despite all Recent trends will continue to play out in the cash space. "Cash might diminish in use in some regions (Western Europe for example), but will elsewhere continue to be used for cultural reasons," says the World Payments Report 2014 from Capgemini and Royal Bank of Scotland. Nevertheless, electronic payments will also increase as more consumers are exposed to services such as payment cards and mobile money. Everything will be real time Cryptocurrencies will stick around — in some form.

Deloitte: Mobile payment volumes to increase 1000% in 2015. By Rian Boden • nfcworld.com • Published 14 January 2015, 14:21 • Last updated 14 January 2015, 14:21 In-store mobile payments will increase by more than 1,000% worldwide this year with 5% of the world’s smartphones being used to make a payment in a store at least once a month, up from under 0.5% in mid-2014, according to the new edition of Deloitte’s annual Technology, Media & Telecommunications (TMT) Predictions report. 2015 will be the “first year in which the multiple prerequisites for mainstream adoption — satisfying financial institutions, merchants, consumers and device vendors — have been sufficiently addressed”, the authors conclude. 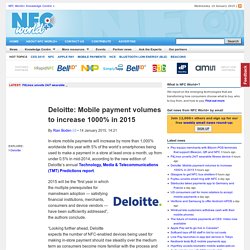 “Looking further ahead, Deloitte expects the number of NFC-enabled devices being used for making in-store payment should rise steadily over the medium term as consumers become more familiar with the process and more banks and merchants in more markets accept this form of transaction,” the report adds. Infographic: Key trends for 2015.

What Should We Expect from 5 Payments Leaders in 2015? This is the season of giving and gifting. 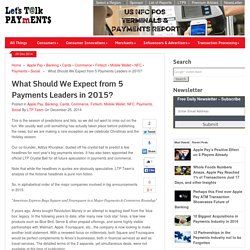 Happy Holidays! We will give you a set of 3 whitepapers, with our compliments. Gift yourselves some great content by subscribing to our free daily newsletter. Now, that's a sweet deal! This is the season of predictions and lists, so we did not want to miss out on the fun. Our co-founder, Aditya Khurjekar, dusted off his crystal ball to predict a few headlines for next year’s big payments stories.

Note that while the headlines in quotes are obviously speculative, LTP Team’s analysis of the fictional headlines is pure non-fiction. So, in alphabetical order of the major companies involved in big announcements in 2015: “American Express Buys Square and Foursquare in a Major Payments & Commerce Roundup” 5 years ago, Amex bought Revolution Money in an attempt to leapfrog itself from the ‘blue box’ legacy.

“Apple Opens NFC Stack to Google Wallet amid Speculation of New Apple Pay Network” The Ten Things That Changed Payments In 2014. Ah, yes, it’s the most magical time of the year. 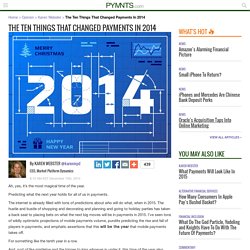 Predicting what the next year holds for all of us in payments. The internet is already filled with tons of predictions about who will do what, when in 2015. The hustle and bustle of shopping and decorating and planning and going to holiday parties has taken a back seat to placing bets on what the next big moves will be in payments in 2015.