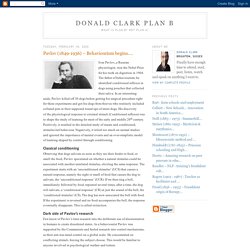 The father of behaviourism, he identified conditioned reflexes in dogs using pouches that collected their saliva. In an interesting aside, Pavlov killed off 30 dogs before getting his surgical procedure right for these experiments and got his dogs from thieves who routinely included collared pets in their supposed round ups of street dogs. His discovery of the physiological response to external stimuli (Conditioned reflexes) was to shape the study of learning for most of the early and middle 20th century. Positively, it resulted in the detailed study of innate and conditioned, stimulus-led behaviour. Maslow’s Hierarchy of Needs and Blackfoot Nation Beliefs. I have referred to Maslow’s Hierarchy of Needs for as long as I can remember. 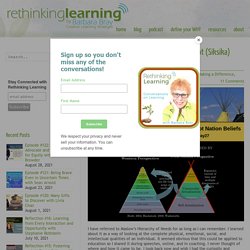 I learned about it as a way of looking at the complete physical, emotional, social, and intellectual qualities of an individual. It seemed obvious that this could be applied to education so I shared it during speeches, online, and in coaching. I never thought of where and how it came to be. 5R Adult Learning Assignment 5: Learning – The Neuroscience and the Neuromyths – Reflective Teaching Evolution. Synopsis/Reflection – What does it mean to learn? 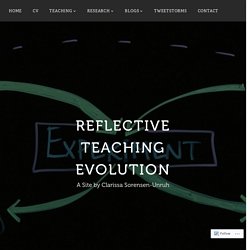 (from a neuroscience perspective, that is) Learning, at its most fundamental, is a process that changes the brain. On extreme instructivism and the social construction of evidence. I was struck by Lorraine Hammond’s recent piece for The Conversation, favourably comparing explicit instruction with inquiry learning. 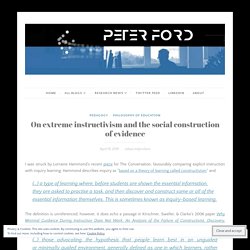 Hammond describes inquiry as “based on a theory of learning called constructivism” and: (…) a type of learning where, before students are shown the essential information, they are asked to practise a task, and then discover and construct some or all of the essential information themselves. This is sometimes known as inquiry-based learning. Margin of error in data-driven decisions – actualham. Paul Kirschner is a professor at the Open University of the Netherlands and a leading educational psychologist. 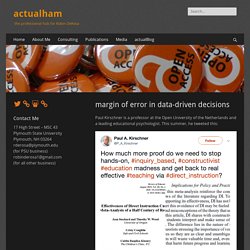 This summer, he tweeted this: In an interview about the tweet, he continued: The only thing I accept as ‘true’ is what is supported by high-quality research. A longer piece on the taxonomy of Bloom. Benjamin Bloom developed a taxonomy for goals in education, and frankly: One of the most asked questions I received is ‘is Bloom correct’. 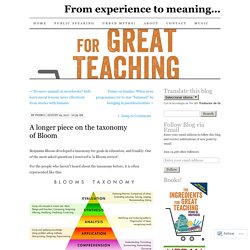 For the people who haven’t heard about the taxonomy before, it is often represented like this: But did you notice, I didn’t write: this is the taxonomy, I wrote it’s often represented. During Spring a lot of edubloggers wrote about this by the likes of David Didau and Doug Lemov and on Twitter Dylan William proposed this correction: But now it’s getting really interesting as Lorin W. A critical comparison of transformation and deep approach theories of learning: International Journal of Lifelong Education: Vol 34, No 3. My takeaways from Stephen Downes’ talk on personal learning. In general, I have great intentions to watch recorded presentations. 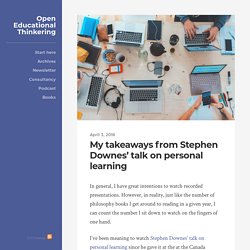 However, in reality, just like the number of philosophy books I get around to reading in a given year, I can count the number I sit down to watch on the fingers of one hand. I’ve been meaning to watch Stephen Downes’ talk on personal learning since he gave it at the at the Canada MoodleMoot back in February. Since I’m talking with him this afternoon about Project MoodleNet, that served as a prompt to get around to watching it. 5 Myths and misconceptions in learning theory. There are a number of common myths surrounding learning theory that arise time and time again. 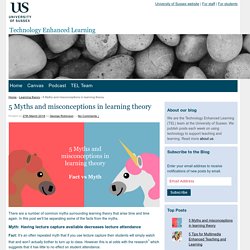 In this post we’ll be separating some of the facts from the myths. Myth: Having lecture capture available decreases lecture attendance Fact: It’s an often repeated myth that if you use lecture capture then students will simply watch that and won’t actually bother to turn up to class. However this is at odds with the research1 which suggests that it has little to no effect on student attendance. Everyone’s favourite psychology theory isn’t all it’s cracked up to be. Dave Thompson/PA Wire/PA Images For decades, psychologists and educators have believed that a growth mindset can have a significant influence on the way a child performs academically. 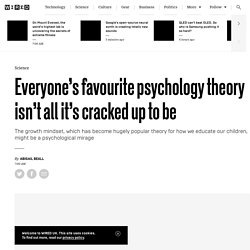 From the ethos of a primary school in Camden to a Nasa study in 'engineering behaviour', it has taken hold across the world, and across generations. But this dominant dogma, it turns out, may have been wildly overblown. As the popular theory goes the way you handle failure can generally put you into one of two categories. Teaching : A Political Tool for Repression or Freedom. As I write this first column for the new Education section of The Huffington Post, I reflect on the reasons I became a teacher. 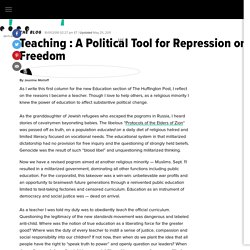 Though I love to help others, as a religious minority I knew the power of education to affect substantive political change. As the granddaughter of Jewish refugees who escaped the pogroms in Russia, I heard stories of cavalrymen bayoneting babies. The libelous “Protocols of the Elders of Zion“ was passed off as truth, on a population educated on a daily diet of religious hatred and limited literacy focused on vocational needs. The educational system in that militarized dictatorship had no provision for free inquiry and the questioning of strongly held beliefs. Networked Communities of Practice Research Project – Exploring Higher Education Staff and Student Affairs Professionals Digital, Networked Practices. Pédagogies alternatives : trois documentaires pour y voir clair. Photo : JJ Thompson Les pédagogies alternatives sont sur le devant de la scène médiatique depuis la publication de l’ouvrage de Céline Alvarez.

Si ce dernier est au coeur de nombreux débats, plusieurs films documentaires réalisés ces derniers mois proposent des immersions intéressantes dans ce qui se passe dans plusieurs classes de France. Découverte. Une idée folle. Mick Healey. “Mick is like a human rolodex for active pedagogies. He is an amazing source of the world’s great ideas on learning and teaching in higher education.” Randy Bass, Georgetown University, Washington DC. Contemporary educational ideas all my staff should know about. Key ideas from different sources. As I look ahead to starting my new job at Highbury Grove, I’m thinking about all the conversations we are going to have about learning. To a large degree I want my teachers to be as up-to-date as possible within their own subject domains. They should know the latest OfSTED position ( eg with Moving English Forward or Mathematics: made to measure ) and be up to speed with exam specifications and assessment requirements.

Critical Pedagogy: Intentions and Realities - Hybrid Pedagogy. Paragogy and Heutagogy. Advancing the Theory and Practice of Self-Determined Learning. All Things Heutagogy. Alfred North Whitehead (1861–1947) - The Nature of Education, Educational Development and the Rhythm of Growth, Universities and Professional Training. One of the twentieth century's most original metaphysicians and a major figure in mathematical logic, Alfred North Whitehead was also an important social and educational philosopher. Born in England, he was educated at Trinity College, Cambridge, where he also taught mathematics from 1884 until 1910.

He then moved to London, where he was professor of applied mathematics at the University of London until 1924. Receiving an invitation to join the philosophy department at Harvard University, Whitehead came to the United States and taught at Harvard until 1937. He remained in Cambridge, Massachusetts, for the rest of his life. What is Connected Learning. Ninth-grader Charles Raben has seen first-hand that by connecting the many spheres of his life -- peers, interests and academic pursuits -- new learning experiences can and will present themselves in both organized and unstructured ways. In the summer of 2012, Charles utilized his photography skills and the petition website Change.org to capture and share the story of Jerry Delakas, a longtime local newsstand operator who was in danger of losing his New York City license over a technicality. "I wanted to have that experience of creating change myself.

" The petition-making process proved to be a life-changing learning experience for the teen. The PAH Continuum: Pedagogy, Andragogy & Heutagogy. Guest post by Fred Garnett Fred Garnett In my teaching practice, mostly with socially-excluded kids attempting to get some qualifications in college, I developed a number of techniques for showing them how to be successful on their own terms.

College is classically a context in which an andragogic approach works best, where you negotiate with your students to find an agreed learning path. In the department where I worked, at Lewisham College in London, we had developed a universal entry test, followed by an interview, which everyone took. We had found this process to be a better predictor of success that their school results, which usually just measured their dissatisfaction with an education system, which was designed to fail them.

However, over time, I developed a technique that I now call brokering that was much more about negotiating with the learner in the learning context of the subject that they had chosen. That, in effect, is what we now called the PAH Continuum. Teaching and Learning in the Rhizome: challenges and possibilities. June 22, 2015 by jennymackness.

From Andragogy to Heutagogy. Author: Stewart Hase and Chris Kenyon (2001) Southern Cross University Keywords: Southern Cross University, pedagogy, andragogy, heutagogy, higher education, vocational education, self-determined learning. Using Education to Serve the Individual: A Conversation with Steve Hargadon (Part 2 of 2) We’re not recognizing that there’s something profoundly important in the dialogue around the philosophy of education, rather than the structured reform of it. — Steve Hargadon.

Key Pedagogic Thinkers - Dave Cormier. Introduction/Background. ‘To create is to hurt a little’ – a Dutch perspective on creative learning. Learning, Technology and Community: A Journey of the Self. Look at how ALT defines itself on its website. It's an identity that's very much at the boundary of different things: technology, but also change management, learning theory, etc. Vygotsky on Collective Creativity. Posted by keithsawyer in Everyday life. Tags: Collective creativity, creativity, lev vygotsky, vygotsky, walter isaacson trackback I just re-read a classic article about creativity, written almost 100 years ago by the legendary Russian psychologist Lev Vygotsky.

The meaning of pedagogy. Disrupting Ourselves: The Problem of Learning in Higher Education. Learning theories and online learning. The Progressive-Traditional Pedagogy Tree. This post is based on my talk for #PedagooLondon14 at the IoE. Having offered to run a workshop ages ago, when finally pressed for a title by the wonderful, patient organiser Helene Galdinoshea, I’d just been reading another rather tedious, acrimonious tit-for-tat twitter exchange.

Progressives vs Traditionalists acting out The North vs The South or Roundheads vs Cavaliers. From Andragogy to Heutagogy. Constructivism (philosophy of education. Learning Theories, Learning Models, Learning Theory Summaries - in Plain English! Heutagogy, Self-Directed Learning and Complex Work. Advancing the Theory and Practice of Self-Determined Learning. Heutagogy and lifelong learning: A review of heutagogical practice and self-determined learning. International Journal of Learning and Media - Full Text. Learning Theory v5 - What are the established learning theories? Towards a Working Theory of Learning: The Affective Context Model. Rhizomatic Education : Community as Curriculum. 9 reasons why I am NOT a Social Constructivist. Learning Transfer as Preparedness. Maslow's hierarchy of needs.

Theories for the digital age: Connectivism. The Difference Between Instructivism, Constructivism, And Connectivism. Connectivism must abandon its ideas? Bill Gates: ‘It would be great if our education stuff worked but…’ Français. A Simple Guide To 4 Complex Learning Theories. Hayo Reinders. Communities of practice. The False Dichotomy Between Facts And Creativity. Eight Ways of Looking at Intelligence. A Great Wheel of All The Learning Theories Teachers Need to Know about. To encourage creativity, Mr Gove, you must first understand what it is. Why it's caveat emptor when it comes to some educational research - Article. Teachers need to drive the research agenda. Preparing to Teach in the Lifelong Learning Sector.

Critical Review of Connectivism: A Learning Theory for the Digital Age. Student-Centered versus Student-Led Education. A leak of insight: the ‘task’ of language learning. Formal versus informal language learning. Teaching and Learning Publications. Connectivism as Epistemology. Why Connectivism is not a Learning Theory « A Point of Contact. Models of Learners. Some 20x20 thinking about the metaphor of the “rhizome” in learning. Blog marathon: 50 blogs on learning theorists over next 50 days. Educational Thinkers.