30 références pour démystifier 10 idées reçues sur le numérique #pdlt. France decides 'textopornographie' is French for 'sexting' The French have shut down yet another English word: "sexting" will now be known as "textopornographie," with "sexto" as the noun "sex text.

" France's General Commission on Terminology and Word Invention (or Commission Générale de Terminologie et de Néologisme, s'il vous plaît) decided to change the word, as it has done since 1635 in an effort to protect the country's language from all words ugly and devoid of Frenchness. Twitter. Amclind: #Kites2013 at Kimmo Rossi... Get with the program - News. Last Updated:4 October, 2013Section:News The arguments for and against teaching coding in schools increasingly resemble those for and against teaching Latin. 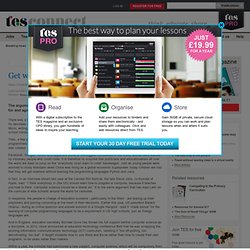 But the subject is here to stay, Richard Vaughan writes There was a time, not so long ago, when computer programming was the preserve of the socially awkward. Its devotees shunned mainstream hobbies in favour of sitting in darkened rooms, hunched over a BBC Micro, writing code. The stereotype of nerdy young men (and they generally were men) hanging out in the school computer lab punching away at a keyboard may have been crude, but it was accurate. Then, a few years ago, everything changed. Facebook, Google, Twitter and Apple are some of the biggest companies in the world, and all were started by visionary people who could code. The future of global English - coping with culture.

How SMS is becoming a digital-lingual cultural expression. A review of Dr Rotimi Taiwo’s book, Language and Mobile Telecommunication in Nigeria: SMS as a Digital Lingual-Cultural Expression by Chijioke Uwasomba. 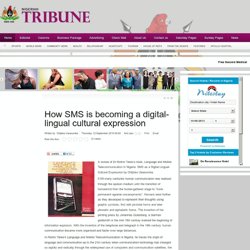 FOR many centuries human communication was realised through the spoken medium until the transition of humankind from the hunter-gatherer stage to “more permanent agrarian encampments”. Humans went further as they developed to represent their thoughts using graphic symbols, first with pictorial forms and later phonetic and alphabetic forms. The invention of the printing press by Johannes Gutenberg, a German goldsmith in the mid 15th century marked the beginning of information explosion. With the invention of the telephone and telegraph in the 19th century, human communication became more organised and faster over large distances.

A Language Evolves. Danny Erker, in East Boston’s Maverick Square, has been visiting the city’s neighborhoods to recruit subjects for his linguistics research. 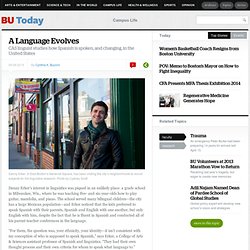 Photo by Cydney Scott Danny Erker’s interest in linguistics was piqued in an unlikely place: a grade school in Milwaukee, Wis., where he was teaching five- and six-year-olds how to play guitar, mandolin, and piano. Computational Linguistics: What Our Word Choice Reveals About Us. By Maria Popova What the pronouns you use reveal about your thoughts and emotions, or how to liespot your everyday email. 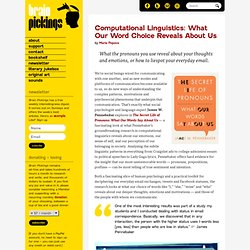 We’re social beings wired for communicating with one another, and as new modes and platforms of communication become available to us, so do new ways of understanding the complex patterns, motivations and psychosocial phenomena that underpin that communication. Key Findings: Languages in audiovisual media and press. Language Rich Europe research provides a rich source of cross-national insights into multilingualism and that goes beyond the education sector. 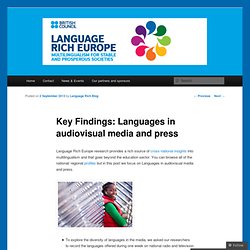 You can browse all of the national/ regional profiles but in this post we focus on Languages in audiovisual media and press. To explore the diversity of languages in the media, we asked our researchers to record the languages offered during one week on national radio and television according to the bestselling newspapers in the cities surveyed. Most participating countries/regions offer some radio and television broadcasting in languages other than the national language. Catalonia provides television broadcasting in a rich variety of foreign, R/M, and immigrant languages. Like this: Production Orale: Pratiques, expériences et projets. II.1 Historique de la production orale en classe de langue L’oral a été introduit vers 1910 avec la méthode directe qui consistait à imiter l’apprentissage de la langue maternelle. 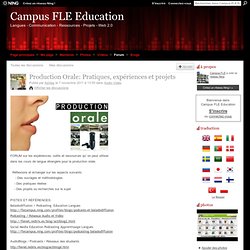 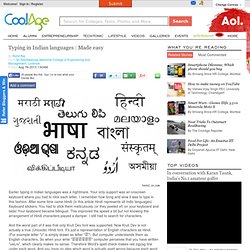 Your only support was an onscreen keyboard where you had to click each letter. I remember how tiring and slow it was to type in this fashion. After some time came Hindi (in this article Hindi represents all Indic languages) Keyboard stickers. Lolspeak. France Renaming "Hashtag" France wants French Twitter users to stop referring to hashtags in favor of a new, au français definition: mot-dièse (sharp word). 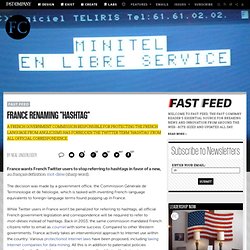 The decision was made by a government office, the Commission Générale de Terminologie et de Néologie, which is tasked with inventing French-language equivalents to foreign-language terms found popping up in France. While Twitter users in France won't be penalized for referring to hashtags, all official French government legislation and correspondence will be required to refer to mot-dièses instead of hashtags. Back in 2003, the same commission mandated French citizens refer to email as courriel with some success. Compared to other Western governments, France actively takes an interventionist approach to Internet use within the country: Various protectionist Internet laws have been proposed, including taxing Internet companies for data mining. 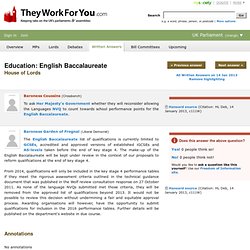 The make-up of the English Baccalaureate will be kept under review in the context of our proposals to reform qualifications at the end of key stage 4. From 2014, qualifications will only be included in the key stage 4 performance tables if they meet the rigorous assessment criteria outlined in the technical guidance document that was published in the Wolf review consultation response on . As none of the language NVQs submitted met those criteria, they will be removed from the approved list of qualifications beyond 2013. It would not be possible to review this decision without undermining a fair and equitable approval process.

How come the past of 'go' is 'went?' By Anatoly Liberman Very long ago, one of our correspondents asked me how irregular forms like good—better and go—went originated. Not only was he aware of the linguistic side of the problem but he also knew the technical term for this phenomenon, namely “suppletion.” One cannot say the simplest sentence in English without running into suppletive forms. Afghanistan: Interpreters: 9 Jan 2013. Baroness Coussins (Crossbench) To ask Her Majesty's Government whether they will grant asylum to Afghan interpreters who have worked with the British armed forces in Afghanistan on the same terms as the asylum granted to Iraqi interpreters; and, if not, why not. Lord Taylor of Holbeach (Conservative) Locally employed staff make an important contribution to the UK's efforts to support the spread of security, stability and development in Afghanistan and the Government take their responsibility for those staff very seriously.

Studying French with Shared Web Documents on Google Drive. Cultural Vistas. Yucatan Living » Culture » Mayan Language for Beginners. When I first visited the Yucatan peninsula in the early 1980s, I was warned that not many people spoke English, so I should be prepared to rely on pigeon Spanish and well-honed charade skills. Unfortunately, I found that the reality was actually worse: if you got away from the hotel desk and waiters, many Yucatecans actually spoke Mayan as their first language and knew only a little street-Spanish. As I ventured outside of tourist areas, I found that most people in small to medium-ish pueblos had at best picked up steet-Spanish when they were 14-17 years old, and that usually happened only if they had lived in a bigger city. People raised only on their family milpa (the classic Maya family corn plot, hacked out ofthe jungle) or in the pueblitos might not know much Spanish at all.

Chinese Mandarin Language Instructor - Virtual Position job. Learn English online: How the internet is changing language. Online, English has become a common language for users from around the world. In the process, the language itself is changing. When America emerged from the ashes of a bruising war with Britain in 1814, the nation was far from united. Noah Webster thought that a common language would bring people together and help create a new identity that would make the country truly independent of the British. Webster's dictionary, now in its 11th edition, adopted the Americanised spellings familiar today - er instead of re in theatre, dropping the u from colour, and losing the double l from words such as traveller. It also documented new words that were uniquely American such as skunk, opossum, hickory, squash and chowder.

Must-Have Job Skills in 2013. Mandarin Pinyin Chart with Audio. Non-Speaking (at Times) Autistic Provides Insight Into Communication ... - Huffington Post. Untitled. The influx of immigrants from all over the world in recent years has brought the languages of dozens of countries to this city and province. Together with a welcome revival of First Nations languages like Cree and Dene, it's like a linguistic breath of fresh air. English, one of Canada's two official languages, still dominates of course, but what about the other - French? According to the provincial government, there are more than 16,000 francophones in the province, with significant numbers in cities like Regina and Saskatoon, but also in smaller communities like Gravelbourg and Willow Bunch. More than 50,000 residents of Saskatchewan are able to communicate in French. Speaking 2 languages also benefits low-income children. A-level foreign languages decline alarms examiners.

A-level French and German take-up fell but Polish, Russian and Mandarin rose. Photograph: Graham Turner for the Guardian The numbers of British teenagers learning European languages fell again in this year's A-levels, prompting examiners to speak of a crisis in the subjects. Entries in French declined to about 12,500 this year, and the number of candidates taking German dropped below 5,000. The number of entries for Spanish declined slightly, at 7,351 this year compared with 7,610 in 2011, although the trend over the last five years is up. Finding my strengths. Sounds Familiar? What you can hear. Chinese Mandarin Language Instructor - Virtual Position job.