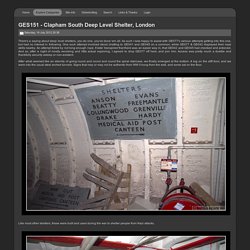 As such I was happy to assist with GE077's various attempts getting into this one, but had no interest in following. One such attempt involved stood chatting to GE041 and GE045 on a common, while GE077 & GE042 displayed their rope skills nearby. An attempt foiled by not long enough rope. It later transpired that there was an easier way in, that GE042 and GE045 had checked and actioned. And so, after a night of mostly reccieing and little actual exploring, I agreed to drop GE077 off here, and join him. Burlington Bunker, under RAF Corsham, Wiltshire.

Under the Corsham Cotswalds approximately eighty feet below ground beneath RAF Corsham, lies the UK’s largest underground bunker and for sixty years one of the best kept secrets in modern MOD history. 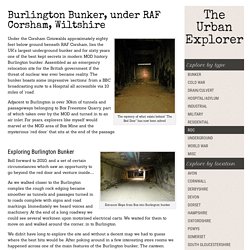 Burlington bunker. Assembled as an emergency relocation site for the British government if the threat of nuclear war ever became reality. The bunker boasts some impressive ‘sections’ from a BBC broadcasting suite to a Hospital all accessible via 10 miles of ‘road’. Vintage Ventures – The Secret Underground Bunker. Open House London is pretty much my favourite time of year in London. 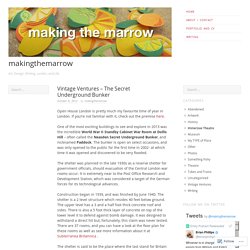 If you’re not familiar with it, check out the premise here. One of the most exciting buildings to see and explore in 2013 was the incredible World War II Standby Cabinet War Room at Dollis Hill – often called the Neasden Secret Underground Bunker, and nicknamed Paddock. Inside London’s Secret Crisis-Command Bunker. If nuclear attack or civil breakdown ever threatens the United Kingdom, the heads of government and the military know where to go. 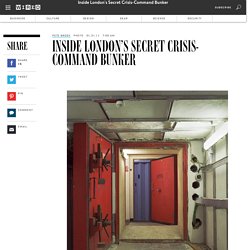 Beneath the streets of London, deeper than the capital’s famous Tube system, exists a hidden bunker on constant standby. Replete with blast doors, a broadcast studio and a giant screen resembling CNN’s massive touchscreen wall on The Situation Room, this nuclear safe house sits in wait for the end of the world. Welcome to the Ministry of Defence’s Crisis Command Center, subterranean England. David Moore’s series The Last Things documents a complex to which no other photographer has ever gained access. Do You Know All These Secret Bunkers in London? Among London's many subterranean secrets, some of the most alluring are the concrete bunkers from the second world war and the cold war — and even those in use today. 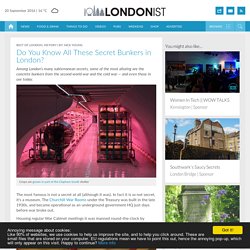 The most famous is not a secret at all (although it was). In fact it is so not secret, it's a museum. The Churchill War Rooms under the Treasury was built in the late 1930s, and became operational as an underground government HQ just days before war broke out. Housing regular War Cabinet meetings it was manned round-the-clock by service personnel who lived down there. Inside London’s Secret Crisis-Command Bunker. Subterranea Britannica: Sites: belsize_park_deep_level_air-raid_shelter. Haverstock Hill London N.W.3 OS Grid Ref: (Southern entrance) TQ275850 Sub Brit site visit 27th January 2000 The Bombings of 1940 forced a reappraisal of deep-shelter policy and at the end of October the Government decided to construct a system of deep shelters linked to existing tube stations. 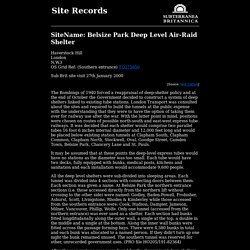 Military citadels under London. A number of military citadels are known to have been constructed underground in central London, dating mostly from the Second World War and the Cold War. 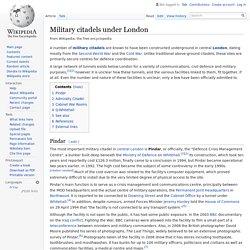 Unlike traditional above-ground citadels, these sites are primarily secure centres for defence coordination. A large network of tunnels exists below London for a variety of communications, civil defence and military purposes,[1][2] however it is unclear how these tunnels, and the various facilities linked to them, fit together, if at all. Even the number and nature of these facilities is unclear; only a few have been officially admitted to. Pindar[edit] Pindar's main function is to serve as a crisis management and communications centre, principally between the MOD headquarters and the actual centre of military operations, the Permanent Joint Headquarters in Northwood. 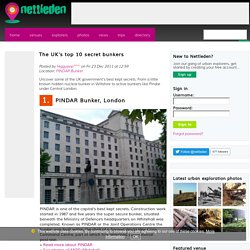 From a little known hidden nuclear bunker in Wiltshire to active bunkers like Pindar under Central London. New to Nettleden? Join our gang of urban explorers, get started by creating your free account... Sign up. New uses for old bunkers #7 – demystifying or dulling the former UK Government citadel at Corsham Quarries? “In disaster movies, when the asteroid is hurtling towards earth, or the super volcano is about to blow, there is always a top-secret location where the president, government officials and top-scientists are whisked away to. 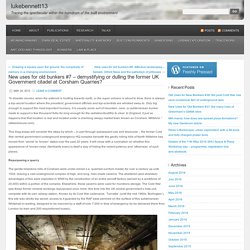 Only big enough to support the most important humans, it is usually some sort of mountain, cave, or subterranean bunker made to support a few thousand folks for long enough for the radiation/dust/fire to clear. In England, it just so happens that that location is real and located under a charming sleepy market town known as Corsham, Wiltshire.” (atlasobscura.com) This blog-essay will consider the steps by which – in part through subsequent use and discourse – the former Cold War central government underground emergency HQ complex beneath the gently rolling hills of North Wiltshire has moved from ‘secret’ to ‘known’ status over the past 20 years.

Repurposing a quarry Describing a secret underground city. Burlington Bunker Photo Gallery. Mile of London Tunnels for Sale, History Included. But the BT tunnels, and one other, were never used by the public because the government needed them for its own operations. 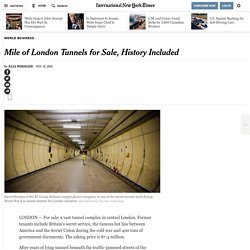 The BT tunnels soon became a temporary base for troops before D-Day while another tunnel was turned into the European headquarters of Gen. Dwight D. Eisenhower. Burlington Bunker - Corsham, Wiltshire. Secret underground bunkers in the UK. Discover some of the UK government's best kept secrets. Clapham North Deep-Level Air Raid Shelter – London, England. One of eight deep-level bomb shelters built around London during World War II, that at Clapham North was constructed between November 1940 and 1942.

GES227 - Kingsway Exchange, London. This was originally the Chancery L@ne Deep Level Shelter, built in 1942, and like other deep level shelters, consisting of two tubes 365m long. It was envisaged as a place to let people hide from the Luftwaffe in the second world war. However, with the Luftwaffe defeated, there was little need for it, and the MoD took an interest. It was used as a solider barracks, and then a Government communications centre. MI6 were based here. Туннели Кингсвэй, Лондон , Cтроительство бункера и выживание.