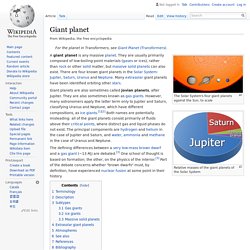 Projecting Space Battle Physics. When I wrote my original article on the physics of space battles, and the accompanying short story, I made the creative decision to speculate on how space battle technologies and tactics would play out if we built from the present day – or, at least, the very near future. 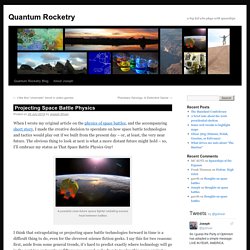 The obvious thing to look at next is what a more distant future might hold – so, I’ll embrace my status as That Space Battle Physics Guy! A possible near-future space fighter radiating excess heat between battles. How to self-publish an ebook. A while back I wrote a column titled "Self-publishing: 25 things you need to know," which was mostly about how to create and sell your own paper book. 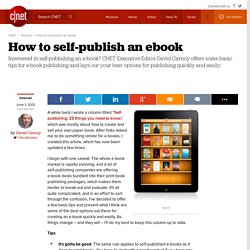 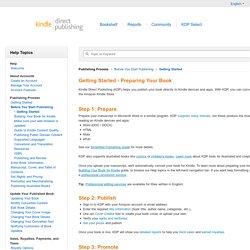 With KDP, you can convert your book to an eBook and sell it on the Amazon Kindle Store. Step 1: Prepare Prepare your manuscript in Microsoft Word or a similar program. KDP supports many formats, but these produce the most consistent results when converted for reading on Kindle devices and apps:Word (DOC / DOCX)HTMLMobiePub. HD 69830. List of multiplanetary systems. Number of extrasolar planet discoveries per year through September 2014. 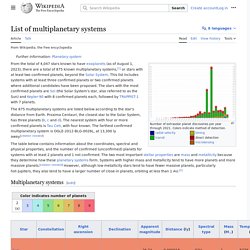 Colors indicate method of detection. Cosmic ray - Wikipedia. Cosmic ray flux versus particle energy Etymology[edit] The term ray is a historical accident, as cosmic rays were at first, and wrongly, thought to be mostly electromagnetic radiation. 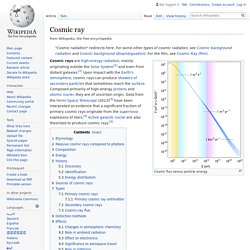 In common scientific usage,[5] high-energy particles with intrinsic mass are known as "cosmic" rays, while photons, which are quanta of electromagnetic radiation (and so have no intrinsic mass) are known by their common names, such as "gamma rays" or "X-rays", depending on their energy. Massive cosmic rays compared to photons[edit] The kinetic mass-energy of massive particles can increase drastically due to relativistic effects. Composition[edit] Health threat from cosmic rays - Wikipedia. The health threat from cosmic rays is the danger posed by galactic cosmic rays and solar energetic particles to astronauts on interplanetary missions or any missions that venture through the Van-Allen Belts or outside the Earth's magnetosphere.[1][2] Galactic cosmic rays (GCRs) consist of high energy protons (85%), helium (14%) and other high energy nuclei (HZE ions).[1] Solar energetic particles consist primarily of protons accelerated by the Sun to high energies via proximity to solar flares and coronal mass ejections. 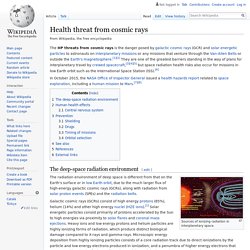 They are one of the most important barriers standing in the way of plans for interplanetary travel by crewed spacecraft.[3][4][5] In October 2015, the NASA Office of Inspector General issued a health hazards report related to space exploration, including a human mission to Mars.[6][7] The deep-space radiation environment[edit] Sources of ionizing radiation in interplanetary space. Life on the Earth's surface is protected from galactic cosmic rays by a number of factors: Gamma-ray burst. Artist's illustration showing the life of a massive star as nuclear fusion converts lighter elements into heavier ones. 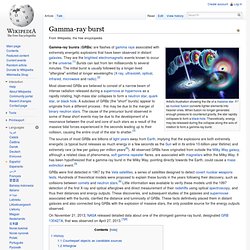 When fusion no longer generates enough pressure to counteract gravity, the star rapidly collapses to form a black hole. Theoretically, energy may be released during the collapse along the axis of rotation to form a gamma-ray burst. Gamma-ray bursts (GRBs) are flashes of gamma rays associated with extremely energetic explosions that have been observed in distant galaxies. They are the brightest electromagnetic events known to occur in the universe.[1] Bursts can last from ten milliseconds to several minutes.

The initial burst is usually followed by a longer-lived "afterglow" emitted at longer wavelengths (X-ray, ultraviolet, optical, infrared, microwave and radio).[2] On November 21, 2013, NASA released detailed data about one of the strongest gamma-ray burst, designated GRB 130427A, that was observed on April 27, 2013.[7][8] History[edit] Navy Deploying New Anti-Torpedo Technology - Defensetech. The Navy is gearing up for deployment and a new round of tests of its Surface Ship Torpedo Defense System — a high tech system designed to protect aircraft carriers by locating, tracking and intercepting incoming torpedoes, Navy leaders said Oct. 24 at the Naval Submarine League, Falls Church, Va. 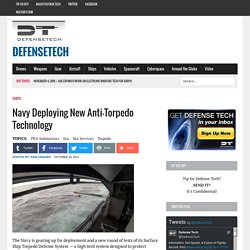 Can Life Thrive Around a Red Dwarf Star? Roughly three quarters of the stars in the galaxy are red dwarfs, but planet searches have typically passed over these tiny faint stars because they were thought to be unfriendly to potential life forms. 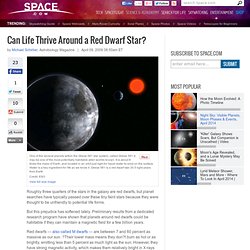 But this prejudice has softened lately. Preliminary results from a dedicated research program have shown that planets around red dwarfs could be habitable if they can maintain a magnetic field for a few billion years. Red dwarfs — also called M dwarfs — are between 7 and 60 percent as massive as our sun. ? Their lower mass means they don? Circumstellar habitable zone. Magnetar: The most dangerous star in the Universe. Extended Range Guided Munition - Wikipedia. Despite the long development time the ERGM never worked as reliably as the older but significantly less expensive laser guided M712 Copperhead. During development, the ERGM failed several tests in which the tail fins failed to deploy at launch, rocket motors did not ignite, or the electronic components did not survive the stress of being shot from a deck gun.[3] In February 2008, guidance components, rocket motors, and tail fins all failed in tests; Raytheon claimed they were testing specific functionalities rather than overall functionality and that they were "on the verge" of making the whole system operate reliably, but the Navy had lost confidence after years of issues and were no longer getting a return on investment.