The Adult Repetitive Behaviour <br>Questionnaire-2. On Pinterest. Century-old drug reverses signs of autism in mice. A single dose of a century-old drug has eliminated autism symptoms in adult mice with an experimental form of the disorder. 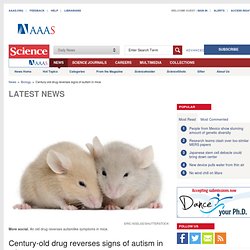 Originally developed to treat African sleeping sickness, the compound, called suramin, quells a heightened stress response in neurons that researchers believe may underlie some traits of autism. The finding raises the hope that some hallmarks of the disorder may not be permanent, but could be correctable even in adulthood. That hope is bolstered by reports from parents who describe their autistic children as being caught behind a veil.

"Sometimes the veil parts, and the children are able to speak and play more normally and use words that didn't seem to be there before, if only for a short time during a fever or other stress" says Robert Naviaux, a geneticist at the University of California, San Diego, who specializes in metabolic disorders. Straight talk about Asperger syndrome. © 2006-2012 Paul Cooijmans Introduction Asperger syndrome, officially called Asperger's disorder in the diagnostic manual, has become a more or less popular diagnosis in the late twentieth century. 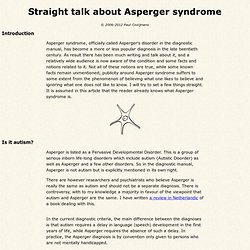 As result there has been much writing and talk about it, and a relatively wide audience is now aware of the condition and some facts and notions related to it. Www.med.upenn.edu/pan/documents/Aspergerjobs.pdf. Gifted adults. Talent in autism: hyper-systemizing, hyper-attention to detail and sensory hypersensitivity. Abstract We argue that hyper-systemizing predisposes individuals to show talent, and review evidence that hyper-systemizing is part of the cognitive style of people with autism spectrum conditions (ASC). 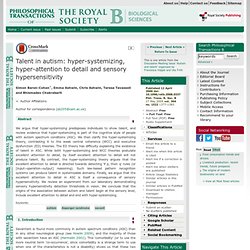 We then clarify the hyper-systemizing theory, contrasting it to the weak central coherence (WCC) and executive dysfunction (ED) theories. The ED theory has difficulty explaining the existence of talent in ASC. While both hyper-systemizing and WCC theories postulate excellent attention to detail, by itself excellent attention to detail will not produce talent. By contrast, the hyper-systemizing theory argues that the excellent attention to detail is directed towards detecting ‘if p, then q’ rules (or [input–operation–output] reasoning). Keywords: 1. Savantism is found more commonly in autism spectrum conditions (ASC) than in any other neurological group (see Howlin 2009), and the majority of those with savantism have an ASC (Hermelin 2002). 2. 3. 4. Box 1. 5. 6. The Emotionally Sensitive Person. The cost of judging is quite high, particularly for emotionally sensitive people. 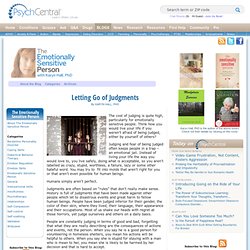 Think how you would live your life if you weren’t afraid of being judged, either by yourself of others? Judging and fear of being judged often keeps people in a trap – an emotional jail. Instead of living your life the way you would love to, you live safely, doing what is acceptable, so you aren’t labelled as crazy, stupid, worthless, a failure, lazy or some other hateful word. Life through the eyes of a female with Aspergers. Day 81: 20 Things Not to Say to a Person with Aspergers. Image found at takealeftatthemoon.blogspot.com This is tailored to adults who have Aspergers and recently were diagnosed, but the list can apply to many ages and many conditions other than Aspergers Syndrome. 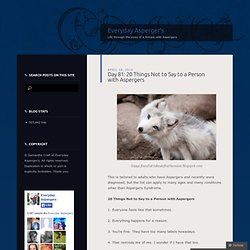 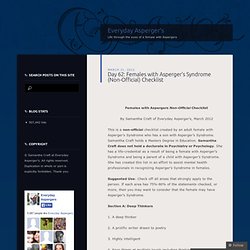 Samantha Craft holds a Masters Degree in Education. Samantha Craft does not hold a doctorate in Psychiatry or Psychology. She has a life-credential as a result of being a female with Asperger’s Syndrome and being a parent of a child with Asperger’s Syndrome. Suggested Use: Check off all areas that strongly apply to the person. Section A: Deep Thinkers 1. 2. 3. 4. 5. 6.

Executive Function Disorder and the Senegal Parrot. I just thought I’d add some links I found useful with what I have been researching. 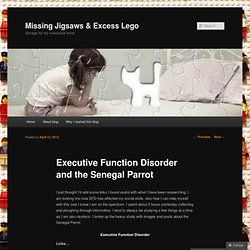 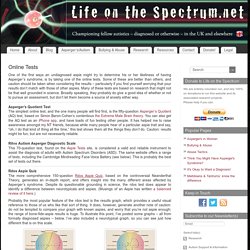 Some of these are better than others, and caution should be taken when considering the results – particularly if you find yourself worrying that your results don’t match with those of other aspies. Many of these tests are based on research that might not be that well grounded in science. Broadly speaking, they probably do give a good idea of whether or not to pursue an assessment, but don’t let them become a source of anxiety either way. Asperger’s Quotient Test The simplest online test, and the one many people will find first, is the fifty-question Asperger’s Quotient (AQ) test, based on Simon Baron-Cohen’s contentious the Extreme Male Brain theory. You can also get the AQ test as an iPhone app, and have loads of fun testing other people. Is Overactive Empathy Ruining Your Life? As a very empathic person (a VEP ), I have spent a lot of energy over the last few years learning how to manage my empathy and establishing better energetic boundaries with those around me. 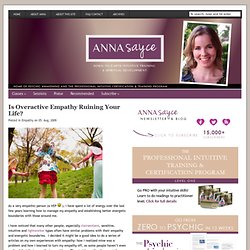 I have noticed that many other people, especially clairsentient, sensitive, intuitive and lightworker types often have similar problems with their empathy and energetic boundaries. I decided it might be a good idea to do a series of articles on my own experiences with empathy: how I realized mine was a problem and how I learned to turn my empathy off, as some people haven’t even realized that their empathy is a problem. They just know they have weird tendencies to feel bad around other people.