CNN - Obama on globalization. Why is globalisation under attack? Image copyright Getty Images Free trade and globalisation seem to be under siege from a broad and loud range of opponents. 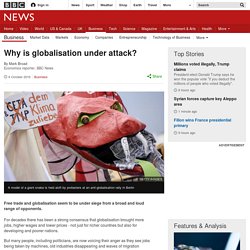 For decades there has been a strong consensus that globalisation brought more jobs, higher wages and lower prices - not just for richer countries but also for developing and poorer nations. But many people, including politicians, are now voicing their anger as they see jobs being taken by machines, old industries disappearing and waves of migration disturbing the established order. You don't have to look far to see the effect of those concerns in recent events.

Globalisation: Where on the elephant are you? The Brexit referendum was dominated by concerns over immigration, the rise of Donald Trump has brought back the rhetoric of protectionismin the US and there have been mass protests in Europe over prospective international trade deals. What is behind this backlash and what can be done to address this crisis of globalisation?

'Free trade is stupid trade' Getty Images. Globalisation once made the world go around. Is it about to grind to a halt? His speech was like one normally expected of an American president. 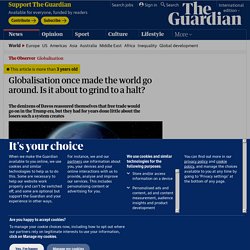 Countries must resist the temptation to retreat into harbour, the world leader said to a packed and admiring audience, but instead have the courage to swim in the vast ocean of the global market. This was the kind of paean to free trade that might have come from John F Kennedy, George W Bush or Bill Clinton – all occupants of the White House who saw it as the United States’s role to defend the open international trading system set up at the end of the second world war. This, though, was China’s president, Xi Jinping, in Davos last week, making it clear that he was prepared to fill the vacuum if Donald Trump went ahead with the sort of protectionist policies he had proposed in his election campaign.

The new US president has said he will renegotiate the Nafta free trade agreement between the US, Canada and Mexico and slap duties on imports from countries that don’t play by global trade rules. And it is not just Trump. Neoliberalism turned our world into a business. And there are two big winners. Tomorrow, Silicon Valley leaders will sit down for a summit with Donald Trump. 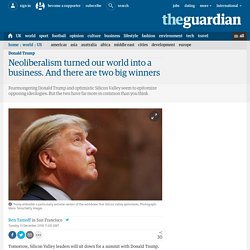 Larry Page, Tim Cook, Elon Musk, and Sheryl Sandberg are all expected to attend. The agenda is unknown, but the mood is likely to be tense. After all, tech executives overwhelmingly backed Hillary Clinton and loudly railed against the dangers posed by a Trump presidency. And Trump regularly lashed out at Silicon Valley on the campaign trail, bashing the industry for building hardware overseas and importing foreign engineers. But tech has little to fear from Trump. And that’s only the low-hanging fruit. But there’s another, deeper reason that tech and Trump will prove highly compatible.

This worldview can be summarized in a single word: neoliberalism. No industry has played a larger role in evangelizing the neoliberal faith than Silicon Valley. If Silicon Valley is turning our personal lives into a business, then Trump hopes to turn our government into one. The Future of Work. The modern workplace is constantly evolving. 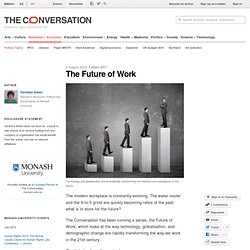 The water cooler and the 9-to-5 grind are quickly becoming relics of the past; what is in store for the future? The Conversation has been running a series, the Future of Work, which looks at the way technology, globalisation, and demographic change are rapidly transforming the way we work in the 21st century. Read stories from the series here. On the rise of freelance workers: If you’re sick of sticking it to the man, is it truly better to become your own boss? University of South Australia’s Barbara Pocock highlights the imperfect freedoms that pose a challenge to independent contractors. “As Dederer’s story shows, the freelancer’s life is not all a happy or smooth one, even in a bustling haven of freelancing like Seattle. Read the full story here. Home sweet office: A growing number of workers have flocked from the cubicle to the comfort of their own home. A boom - but for whom?