Charan-Vaitla film titled Bruce Lee. Akkineni Nagarjuna Birthday special photo. Is Jagan slipping into bad politics again? Politics is all about power and the state power is meant to acquire ownership over the state assets. 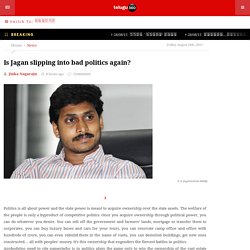 The welfare of the people is only a byproduct of competitive politics. Once you acquire ownership through political power, you can do whatever you desire. You can sell off the government and farmers’ lands, mortgage or transfer them to corporates, you can buy luxury buses and cars for your tours, you can renovate camp office and office with hundreds of crore, you can even rebuild them in the name of vastu, you can demolish buildings, get new ones constructed… all with peoples’ money. KE demands Rs 1 lakh crore package to Rayalaseema. Deputy chief minister and revenue minister Krishna Murthy demanded Rs one lakh crore package to the development of Rayalaseema region. 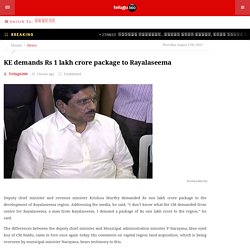 Addressing the media, he said, “I don’t know what the CM demanded from centre for Rayalaseema, a man from Rayalasseem, I demand a package of Rs one lakh crore to the region,” he said. The differences between the deputy chief minister and Municipal administration minister P Narayana, blue eyed boy of CM Naidu, came to fore once again today. His comments on capital region land acquisition, which is being overseen by municipal minister Narayana, bears testimony to this. AP to promote SC& ST entrepreneurs. Parineeti Chopra and Disha Patani opposite Naga Chaitanya ?? Shivam shoot progressing in Sweden. 'Bhale Bhale Magadivoi' censored with clean 'U' Koduri Kalyan Interview : It is a strange feeling and experience working with Teja. Koduri Kalyan, ever since his debut with Aithe hasn’t composed for multiple films in a row. 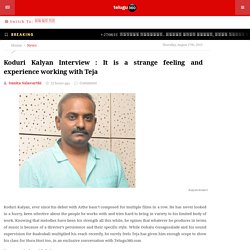 He has never looked in a hurry, been selective about the people he works with and tries hard to bring in variety to his limited body of work. Knowing that melodies have been his strength all this while, he opines that whatever he produces in terms of music is because of a director’s persistence and their specific style. While Oohalu Gusagusalade and his sound supervision for Baahubali multiplied his reach recently, he surely feels Teja has given him enough scope to show his class for Hora Hori too, in an exclusive conversation with Telugu360.com Your association with Teja...

This is the first time I have composed for Teja. TRS Kavitha produces a film. Brahmotsavam first schedule from September 10th. Rudrama Devi gets a new release date. Special treat for Akkineni fans on Nagarjuna's birthday. 'Placard' promotions for Size Zero. Pawan Effect : Land Acquisition Kept in Abeyance. Pawan Kalyan’s warning appears to have had its impact on state government, which wanted to complete the land acquisition in river side villages by the end of August. 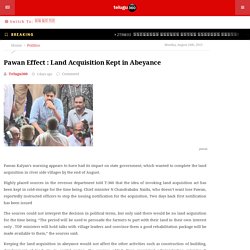 Highly placed sources in the revenue department told T-360 that the idea of invoking land acquisition act has been kept in cold-storage for the time being. Chief minister N Chandrababu Naidu, who doesn’t want lose Pawan, reportedly instructed officers to stop the issuing notification for the acquisition. Two days back first notification has been issued. One bar for every 13,000 population in Hyderabad. Telangana state government has announced that there would be a bar for every 13,000 population. 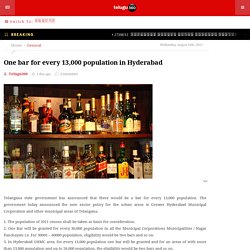 The government today announced the new excise policy for the urban areas ie Greater Hyderabad Municipal Corporation and other municipal areas of Telangana. 1. The population of 2011 census shall be taken as basis for consideration. 2. One Bar will be granted for every 30,000 population in all the Municipal Corporations Municipalities / Nagar Panchayats i.e. Dark Tuesday for Gods in Telangana. For the first time in India, the archakas of a state left the Gods in dark. 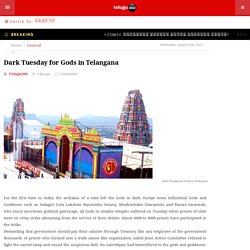 Except some influential Gods and Goddesses such as Yadagiri Guta Lakshmi Narasimha Swamy, Bhadrachalm Sitaramulu and Basara Saraswati, who enjoy enormous political patronage, all Gods in smaller temples suffered on Tuesday when priests of state went on relay strike abstaining from the service of their deities.

About 6000 to 8000 priests have participated in the strike. Demanding that government should pay their salaries through Treasury like any employee of the government thousands of priests who formed into a trade union like organization called Joint Action Committee refused to light the sacred lamp and sound the auspicious bell. No naivedyam had beenoffered to the gods and goddesses. No prasadam served to the devotees. Nora Fatehi sizzles in Mega hero's film. 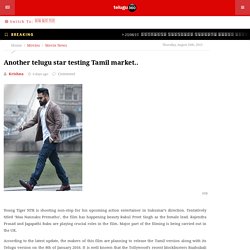 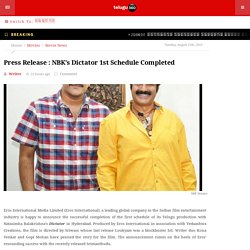 Produced by Eros International in association with Vedaashwa Creations, the film is directed by Sriwass whose last release Loukyam was a blockbuster hit. Writer duo Kona Venkat and Gopi Mohan have penned the story for the film. The announcement comes on the heels of Eros’ resounding success with the recently released Srimanthudu. Dictator marks Balakrishna’s 99th film. Trivikram to lend script for Pawan Kalyan. Pawan Kalyan In Dil Raju Production. Race Gurram sequel on cards ? Hotshot filmmaker Surender Reddy hinted on a sequel to his blockbuster action entertainer Race Gurram. 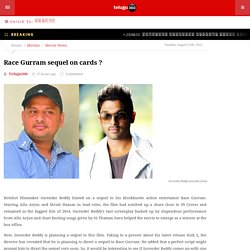 Starring Allu Arjun and Shruti Haasan in lead roles, the film had notched up a share close to 59 Crores and remained as the biggest hits of 2014. Surender Reddy’s taut screenplay backed up by stupendous performance from Allu Arjun and chart busting songs given by SS Thaman have helped the movie to emerge as a winner at the box office. Now, Surender Reddy is planning a sequel to this film. Taking to a presser about his latest release Kick 2, the director has revealed that he is planning to direct a sequel to Race Gurram. Akhil To Endorse Mobile Brand. Kanche audio and trailer release dates. Trisha Plays A 20 Year Old In Nayaki. Sections 46, 90 and 94 : What do they offer to AP?

The Centre reiterated its commitment to implement Section 46, Section 90 and Section 94 of Andhra Pradesh Reorganization Act -2014, to help the recover from what finance minister Arun Jaitley called “broken development”. 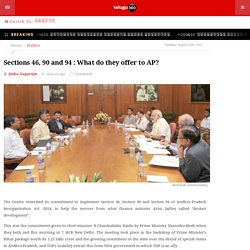 This was the commitment given to chief minister N Chandrababu Naidu by Prime Minister Narendra Modi when they both met this morning in 7, RCR New Delhi. The meeting took place in the backdrop of Prime Minister’s Bihar package worth Rs 1.25 lakh crore and the growing resentment in the state over the denial of special status to Andhra Pradesh, and TDP’s inability extract this from NDA government in which TDP is an ally. Arun Jaitley said Centre would ask the NITI Ayog to prepare the road map for the implementation of Section 46, Section 90 and Section 94 of APR Act-2014 .

What are these Sections? Distribution of revenue. Polavaram Fiscal measures including tax incentives. Part 2 : Jai Chiranjeeva - A Tribute to Victorious Megastar. Notwithstanding his failures in politics, there are enough lessons from Chiranjeevi’s filmography that will inspire the newcomers and experienced actors to mould careers as successfully as him.

But the question is: Can he re-invent himself to stay relevant after his 150th film ? By the end of the 80s, Chiranjeevi had scaled dizzy heights in stardom. From Supreme Hero to Megastar, he had seen all adulation from toddlers to teenagers and urban crowds to the ladies, he became a darling at the box-office. CM Naidu asks Modi to look beyond APR Act-2014. Chief minister Chandrababu Naidu today cautioned Prime Minister Narendra Modi not to delay the financial assistance to Andhra Pradesh as promised as it would lead to misgivings in the minds of people of the state. Naidu presented a memorandum to the Prime Minister today listing the areas that need central intervention. While laying stress on the implementation of provision incorporated in the AP Reorganization Act 2014. he also urged Prime Minister to think out of the box of Act.

“Keeping in view infrastructural deficit and the gap in the social development indicators, the state of AP requires substantial financial support far beyond what has been promised in the APR Act-2014,” the memorandum said. Naidu placed before the Prime Minister the general mood of the people of Andhra Pradesh. “During my earlier meetings with you and your ministers, I was assured that all provisions of the APR Act would be implemented in letter and spirit. Who tutored Pawan before reaching Penumaka?

The worry that Pawan Kalyan’s over enthusiasm would only add fuel to the fire the opposition trying to ignite in the capital region is said to have forced chief minister Naidu to keep the Land Acquisition (LA) process , set in motion last week, in abeyance. According to sources in TDP, opposition YSRC is already in combative mode and rubbing the bellicose a actor on wrong side would aggravate the problem instead of helping address it. TDP accused that YSRC wass fomenting trouble in these villages. stating that there had been concerted effort to incite the people oppose the land acquisition process, TDP sources said they knew who tutored the Pawan Kalyan before he reached Penumaka yesterday.

The film was a slow starter, got mixed reviews. God Cheated Me - Bahubali's art director Manu Jagadh - Telugu360. Manu Jagadh had worked as an art director for 16 films before being offered Baahubali. Anushka's Size Zero First Look - Telugu360. Bahubali Review-A Modern visual extravaganza of an Old tale - Telugu360. A heart-touching family drama. Special status alone not enough : Naidu warns - Telugu360. Naidu inaugurates controversial 'Pattiseema' - Telugu360. Telugu360's Comments. Enterprising and Ambitious Roopa Vaitla - Telugu360. Roopa Vaitla ( Wife of top director Srinu Vaitla) ’s glistening skin says it all and it is an open secret. She has been eating, talking and thinking about her venture Awrganics for the past few years now. She doesn’t use sugar, has no white products at home and her kids don’t eat chips and junk. The entire meal and snacks baked, cooked at home is organic. Pawan kalyan's Sardaar first look.