A Comparison of Free Jazz to 20th-Century Classical Music. Table of Contents: Introduction The term "free jazz"—coined in 1964 from an Ornette Coleman recording to describe the "new thing" developing in jazz at that time—is even today little understood by jazz musicians and the music community at large. 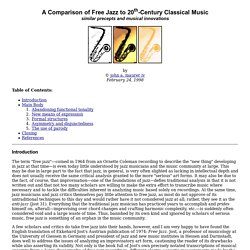 This may be due in large part to the fact that jazz, in general, is very often slighted as lacking in intellectual depth and does not usually receive the same critical analysis granted to the more "serious" art forms. It may also be due to the fact, of course, that improvisation—one of the foundations of jazz—defies traditional analysis in that it is not written out and that not too many scholars are willing to make the extra effort to transcribe music where necessary and to tackle the difficulties inherent in analyzing music based solely on recordings.

Deconstructionism - By Movement / School - The Basics of Philosophy. Physics' best-known lectures are now available to everyone on the web. Perplexity versus error rate for language modeling. It's fair to say that perplexity is the de facto standard for evaluating language models. 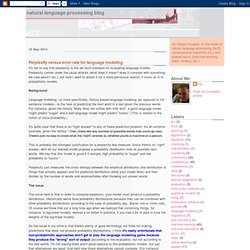 Perplexity comes under the usual attacks (what does it mean? Does it correlate with something we care about? Etc.), but here I want to attack it for a more pernicious reason: it locks us in to probabilistic models. Background Language modeling---or more specifically, history-based language modeling (as opposed to full sentence models)---is the task of predicting the next word in a text given the previous words. It's quite clear that there is no "right answer" to any of these prediction problem. This is probably the strongest justification for a perplexity-like measure. Perplexity just measures the cross entropy between the empirical distribution (the distribution of things that actually appear) and the predicted distribution (what your model likes) and then divides by the number of words and exponentiates after throwing out unseen words.

The Issue When I Ran Into This Oh well. Arts & Letters Daily - ideas, criticism, debate. Collective Intelligence and E-Learning 2.0. An Introduction to Connective Knowledge. You are not logged in. [] [] Revised and Updated (minor corrections and typos only) and placed in MS-Word Document form, November 27, 2007. 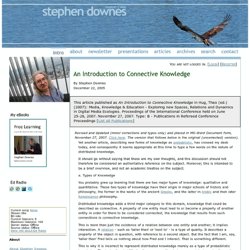 Click here . The version that follows below is the original (uncorrected) version). Yet another article, describing new forms of knowledge as probablistic , has crossed my desk today, and consequently it seems appropriate at this time to type a few words on the nature of distributed knowledge. It should go without saying that these are my own thoughts, and this discussion should not therefore be considered an authoritative reference on the subject. A. Eos: Human responses to change.

Philosophy. Tools. Digital humanities. The Digital Humanities are an area of research, teaching, and creation concerned with the intersection of computing and the disciplines of the humanities. 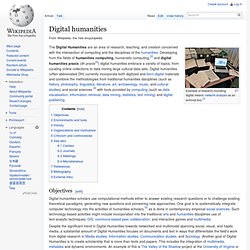 Objectives[edit] A growing number of researchers in digital humanities are using computational methods for the analysis of large cultural data sets. Technology and the novel, from Blake to Ballard. There's a scene in Don Quixote where the deluded would-be knight is listening to fulling mills. 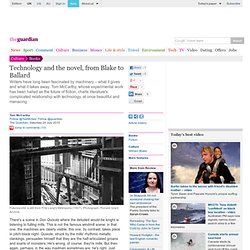 This is not the famous windmill scene: in that one, the machines are clearly visible; this one, by contrast, takes place in pitch-black night. Quixote, struck by the mills' rhythmic metallic clankings, persuades himself that they are the half-articulated groans and snarls of monsters. He's wrong, of course: they're mills. But then again, perhaps, in the way madmen sometimes are, he's right. Just maybe, in the looping chains of broken syllables, the clashing metre of compounded phonemes, he's picking up a message, a weak signal slowly forming in time's static: an announcement, for those astute enough to hear, of a monstrous age of mechanised industry lurking in the night of the future. C by Tom McCarthy For centuries, literature has been haunted by technology. Melville wrote a whole story about a mill: "The Tartarus of Maids". Painting – or writing. Put on poor old greatgrandfather. Reading in a Digital Age: an article by Sven Birkerts. Essays - Spring 2010 Print Notes on why the novel and the Internet are opposites, and why the latter both undermines the former and makes it more necessary By Sven Birkerts The nature of transition, how change works its way through a system, how people acclimate to the new—all these questions. 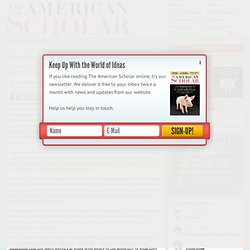 So much of the change is driven by technologies that are elusive if not altogether invisible in their operation.