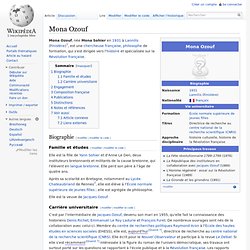 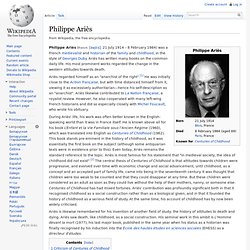 Ariès has written many books on the common daily life. His most prominent works regarded the change in the western attitudes towards death. Ariès regarded himself as an "anarchist of the right". He was initially close to the Action française, but with time distanced himself from it, viewing it as excessively authoritarian—hence his self-description as an "anarchist". Ariès likewise contributed to La Nation française, a royalist review. Centuries of Childhood: A Social History of Family Life: Philippe Aries: 9780394702865: Amazon.com. Marc Bloch. R Youth and First World War[edit] Born in Lyon to a Jewish family, the son of the professor of ancient history Gustave Bloch, Marc studied at the École Normale Supérieure and Fondation Thiers in Paris, then at Berlin and Leipzig. 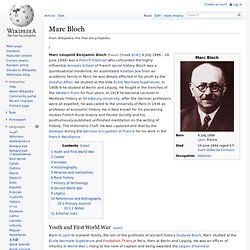 He was an officer of infantry in World War I, rising to the rank of captain and being awarded the Légion d'honneur. After the war, he went to the university at Strasbourg, then in 1936 succeeded Henri Hauser as professor of economic history at the Sorbonne. The Royal Touch: Monarchy and Miracles in France and England: Marc Bloch: 9780880294089: Amazon.com. 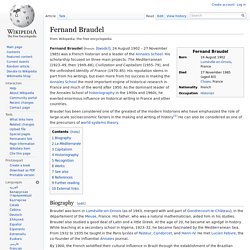 His scholarship focused on three main projects: The Mediterranean (1923–49, then 1949–66), Civilization and Capitalism (1955–79), and the unfinished Identity of France (1970–85). His reputation stems in part from his writings, but even more from his success in making the Annales School the most important engine of historical research in France and much of the world after 1950. As the dominant leader of the Annales School of historiography in the 1950s and 1960s, he exerted enormous influence on historical writing in France and other countries. The Mediterranean and the Mediterranean World in the Age of Philip II: Fernand Braudel, Richard Lawrence Ollard, Sian Reynolds: 9780060159580: Amazon.com. Civilization and Capitalism, 15th-18th Century, Vol. I: The Structure of Everyday Life (Civilization & Capitalism, 15th-18th Century): Fernand Braudel, Siân Reynold: 9780520081147: Amazon.com. 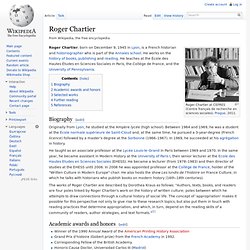 Biography[edit] Originally from Lyon, he studied at the Ampère lycée (high school). Between 1964 and 1969, he was a student at the École normale supérieure de Saint-Cloud and, at the same time, he pursued a 3-year-degree (French licence) followed by a master's degree at the Sorbonne (1966–1967). The Cultural Origins of the French Revolution (Bicentennial Reflections on the French Revolution): Roger Chartier, Lydia G. Cochrane: 9780822309932: Amazon.com. Pierre Chaunu. Pierre Chaunu (17 August 1923 — 22 October 2009)[1] was a French historian. 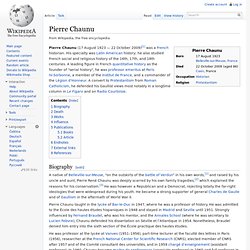 His specialty was Latin American history; he also studied French social and religious history of the 16th, 17th, and 18th centuries. A leading figure in French quantitative history as the founder of "serial history", he was professor emeritus at Paris IV-Sorbonne, a member of the Institut de France, and a commander of the Légion d'Honneur. A convert to Protestantism from Roman Catholicism, he defended his Gaullist views most notably in a longtime column in Le Figaro and on Radio Courtoisie. Biography[edit] A native of Belleville-sur-Meuse, “on the outskirts of the battle of Verdun” in his own words,[1] and raised by his uncle and aunt, Pierre René Chaunu was deeply scarred by his own family tragedies,[2] which explained the reasons for his conservatism.[3] He was however a Republican and a Democrat, rejecting totally the far-right ideologies that were widespread during his youth. 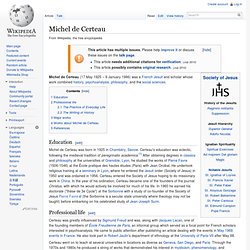 Education[edit] Michel de Certeau was born in 1925 in Chambéry, Savoie. Certeau's education was eclectic, following the medieval tradition of peregrinatio academica.[1] After obtaining degrees in classics and philosophy at the universities of Grenoble, Lyon, he studied the works of Pierre Favre (1506-1546) at the École pratique des hautes études (Paris) with Jean Orcibal. He undertook religious training at a seminary in Lyon, where he entered the Jesuit order (Society of Jesus) in 1950 and was ordained in 1956. Certeau entered the Society of Jesus hoping to do missionary work in China. Professional life[edit] The Practice of Everyday Life[edit] To date, Certeau's most well-known and influential work in the United States has been The Practice of Everyday Life. The Writing of History[edit] Major works[edit] The Practice of Everyday Life: Michel de Certeau: 9780520271456: Amazon.com. Georges Duby. Georges Duby (7 October 1919 – 3 December 1996) was a French historian specializing in the social and economic history of the Middle Ages. 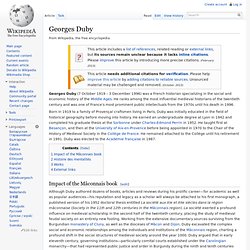 He ranks among the most influential medieval historians of the twentieth century and was one of France's most prominent public intellectuals from the 1970s until his death in 1996. Born in 1919 to a family of Provençal craftsmen living in Paris, Duby was initially educated in the field of historical geography before moving into history. He earned an undergraduate degree at Lyon in 1942 and completed his graduate thesis at the Sorbonne under Charles-Edmond Perrin in 1952. He taught first at Besançon, and then at the University of Aix-en-Provence before being appointed in 1970 to the Chair of the History of Medieval Society in the Collège de France. He remained attached to the Collège until his retirement in 1991. 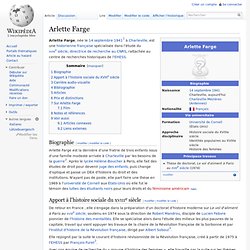 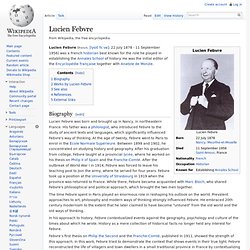 He was the initial editor of the Encyclopédie française together with Anatole de Monzie. Biography[edit] Lucien Febvre was born and brought up in Nancy, in northeastern France. His father was a philologist, who introduced Febvre to the study of ancient texts and languages, which significantly influenced Febvre's way of thinking.

At the age of twenty, Febvre went to Paris to enrol in the École Normale Supérieure. The time Febvre spent in Paris played an enormous role in reshaping his outlook on the world. In his approach to history, Febvre contextualized events against the geography, psychology and culture of the times about which he wrote. The Problem of Unbelief in the 16th Century: The Religion of Rabelais: Lucien Febvre, Beatrice Gottlieb: 9780674708266: Amazon.com. François Furet. François Furet (French: [fʁɑ̃swa fyʁɛ]; 27 March 1927, Paris – 12 July 1997, Figeac) was a French historian, and president of the Saint-Simon Foundation, well known for his books on the French Revolution.

He was elected to the Académie française in March 1997, just three months before he died in July. Biography[edit] Born in Paris on 27 March 1927, into a wealthy family, François Furet was a brilliant student who graduated from the Sorbonne with the highest honors and soon decided on a life of research, teaching and writing.[1] He received his education at the Lycée Janson de Sailly and at the faculty of art and law of Paris. Later he was awarded an "agrégation".

Ernest Labrousse. Camille-Ernest Labrousse (Barbezieux, Poitou-Charente, March 16, 1895 – 24 May 1988, Paris) was a French historian specializing in social and economic history. Labrousse established a historical model centered on three nodes—economic, social and cultural—inventing the quantitative history sometimes now called "cliometrics". Eschewing biographies and the narrative accounts of individual witnesses, which have provided the backbone of traditional historiography, he applied statistical methods and influenced a whole generation. Fernand Braudel said that if it were not for Labrousse, "historians would never have set to work as willingly as they did on the study of wages and prices".[1] Labrousse's prominence was also a result of his post at the Sorbonne, where he supervised a generation of French post-doctoral thèses and his organizational skills from the 1950s onwards in leading team research efforts that were models of the historian's craft.[2]

From 1972 to 1977, he was the head of the École des hautes études en sciences sociales (EHESS). He was a leading figure of New History, related to cultural history. Le Goff argued that the Middle Ages formed a civilization of its own, distinct from both the Greco-Roman antiquity and the modern world. Life and writings[edit] A prolific medievalist of international renown, Le Goff was sometimes considered the principal heir and continuator of the movement known as Annales School (École des Annales), founded by his intellectual mentor Marc Bloch.

In 2012, he was awarded the National Humanities Medal by President Barack Obama. He is consistently rated as one of the most popular professors at UCLA, and has published many books as well as dozens of articles in scholarly journals as well as reviews and smaller articles. Early life[edit] Born in Cuba, Ruiz was active during the Cuban Revolution.