Recover access to a SQL Server instance. By: Aaron Bertrand | Read Comments (80) | Related Tips: More > Security Problem Starting with SQL Server 2008, the local Administrators group is no longer added by default during SQL Server setup; you even have to use a manual step to add the current user as a local administrator. 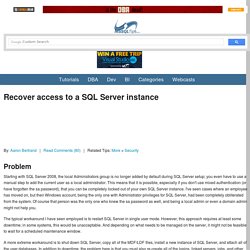 This means that it is possible, especially if you don't use mixed authentication (or have forgotten the sa password), that you can be completely locked out of your own SQL Server instance. I've seen cases where an employee has moved on, but their Windows account, being the only one with Administrator privileges for SQL Server, had been completely obliterated from the system. Of course that person was the only one who knew the sa password as well, and being a local admin or even a domain admin might not help you.

The typical workaround I have seen employed is to restart SQL Server in single user mode. Solution The process to get back up and running is quite simple. Caveats Conclusion Next Steps Last Update: 8/30/2012. Application Pool Identities. Introduction Whether you are running your site on your own server or in the cloud, security must be at the top of your priority list. 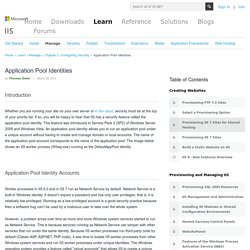 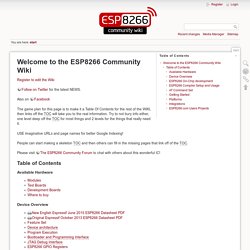 Also on Facebook The game plan for this page is to make it a Table Of Contents for the rest of the WIKI, then links off the TOC will take you to the real information. Try to not bury info either, one level deep off the TOC for most things and 2 levels for the things that really need it. USE imaginative URLs and page names for better Google Indexing! Hackster. Battery Powered Arduino Applications through FreeRTOS. TCP Connection over GPRS using SIM900 and AT Commands. Raspberry Pi and the Serial Port.

Raspberry Pi and the Serial Port By default the Raspberry Pi’s serial port is configured to be used for console input/output. 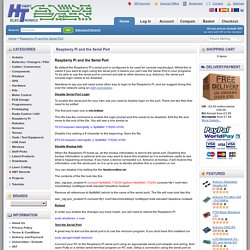 Whilst this is useful if you want to login using the serial port, it means you can't use the Serial Port in your programs. Blog de l'équipe support IIS/Azure France — French IIS/Azure Support Team Blog. I’ve recently worked on a very interesting file upload issue where my customer was hitting a 2 GB upload limit using Internet Explorer, IIS 7.5 and a simple file upload form with a file input element.After doing some research and a couple of tests, I was able to build a simple “POC” project showing how to upload up to 4 GB using the following configuration: Internet Explorer 10 client Windows 8 / IIS 8 Application configured to run in .Net 4.5 Classic Pipeline Web.Config configured as follows : simple upload.aspx test page : 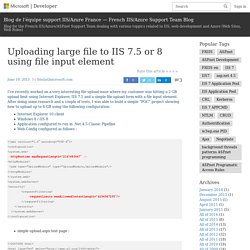 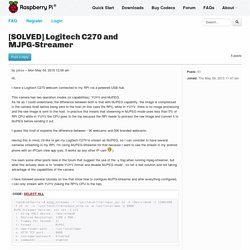 This camera has two operation modes (or capabilities): YUYV and MJPEG.As far as I could understand, the difference between both is that with MJPEG capability, the image is compressed in the camera itself before being sent to the host (in this case the RPI), while in YUYV, there is no image processing and the raw image is sent to the host. Application Pool Identities. How to Send Push Notifications from Raspberry Pi. This project demonstrates how to send push notifications from Raspberry Pi to iOS and Android devices using a free push app. 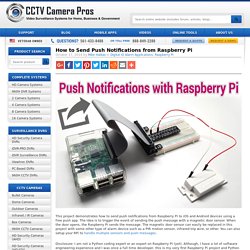 The idea is to trigger the event of sending the push message with a magnetic door sensor. When the door opens, the Raspberry Pi sends the message. The magnetic door sensor can easily be replaced in this project with some other type of alarm device such as a PIR motion sensor, infrared trip wire, or other. You can also setup your RPi to handle multiple sensors and push messages. REST API on a Pi, Part 2: control your GPIO I/O ports over the internet – The Floppy Disk. [SOLVED] Logitech C270 and MJPG-Streamer. Hi, I have a Logitech C270 webcam connected to my RPI via a powered USB hub. 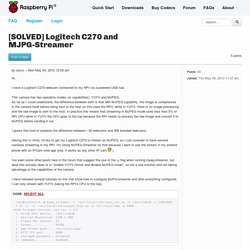 This camera has two operation modes (or capabilities): YUYV and MJPEG.As far as I could understand, the difference between both is that with MJPEG capability, the image is compressed in the camera itself before being sent to the host (in this case the RPI), while in YUYV, there is no image processing and the raw image is sent to the host.

In practice this means that streaming in MJPEG mode uses less than 5% of RPI CPU while in YUYV the CPU goes to the top because the RPI needs to process the raw image and convert it to MJPEG before sending it out. I guess this kind of explains the difference between ~3€ webcams and 50€ branded webcams. Use a Raspberry Pi to remotely watch your home. February 12, 2016 AT 5:00 am Make a remote CCTV with Raspberry Pi. via tech radar. 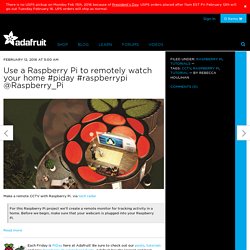 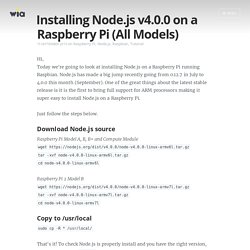 Node.js has made a big jump recently going from 0.12.7 in July to 4.0.0 this month (September). One of the great things about the latest stable release is it is the first to bring full support for ARM processors making it super easy to install Node.js on a Raspberry Pi. Just follow the steps below. Download Node.js source. Raspberry Pi, Camera and Node.js - Live Streaming with Websockets #IoT. A few days ago Bala Kolluru has reached out to me asking if we can control a Raspberry Pi camera module using Web browser, so he can view a live stream from any HTML5 powered device. I was intrigued by this idea and wanted to give it a try.

Build a Raspberry Pi Webcam Server in Minutes. This Raspberry Pi Webcam Server tutorial will take you through on how to have your very own Webcam that is visible on a webpage. If you’re after a more security like system then check out the Raspberry Pi security camera tutorial it features fully-fledged web streaming, motion detection, recording and multi camera functionality. Equipment Required Optional. How to Set up a Raspberry Pi as a Wireless Access Point. Getting-started-with-the-esp8266 [ESP8266 Support WIKI] Internet of Home Things » 4 ways to eliminate ESP8266 resets. Remember the movie “Groundhog Day “? Original Saturday Night Live cast member Bill Murray re-lives Groundhog Day over and over again. And still again. Kinda like the ESP8266 when it repeatedly resetting… Nothing you try makes a difference! If you have worked with the ESP8266 for any length of time, you have undoubtedly experienced the endless resets on power-up.

NodeMCU Firmware for the ESP8266. Introducing NodeMCU The NodeMCU Firmware is an open source project that provides an abstraction layer on top of the Expressif SDK for the ESP8266. While the SDK itself provides low-level access to the peripherals of the ESP8266EX chip, NodeMCU provides a high level API that hides a lot of the implementation details of how the chip works. TMRh20s Project Blog. Arduino: Using the full potential of NRF24L01 radio modulesA New, Optimized Fork of the RF24 Radio Library: High speed data transfers and more! Includes updates and new features for the RF24Network Library. Reprap development and further adventures in DIY 3D printing: Universal Paste extruder - Ceramic, Food and Real Chocolate 3D Printing...

Raspberry Pi Color Tracking Using PID. In this project I implemented OpenCV color recognition on the Raspberry Pi that uses PID to control the pan-tilt servo system. File upload permissions issue on Windows Server 2008 R2 IIS 7.5 PHP 5.3 with Drupal v.7.26. Ver documentos de Office en línea - Soporte técnico de Office. My braindump: Removing Raspberry Pi partitions from SD card under Windows 7. On with the fun ... as I said the data from Google calendar events come back from the API as a Python list, and if there are no events to display the code from returns an error. Online CSS Unminifier - Peter Coles. How to Set Up SSL on IIS 7. Introduction The steps for configuring Secure Sockets Layer (SSL) for a site are the same in IIS 7 and above and IIS 6.0, and include the following: Open Source Robotic Arm (Lite Arm i2) by Armatec. Syncfusion. Surface data sensors during drilling -

By analyzing cuttings, drilling mud, and drilling parameters for hydrocarbon-associated phenomena, we can develop a great deal of information and understanding concerning the physical properties of a well from the surface to final depth. A critical function in data analysis is familiarity with the different sensors used for gathering surface data. The primary types of surface data sensors are discussed in this page.

Internet via GPRS/EDGE/3G/HSPA - Raspberry Pi blog. Application Pool Identities. Bringing VR to the Web with Google Cardboard and Three.js. Virtual reality is coming. You know that as a developer – you want in. The Oculus Rift, Gear VR, HTC Vive and more are making waves, yet many developers don’t realise just how much potential there is in the simplest of them all – Google Cardboard. Streaming a Raspberry Pi Camera Into VR With JavaScript. Networking - Force Raspberry to get internet from specific network.

18 Free eBooks on Robotics And Automation