The Semiconductor Market Is on Track to Increase 24% in 2021. Applied Materials - AME 8100 Batch Etcher. Toshio Maruyama - HoF. VLSIresearch. The business of technology is inseparable from the technology of the business. 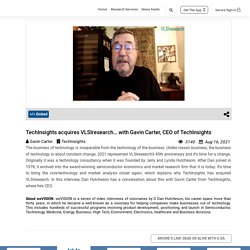 Unlike classic business, the business of technology is about constant change. 2021 represented VLSIresearch’s 45th anniversary and it’s time for a change. Originally it was a technology consultancy when it was founded by Jerry and Lynda Hutcheson. After Dan joined in 1978, it evolved into the award-winning semiconductor economics and market research firm that it is today. It’s time to bring the core-technology and market analysis closer again, which explains why TechInsights has acquired VLSIresearch. In this interview, Dan Hutcheson has a conversation about this with Gavin Carter from TechInsights, where he’s CEO. About weVISION: weVISION is a series of video interviews of visionaries by G Dan Hutcheson, his career spans more than thirty years, in which he became a well-known as a visionary for helping companies make businesses out of technology. 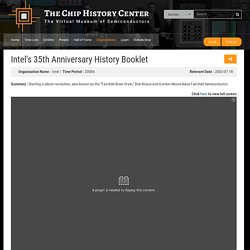 The IC weather warmed 2°F last week. Sales for all segments have been on fire since March. Semiconductor Bonding & Inspection Equipment. Summary : Bonding and inspection has historically been overlooked by upper management in semi­conductor companies.

Their attention has been drawn by the enormous capital re­quirements of wafer fabrication. However, this has been changing as the enormous ad­vances in the front end have driven dramat­ic need for change in bonding and inspec­tion equipment. The forces driving these changes are increasing die size, lead counts, device speed and finer pad pitches. With die becoming larger and lead counts incre ... See More. Introduction to Assembly Equipment - 1988 Edition. Summary : Assembly equipment consists of those types of equipment used to sep­arate the completed wafer into its individual dice and to assemble each die into its own package. 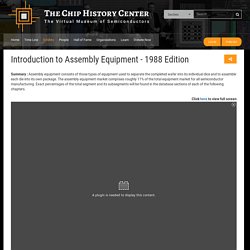 The assembly equipment market comprises roughly 11% of the total equipment market for all semiconductor manufacturing. Exact percen­tages of the total segment and its subsegments will be found in the database sections of each of the following chapters. An Intel Wafer Fab Cleanroom Circa 1980. This video shows what it was like to work in a state-of-art fab during the late seventies to early eighties. 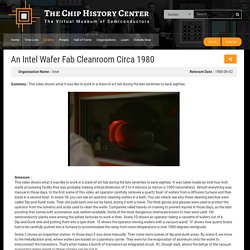 It was taken inside an Intel four-inch wafer processing facility that was probably making critical dimension of 3 to 4 microns (a micron is 1000 nanometers). Almost everything was manual in those days. In the first scene of this video, an operator carefully removes a quartz 'boat' of wafers from a diffusion furnace and then loads in a second boat. Semiconductor Analytics: Sales for All Segments Have Been Up. A History Timeline of Automatic Test Equipment. Jerry Hutcheson, VLSI Research's founder, was very active in the test side of th ... 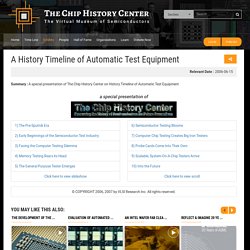 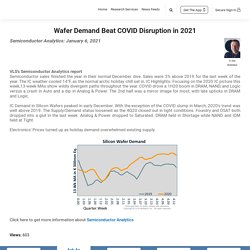 Sales were 3% above 2019 for the last week of the year. The IC weather cooled 14°F, as the normal arctic holiday chill set in. IC Highlights: Focusing on the 2020 IC picture this week,13-week MAs show wildly divergent paths throughout the year. COVID drove a 1H20 boom in DRAM, NAND, and Logic versus a crash in Auto and a dip in Analog & Power. What ATDF’s All About. Summary : Dave Anderson: General Manager, ATDF: What ATDF’s All About Annexure : ATDF provides wafer fabrication capability for customer development with IP protection, and rapid cycles of learning. 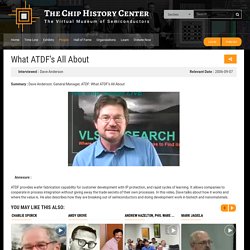 VLSIresearch. MILPITAS, Calif. — July 13, 2021 — Global sales of semiconductor manufacturing equipment by original equipment manufacturers are forecast to surpass $100 billion next year, a new high, after jumping 34% to $95.3 billion in 2021 compared to $71.1 billion in 2020, SEMI announced today in releasing its Mid-Year Total Semiconductor Equipment Forecast – OEM Perspective at the Innovation for a Transforming World virtual conference. 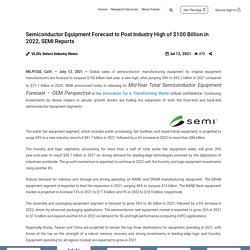 Continuing investments by device makers in secular growth drivers are fueling the expansion of both the front-end and back-end semiconductor equipment segments. The wafer fab equipment segment, which includes wafer processing, fab facilities, and mask/reticle equipment, is projected to surge 34% to a new industry record of $81.7 billion in 2021, followed by a 6% increase in 2022 to more than $86 billion. Robust demand for memory and storage are driving spending on NAND and DRAM manufacturing equipment. The 3 business integration models: Horizontal, Vertical, and Matrix. Summary : Of the three business integration models: Horizontal, Vertical, and Matrix, matrix is the most powerful but also the most difficult to execute... The matrix integration model is new. Samsung has built it. With it, Samsung has accomplished a major innovation in business infrastructure models.

It was with this selection that we learned Andy was a marketing and sales genius. In the middle of this, late one week, Intel was informed that they had just lost the design-in decision to Motorola. The started with the simple marketing game: get inside the customer's mind. Out of this came a simple derivation of Moore's law. Semiconductor Sales Closing in on a Record $600m Year. Introduction to Wafer Fabrication Equipment - 1988 Edition. Summary : Wafer fabrication equipment consists of all those types of equipment used in making and processing raw wafers in forming the finished chips-whether they be discretes or integrated circuits. This segment also includes mask making. However, by convention, it excludes both test and assembly of the finished product. VLSIresearch. KULICKE & SOFFA: WIRE BONDING ADVANCEMENT CIRCA 2006. Summary : Ever wonder how the nanochips you see in pictures wind up covered in plastic on a printed circuit board and how they connect nanometer scale lines to the big wires in the electronics you buy?

VLSI's Semiconductor Analytics Report Set New Sales Record. The invention of the IC, an Interview with T. Lee. Summary : The History of the invention of the Integrated Circuit. Why it wasn't so predictable. U.S. Semiconductor Stocks Hit by U.S. Corporate Tax Plans. Summaries:U.S. Semiconductor Stocks hit by U.S. corporate tax plans: President Biden's plans to raise corporate taxes from 21% to 28% look to be having collateral damage on America's semiconductor industry, as investors plan for the earnings hit by moving their money to non-US companies...This is a job for the SIA and SEMI to tackle.

VLSIinsiders' cloudside chat — May 19, 2021. When the death of Moore's Law was greatly exaggerated in the mid-90s and 2000s. Reminiscences from SEMICON. Moore’s Law GDP Value in the Economy. How R&D Has Been Accelerated By COVID19 with CEO of CEA-Leti. Emmanuel Sabonnadière of CEA-Leti has a conversation with Dan Hutcheson about how R&D needs have been accelerated by COVID-19, which is at the heart of how they help the world. We cover topics such as their QCL (Quantum Cascade Laser) and BCI (Brain Computer Interface) efforts at their R&D center, as well as power components, such as SiC and GaN.