4 Impactful Tech Advancements Of The Last Decade. The last 100 years in human history is known the world over as a time when technology progressed the most at an exponential level after the rise of the Industrial Revolution. 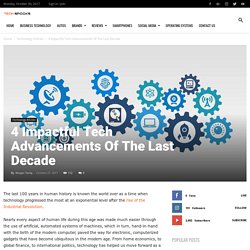 Nearly every aspect of human life during this age was made much easier through the use of artificial, automated systems of machines, which in turn, hand-in-hand with the birth of the modern computer, paved the way for electronic, computerized gadgets that have become ubiquitous in the modern age. Pixel 2 vs iPhone 8 vs Galaxy S8: what's the best smartphone right now? Why should I care about the Google Pixel 2? 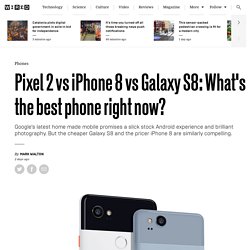 Since the Android operating system launched in 2008, Google has offered it out to other smartphone vendors for free. There are huge range of Android smartphones on the market, covering everything from cheap and cheerful phones like the Wileyfox Swift 2 X, through to high-end handsets like the Galaxy Note 8. Unfortunately, most smartphone makers modify Android to differentiate their devices from competitors'. The result is a confusing array of user experiences and slow software and security updates (a problem exacerbated by carrier networks). Google Pixel 2/Pixel 2 XL Specs Colours Kinda blue, Just black, Clearly white/Just Black, Black and White.

Clever Tips For Expanding Your Technology Business. Growing a business is often fraught with problems. 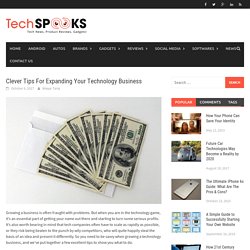 But when you are in the technology game, it’s an essential part of getting your name out there and starting to turn some serious profits. It’s also worth bearing in mind that tech companies often have to scale as rapidly as possible, or they risk being beaten to the punch by wily competitors, who will quite happily steal the basis of an idea and present it differently. So you need to be savvy when growing a technology business, and we’ve put together a few excellent tips to show you what to do. Set up on the cloud The cloud is evening up the playing field between small businesses and large corporations In days gone by, only big companies could afford the in-house servers and databases needed to serve a vast audience, but now the cloud is allowing a lot more flexibility. Samsung Galaxy Note 7: company to retrieve 157 tonnes of precious metal.

Getty Images / George Frey / Stringer Samsung's Galaxy Note 7 was an unmitigated disaster – but all is not lost. 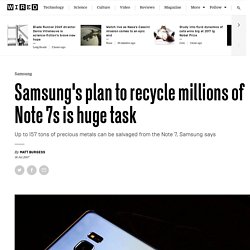 As well as reselling refurbished handsets, Samsung has also pledged to recycle or reuse 157 tonnes of gold, silver, cobalt and copper. A blue whale can weigh up to 200 tonnes, so that's a lot of metal. A Simple Guide To Making Big Business Decisions. Making decisions is tough at the best of times. 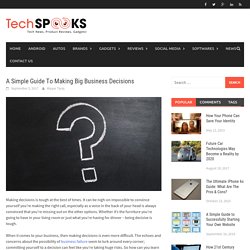 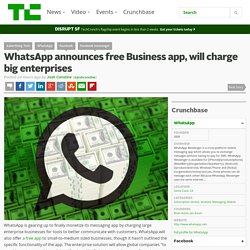 WhatsApp will also offer a free app to small-to-medium sized businesses, though it hasn’t outlined the specific functionality of the app. The enterprise solution will allow global companies “to provide customers with useful notifications like flight times, delivery confirmations, and other updates”. “We do intend on charging businesses in the future,” WhatsApp’s Chief Operating Officer Matt Idema told the Wall Street Journal. Mashable. Tesla made big news last month when it rolled out the Model 3, its first "affordable" car — and now, some of the automaker's more deluxe options are getting a little cheaper, too. 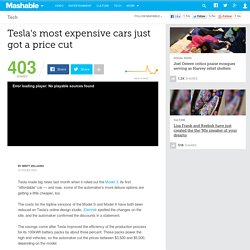 The costs for the topline versions of the Model S and Model X have both been reduced on Tesla's online design studio. A preview of the first wave of AR apps coming to iPhones. Over the past few weeks I’ve been steeping myself in the developer and investor community that is quickly sprouting up around ARKit. 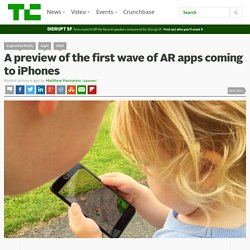 There are a variety of reasons that people are excited about the possibilities but it’s safe to say that the number one positive that’s shared by everyone is the sheer scale of possible customers that will be able to experience augmented reality on day one of iOS 11. Hundreds of millions of potential users before the year is out is a potent pitch. I’ve seen some very cool things from one- and two-person teams, and I’ve seen big corporate developers flex their muscle and get pumped about how capable AR can be. At a round robin demo event yesterday with a bunch of developers of AR apps and features, I got a nice cross-section of looks at possible AR applications. Samsung's Galaxy Note 8 comes with a 6.3-inch screen and dual camera - The Verge.

How do you recover from one of the most disastrous episodes in consumer electronics history? 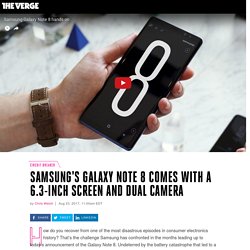 That’s the challenge Samsung has confronted in the months leading up to today’s announcement of the Galaxy Note 8. Walmart and Google partner on voice-based shopping. Walmart and Google are today announcing a new partnership that will enable voice shopping through Google Assistant, Google’s virtual assistant that lives on devices like its smart speaker, Google Home. 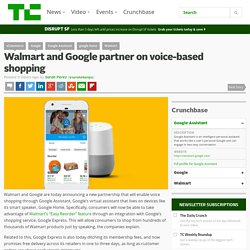 Specifically, consumers will now be able to take advantage of Walmart’s “Easy Reorder” feature through an integration with Google’s shopping service, Google Express. This will allow consumers to shop from hundreds of thousands of Walmart products just by speaking, the companies explain. Social Media Tips For Digital Marketers - Tech Spooks. Since its emergence in the early 2000’s, social media has continuously redefined the way us humans interact with each other.

From the way we communicate, how we work, enjoy our downtime, and more, it’s all affected by social media. How Technology Plays Such a Massive Role in the Corporate World - Tech Spooks. There are many things that play a huge role in the corporate world. And, when you’re trying to run your business you’ve got to make it as easy as you can. The best way of doing this is to embrace how technology is changing and developing, and understand how it can benefit the business world. Business on the Move. Microsoft Windows 8 Review - Tech Spooks. Microsoft Windows 8 is probably one of the biggest risk the software giant has taken in the history of computing. With the vision of unifying the experience on the desktop, tablet and phone, has the operating system lost its essence of desktop computing? Not really. Compatibility Windows 8 can be installed nearly on any device with the capability to run Windows 7. It requires a minimum of 1GHz processor supporting PAE, NX and SSE2, 2GB ram, 16GB hard disk space and a graphics card supporting DirectX 9.

Applications Support Windows 8 supports all legacy softwares. 64-bit version supports 64 and 32-bit legacy applications while 32-bit support 32-bit and 16-bit applications. Apple iPhone 5 – Review - Tech Spooks. Apple iPhone 5 is definitely lighter, thinner and faster than its predecessors. You will love its 4g capability, bigger screen and that better front-facing camera. This was perhaps the most anticipated Apple handset ever since the launch of iPhone 4. There were already temptations in the market for users, keeping them away from the pull of iOS with the superior Windows Phone interface or the Sony Xperia T. 5 Best Samsung Android Phones Today - Tech Spooks.

The Android Phones of Samsung are top quality phones which deliver premium performance, and the wide array of phones from Samsung makes sure that there is an Android phone for everyone. Samsung Galaxy S3 Arguably the best of the Samsung Android Phones is the Samsung Galaxy S3. It comes with a powerful Snapdragon S4 Pro 1.4GHz quad core processor and a generous 1GB RAM. The Samsung Galaxy S3 has a 4.8” SAMOLED display, carrying a 720×1280 resolution; with the dimensions of 70.6 x 136.6 x 8.6 mm, however you cannot complain with its weight which is just 133gm.

What To Look For In Graphic Design Software - Tech Spooks. Samsung Galaxy S4: The New Samsung Flagship Smartphone - Tech Spooks. While iOS users are passionate about iPhone 5 there are millions of Android users around the world that are in love with the Samsung flagship Galaxy smartphones that offer superior mobile experience. How to unlock Samsung Galaxy S7 - Tech Spooks. When it comes to smartphones, the rumor mill is constantly working, bringing new leaked images with upcoming devices more often than everybody expects. Use Effective Social Media For Your Business - Tech Spooks. Apple brings ad-blocker extensions to Safari on iPhones - Tech Spooks. Nokia and Xiaomi ink patent and equipment deal, Xiaomi buys Nokia patents. Top 10 Tech Gadgets You Can't Live Without - Ultimate Gadget List. Pokemon Go Review: The New Age Augmented Reality Game - Tech Spooks. In Business, The Right Technology Is The Backbone Of Your Success. Apple IOS Vs Android – What are the Pros And Cons.

Top 10 Tech Gadgets You Can't Live Without - Ultimate Gadget List. Easy Steps to Increase your Income by Using Latest Technology Methods. Picking the Right Tech Tools for the Job. Dissecting The Corpse Of A Failed Online Business. MWC 2017: Samsung unveils two new tablets but no phone. Mashable. Apple IOS Vs Android – The Pros And Cons - Tech Spooks. Simple Tactics To Improve Your Business's Digital Strategy. Project Management Then & Now. Sticky Business: How To Improve Customer Retention. Is Your Business Visibile? Starting Off With A New Gaming PC. How To Build Your Own Software. iPhone X (iPhone 8) News. Technologies To Give Your Freelance Career a Boost. 3 Important Questions To Ask When Buying A Security System. Watch What You Like, Wherever You Are. If you have a new MacBook Pro, you should update macOS right now. Xiaomi sold quarter of a million smartphones in just 10 minutes in this country. iPad Mini – Review. Apple iPhone 5 – Review.

Think Platform Gaming is Dead? Think Again. The Ultra-Portable Workstation: Tools to Make It Happen. Verizon won’t push Samsung’s Note 7 bricking update, but the other carriers will. Survey Reveals Users Keep Same Profile Picture for Years. PowerPoint Templates: Minute for a Masterpiece. How 21st Century Technology Shaping up the Businesses? Amazon expands its online gift shop “Interesting Finds,” adds human curation. Top 3 Mobile Phones. The Best Laptop Gadget Available. Apple is releasing a coffee table book about how awesome it is. What Should Technology Offer Your New Company In 2017? 3 Notorious Productivity Killers and How to Fight Them. Apple ditches iconic startup sound on new MacBook Pro. iPhone 7 Plus review: 2014 called – it wants its phablet back. Robots Don't Have Personal Problems: Is That Yet Another Reason They'll Take Your Job?

5 new things we've learned about the Nintendo Switch since its reveal. iPhone 7 and 7 Plus All Set For a Worldwide Release. How to Start And Maintain a Money-Making Blog. Yahoo Says Hackers Stole Data on 500 Million Users in 2014. 20 Ways to Build a Happy & More Productive Workforce. Why Your Business Must Put a Focus on Data. A Simple Guide to Successfully Starting Your Own Website. Three Technologies That Unexpectedly Changed How We Live. What Is The Best Way To Watch Television Today? What To Look For In Graphic Design Software. Independent Filmmakers Turn To Canon EOS Cameras For Quality Results. WIRED Awake: 10 must-read articles for August 12.

Pokémon Go: where does augmented reality go next? Facebook Messenger joins the 1 billion user club. Hire Professionals to Manage Your Website’s SEO. Pokemon Go Review: The New Age Augmented Reality Game. How to see if your apps know too much about you. BlackBerry Classic is being discontinued to make way for Android phones. The Useful Guide To Recover Lost Data. 20 of the best Android apps and games this month.

Twitter Eases 140 Characters Limit for Tweets. Top 6 Must Have OS X Apps that are Useful for Mac Users. Apple brings ad-blocker extensions to Safari on iPhones. WhatsApp bug could affect millions of users.