The big 5G push is not coming from phone makers or networks. We've heard various companies talk about 5G over the past few years with phone manufacturers, mobile networks and chipset firms all having a say on the next generation of connectivity - but there's a new driving force behind the technology. 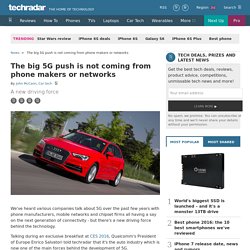 Talking during an exclusive breakfast at CES 2016, Qualcomm's President of Europe Enrico Salvatori told techradar that it's the auto industry which is now one of the main forces behind the development of 5G. "Auto research and development is one of the most active industries for developing 5G," Salvatori told us.

"They're looking at 5G to make wireless technology more reliable, robust and secure. " 5G will be able to provide better coverage and always on connectivity, meaning your vehicle will theoretically always be connected to a network which can be utilised for both infotainment and a wide range of safety features in the connected cities of the future. Smart car 5G is set for 2020 launch Article continues below. CES 2016: All the news live from Las Vegas. CES 2016 is in the books, but our coverage will continue as we bring you more hands-on reviews and videos from the show. 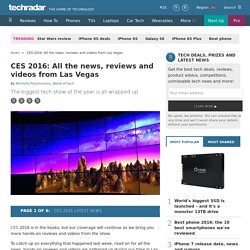 To catch up on everything that happened last week, read on for all the news, hands-on reviews and videos we gathered up during our time in Las Vegas. You can also head to pages 2 and 3 for all the news that landed in the days leading up to CES 2016.

CNET's Next Big Thing at CES asks: Is typing dead? Our devices are getting better, smarter and more capable, yet most of us are still interacting with them through some variation on the humble keyboard. 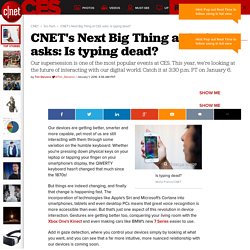 Whether you're pressing down physical keys on your laptop or tapping your finger on your smartphone's display, the QWERTY keyboard hasn't changed that much since the 1870s! But things are indeed changing, and finally that change is happening fast. The incorporation of technologies like Apple's Siri and Microsoft's Cortana into smartphones, tablets and even desktop PCs means that great voice recognition is more accessible than ever.

But that's just one aspect of this revolution in device interaction. Gestures are getting better too, conquering your living room with the Xbox One's Kinect and even making cars like BMW's new 7 Series easier to use. Add in gaze detection, where you control your devices simply by looking at what you want, and you can see that a far more intuitive, more nuanced relationship with our devices is coming soon. 7 tech trends that will rule CES 2016. A New Year means a new start, and that goes double for the tech world, since the first week of January is when International CES takes place. 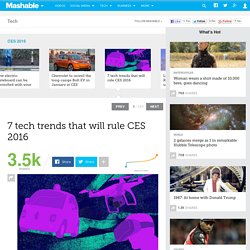 The biggest technology show in the world is set to begin Monday, Jan. 4, turning the Las Vegas Strip into a high-tech carnival for nearly a full week. Agenda - APPNATION VII @ CES. APPNATION is thrilled to welcome Scott Stanchak, Managing Director of Mobile Marketing for The New York Times. 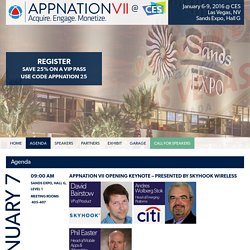 Scott leads a team accountable for growth, revenue and subscriptions across all mobile web and app properties, beta products (Crossword, Cooking, Now, etc.) and off-platform (Apple News, Facebook Instant, Flipboard, etc.). Prior to The Times, Scott directed mobile marketing and product strategy for Avis Budget Group and was also the founder of BakBurner Digital, LLC, which has released eight successful iOS and Android apps, including Winery Passport and Brewery Passport, the top wine and beer apps in their respective industries. We are thrilled to welcome a seasoned industry with such diverse experiences in the mobile, app and emerging platform space to our keynote stage. 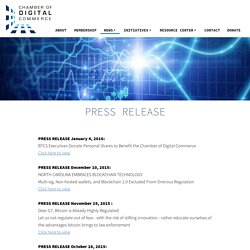 Introducing the Best of CES 2016 finalists! Our editors have been on the ground for the better part of this week scouring every nook and cranny in Las Vegas to bring you the latest and greatest from CES 2016. 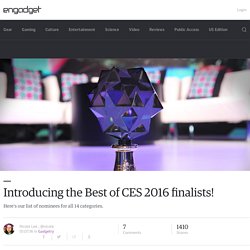 And now we're ready to announce to you our finalists for the official Best of CES awards. Below you'll find our selections for all 14 categories, which range from best wearables to the most innovative tech we've seen at the show. News - HP Study Finds Alarming Vulnerabilities with Internet of Things (IoT) Home Security Systems. PALO ALTO, Calif., February 10, 2015 — HP today released results of a security testingstudy revealing that owners of Internet-connected home security systems may not be the only ones monitoring their homes. 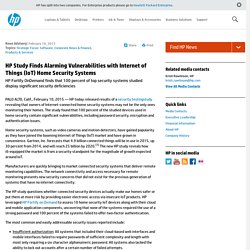 The study found that 100 percent of the studied devices used in home security contain significant vulnerabilities, including password security, encryption and authentication issues. Home security systems, such as video cameras and motion detectors, have gained popularity as they have joined the booming Internet of Things (IoT) market and have grown in convenience. Gartner, Inc. forecasts that 4.9 billion connected things will be in use in 2015, up 30 percent from 2014, and will reach 25 billion by 2020.(1) The new HP study reveals how ill-equipped the market is from a security standpoint for the magnitude of growth expected around IoT. Manufacturers are quickly bringing to market connected security systems that deliver remote monitoring capabilities.