How Android is Taking Over As The Leading OS for Enterprise?

Everything Enterprises Need To Know About Google's Mobile Operating System To Boost Productivity. How Every App Developer Helps Defend Android And iOS Against A Smartphone Revolution. Android vs. iOS vs. Windows Phone: Which is Best for Business? The best business smartphones have sharp displays, high-quality builds and long battery life. 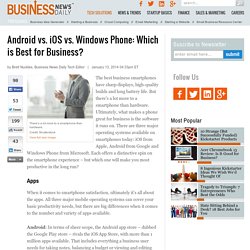 But there's a lot more to a smartphone than hardware. Ultimately, what makes a phone great for business is the software it runs on. There are three major operating systems available on smartphones today: iOS from Apple, Android from Google and Windows Phone from Microsoft. Each offers a distinctive spin on the smartphone experience – but which one will make you most productive in the long run? Apps When it comes to smartphone satisfaction, ultimately it's all about the apps. Android: In terms of sheer scope, the Android app store – dubbed the Google Play store – rivals the iOS App Store, with more than 1 million apps available. iOS:It's hard to top Apple's App Store when it comes to app support and availability. Features Baked into each mobile OS are unique features that will give business users a boost. Security iOS: Apple's iOS is a highly secure mobile operating system. Android 5.0 Lollipop: 7 Sweet Features for Business. Will the new Android hit your business's sweet spot? 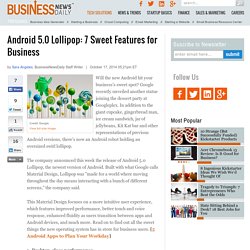 Google recently unveiled another statue joining the dessert party at Googleplex. In addition to the giant cupcake, gingerbread man, ice cream sandwich, jar of jellybeans, Kit Kat bar and other representations of previous Android versions, there's now an Android robot holding an oversized swirl lollipop. The company announced this week the release of Android 5.0 Lollipop, the newest version of Android. Built with what Google calls Material Design, Lollipop was "made for a world where moving throughout the day means interacting with a bunch of different screens," the company said. This Material Design focuses on a more intuitive user experience, which features improved performance, better touch and voice response, enhanced fluidity as users transition between apps and Android devices, and much more. 1.

Do you depend on Android to run your business and stay productive? 2. 3. No one likes having to charge their devices throughout the day. Why Google’s Android keeps dominating the smartphone OS market. Analyzing the key trends for mobile phone companies in 2Q14 (Part 1 of 15) By Puneet Sikka • Aug 29, 2014 12:39 pm EDT Android continues to dominate the smartphone operating system market In this series, we’ll discuss the latest key trends that are affecting the mobile phone industry. 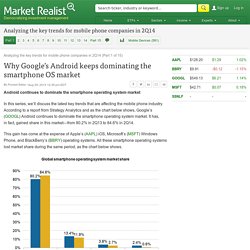 According to a report from Strategy Analytics and as the chart below shows, Google’s (GOOGL) Android continues to dominate the smartphone operating system market. It has, in fact, gained share in this market—from 80.2% in 2Q13 to 84.6% in 2Q14. This gain has come at the expense of Apple’s (AAPL) iOS, Microsoft’s (MSFT) Windows Phone, and BlackBerry’s (BBRY) operating systems. Enlarge Graph Google has taken a few initiatives to strengthen its position A couple of months back, Google introduced the enhanced version of Android’s operating system for smartphones, Android L. Developing Small Utility to Enterprise-Grade Solutions. The Android platform is the most widely used platform for smartphones today with a share of close to 50% globally as reported by Gartner. 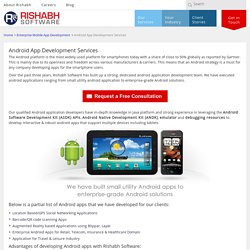 This is mainly due to its openness and freedom across various manufacturers & carriers. This means that an Android strategy is a must for any company developing apps for the smartphone users. Over the past three years, Rishabh Software has built up a strong, dedicated android application development team. How will Android’s new “Work” features affect enterprise mobility management? By Jack Madden It’s been almost two weeks since Google announced that the next version of Android will have a new set of enterprise mobility management frameworks called Android Work, intended for devices that get used for both work and personal functions. 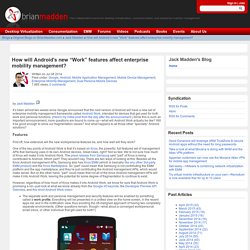 (Here's my initial post from the day after the announcement.) Since this is such an important announcement, more questions are bound to come up—what will Android Work actually be like? Will it be good enough to solve our fragmentation issues? And what happens to all those other “specialty” Android solutions? Features First off, how extensive will the new work/personal features be, and how well will they work? One of the key points of Android Work is that it’s based on Knox, the powerful, full-featured set of management APIs that Samsung uses in its own Android devices. The separate work and personal management and security features will be enabled by something called a work profile.