Conor Nolan sur Twitter : "15 Awesome Design Tools for Web or App Projects via @DesignMagTweets. Top UX & UI Tools and Resources That You Should Use. Guardian Tech sur Twitter : "#Apple's new #AppleWatch comes with a MICKEY MOUSE face. Apple Watch launch: a $10,000 luxury smartwatch – live. So, there we have it. 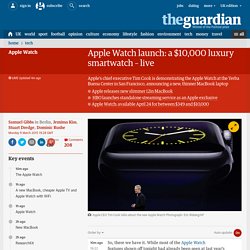 While most of the Apple Watch features shown off tonight had already been seen at last year’s unveiling, the key news was about availability and pricing. Pre-orders start on 10 April, with the device going on sale on 24 April in nine countries: Australia, Canada, China, France, Germany, Hong Kong, Japan, the UK and US. In the UK, the cheapest model will start at £299, the mid-tier “Watch” version will range from £479 to £949 depending what strap you choose, and the high-end Edition will start at [cough] £8,000. Other news: some figures on the “all-day” battery life of the device. AppleInsider sur Twitter : "Nearly 700,000 retailers accepting #Apple Pay across the U.S. #AppleWatchEvent... Tips: Find Family Friendly Videos For Kids With the YouTube Kids App. Because kids have access to browsers on many devices they can roam the internet which can result in kids seeing inappropriate content. 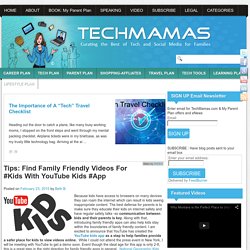 The best defense for parents is to make sure they educate their kids on internet safety and have regular safety talks -so communication between kids and their parents is key. Along with that, introducing family friendly apps can also help kids stay within the boundaries of family friendly content. I am excited to announce that YouTube has created the YouTube kids app as a step to help families provide a safer place for kids to view videos online. While I could not attend the press event in New York, I will be meeting with YouTube to get a demo soon. Event though the ideal age for this app is only 2-8, this is a great step in the right direction for family friendly apps in general. For now I wanted to share the information from the YouTube kids press release so parents can test it out for themselves: 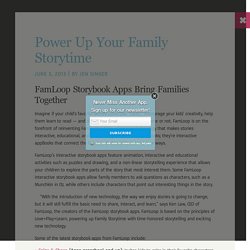 FamLoop is on the forefront of reinventing Family Storytime using new technology that makes stories interactive, educational, and entertaining. They’re not just ebooks; they’re interactive appBooks that connect the family in both traditional and new ways. FamLoop’s interactive storybook apps feature animation, interactive and educational activities such as puzzles and drawing, and a non-linear storytelling experience that allows your children to explore the parts of the story that most interest them. Some FamLoop interactive storybook apps allow family members to ask questions as characters, such as a Munchkin in Oz, while others include characters that point out interesting things in the story. Some of the latest storybook apps from FamLoop include: Winky Google Glass App Takes Pictures When You Blink. Google’s highly anticipated Glass eyewear has been in the hands of some lucky developers for only a little while, but we’re already … err seeing … some clever uses for the device starting to hit the Web. 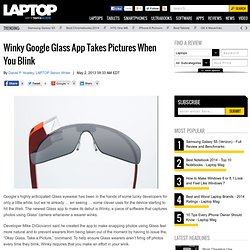 The newest Glass app to make its debut is Winky, a piece of software that captures photos using Glass’ camera whenever a wearer winks. Developer Mike DiGiovanni said he created the app to make snapping photos using Glass feel more natural and to prevent wearers from being taken out of the moment by having to issue the, “Okay Glass, Take a Picture,” command. Leave it to Disney to make the history of 44 Presidents (dare I say?) fun at Cool Mom Tech. Today’s Inauguration gives us a great opportunity to talk to the kids about the role of our President and some of the more interesting and colorful figures to have graced the Oval Office. 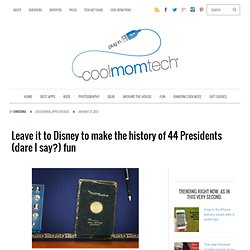 But, if you slept through history class as much as I did, you may also find it hard to remember the details and dates of all 44 presidencies. Which is where an incredibly smart app for the iPad will come in very handy. And, unlike my old history classes, there is no way the kids will sleep through this. Disney American Presidents app for the iPad takes you through the Unofficial Oval Office Scrapbook. Flip the cover and you’ll find a 2-page “spread” for each of the Presidents. Though the pages include all the important stuff—like the dates of their presidency, political party, and Vice President—-it’s the “fun stuff” that makes my kids laugh–and probably will help them remember the individuals better than rote memorization. Here’s The iPhone App A High School Student Built As His Application To Stanford. <div class="greet_block wpgb_cornered"><div class="greet_text"><div class="greet_image"><a href=" rel="nofollow"><img src=" alt="WP Greet Box icon"/></a></div>Hello there! 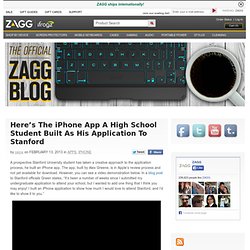 If you are new here, you might want to <a href=" rel="nofollow"><strong>subscribe to the RSS feed</strong></a> for updates on this topic. <div style="clear:both"></div><div class="greet_block_powered_by">Powered by <a href=" title="WP Greet Box WordPress Plugin" style="text-decoration:none;">WP Greet Box</a><a href=" title="WordPress Plugin" style="text-decoration:none;">WordPress Plugin</a></div><div style="clear:both"></div></div></div> A prospective Stanford University student has taken a creative approach to the application process, he built an iPhone app. 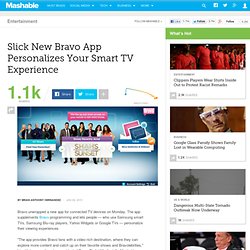 The app supplements Bravo programming and lets people — who use Samsung smart TVs, Samsung Blu-ray players, Yahoo Widgets or Google TVs — personalize their viewing experiences. Apple Event On for Oct 23: “Little More to Show” Us Likely iPad mini. The worst kept secret in the tech world is finally about to become real. 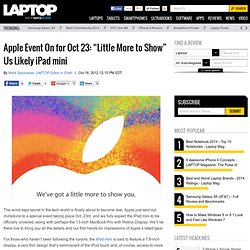 Apple just sent out invitations to a special event taking place Oct. 23rd, and we fully expect the iPad mini to be officially unveiled, along with perhaps the 13-inch MacBook Pro with Retina Display. We’ll be there live to bring you all the details and our first hands-on impressions of Apple’s latest gear. For those who haven’t been following the rumors, the iPad mini is said to feature a 7.8-inch display, a very thin design that’s reminiscent of the iPod touch and, of course, access to more than 250,000 apps.

We also expect to see the same Lightning connector that’s found on the iPhone 5 for charging and attaching accessories. There’s still debate as to whether Apple will offer the mini with 4G LTE , but in order to keep costs down we expect the device will be Wi-Fi only–at least to start. App Gets You Ready for Voting Day. You can't miss the fact that an election is coming. 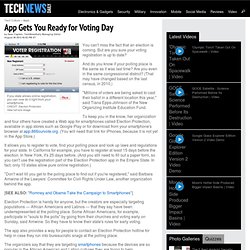 But are you sure your voting registration is up to date? And do you know if your polling place is the same as it was last time? Are you even in the same congressional district? (That may have changed based on the last census, in 2010.) "Millions of voters are being asked to cast their ballot in a different location this year," said Tiana Epps-Johnson of the New Organizing Institute Education Fund. To keep you in the know, her organization and four others have created a Web app for smartphones called Election Protection, available in app stores such as Google Play or for download from your smartphone's browser at app.866ourvote.org. It allows you to register to vote, find your polling place and look up laws and regulations for your state.

Hands-on with theBlu: Ocean Education App Helps You Explore the Deep. When we first heard about theBlu, we were confused as to exactly what it was. 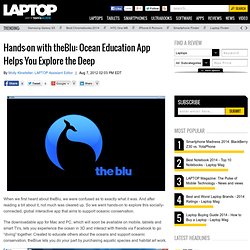 And after reading a bit about it, not much was cleared up. So we went hands-on to explore this socially-connected, global interactive app that aims to support oceanic conservation. The downloadable app for Mac and PC, which will soon be available on mobile, tablets and smart TVs, lets you experience the ocean in 3D and interact with friends via Facebook to go “diving” together. Created to educate others about the oceans and support oceanic conservation, theBlue lets you do your part by purchasing aquatic species and habitat art work. Getting Started To get started, we clicked the yellow Free Download button from our laptop on www.theblu.com.

Microsoft Office Spotted on the iPad, Expected to Drop into the App Store Soon. There are already other ways to get Microsoft Office on your iPad, but who can argue with an official version? Today, a report from The Daily claims that an iPad version of the Microsoft Office suite exists–and a staffer’s brief hands-on time with the product showed that it is a polished and capable app.

It comes as no surprise that Microsoft has developed the app; after all, the company has already shown willingness to develop for Apple’s slate, which is becoming a staple productivity tool among students and businessmen. On the Office for iPad app, you’ll supposedly be able to create Word, Excel and PowerPoint files and edit them both locally and online. Just like Microsoft’s other dedicated apps, Microsoft Office for iPad flaunts details of the Metro UI. A leaked picture of the app running on an iPad reveals a button to create a new document, as well as separate tiles for Word, Excel and Powerpoint docs. Toymakers gear up for year of the AppCessory. iTunes 10 Makeover: What Do YOU Think Of The New Logo? (PICTURES) In addition to redesigned iPods, the next generation of Apple TV, the new iOS 4.1 and the forthcoming iOS 4.2, Apple CEO Steve Jobs also announced an iTunes upgrade at the September 1 press event in San Francisco Wednesday. The latest version of iTunes, iTunes 10, includes a new layout and new organization options, Ping (Apple's social network for music), and a fresh logo.

Steve Jobs explained the new look during the press conference. "We thought it was appropriate that since we're about to surpass CD sales...it may be time to ditch the CD," he said, according to Engadget. Apple Announcement LIVE VIDEO: Streaming From September 2010 Apple Press Conference Available. iOS 4.1 Features Unveiled: See What's New. Apple unveiled the latest version of its iOS operating system, iOS 4.1, at a press conference Wednesday.

Apple CEO Steve Jobs highlighted four key features of iOS 4.1 First, the latest operating system for Apple's iOS devices has fixed several bugs that were present in iOS 4, such as issues with the proximity sensor, Bluetooth, and iPhone 3G performance. iOS 4.1 will also introduce a new feature, "High Dynamic Range" photos, that allows people to use their iPhone to take richer, more detail photos. The HDR feature will use take three photos in rapid succession--one at a normal exposure, one slightly underexposed, and one that is overexposed. The iOS device will then combine the three photos to produce an "HDR photo" that has more color and detail than a normal image (See an example below, via Engadget). New Apple TV Features Unveiled: See What's Different. SAN FRANCISCO — Apple Inc. is refining its plans to annex the living room into its entertainment empire.

Apple Introduces iTunes 10 With Ping. Apple TV (2010) first look / hands-on! Apple claims 50 percent of portable gaming market, iPod touch 'outsells Nintendo and Sony combined' iPod nano (2010) first hands-on! (update: video!) Here it is, the new (and completely redesigned) iPod nano. iPod nano vs touch vs shuffle... fight! Apple TV - Apple TV 2 introduced. iPod touch - iPod touch enters fourth generation with a bang. The iPod touch has long been touted to be an iPhone without the phone bit thrown in, but lately there has been accessories that turn it into an impromptu iPhone, although you would be better off getting the real thing.