Why is Spring Framework So Popular? 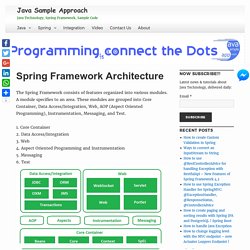 A module specifies to an area. These modules are grouped into Core Container, Data Access/Integration, Web, AOP (Aspect Oriented Programming), Instrumentation, Messaging, and Test. 1. Core Container 2. Data Access/Integration 3. Web 4. 1. Core is considered as the important parts of the framework which including the IoC and Dependency Injection features. Bean has BeanFactory – a complex implementation of the factory pattern. Context inherits its features from the Bean module, it supports internationalization (for example, resource bundles), event propagation, resource loading, and has a Servlet container.

Context has an central interface – ApplicationContext. SpEL is used for querying and manipulating an graph object at runtime. 2. JDBC has abstraction layer, so that you don’t need to code JDBC or parse database-vendor specific error codes. What are the advantages of spring framework? - Quora. The 7 Best Java Frameworks for 2016. There is no doubt that Java is one of the programming languages that is most in demand these days. 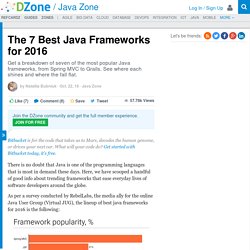 Here, we have scooped a handful of good info about trending frameworks that ease everyday lives of software developers around the globe. As per a survey conducted by RebelLabs, the media ally for the online Java User Group (Virtual JUG), the lineup of best java frameworks for 2016 is the following: Source: RebelLabs for Zero TurnAround Inc. We will not push you or make you jump to conclusions just based on the comparison chart below, but we'll present you with the overview of each concept, letting you analyze and contrast the differences and pick the perfect match depending on your project. 1.

Old but gold, Spring MVC is still ahead of the curve after more than a decade since its first release. Pros and Cons. What parts of Spring and Java EE are popular? There are many holy wars in software engineering. 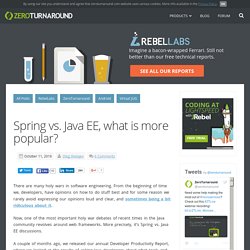 From the beginning of time we, developers, have opinions on how to do stuff best and for some reason we rarely avoid expressing our opinions loud and clear, and sometimes being a bit ridiculous about it. Now, one of the most important holy war debates of recent times in the Java community revolves around web frameworks.

More precisely, it’s Spring vs. Java EE discussions. A couple of months ago, we released our annual Developer Productivity Report, where we looked at the results of asking Java developers about what tools and technologies they use. We saw that both Spring and Java EE are pretty popular choices, and the general consensus is that both are quite excellent. Think about it, if someone uses servlets, do they use Java EE? 10 Best Spring Framework Features For Java Application Development - Mogul. Java has consistently been the most preferred programming language in the tech space. 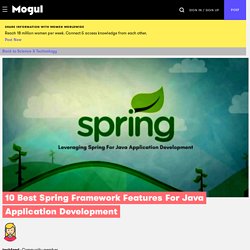 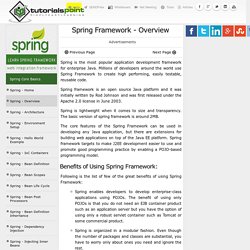 Millions of developers around the world use Spring Framework to create high performing, easily testable, reusable code. Spring framework is an open source Java platform and it was initially written by Rod Johnson and was first released under the Apache 2.0 license in June 2003. Spring is lightweight when it comes to size and transparency.