We write interesting tips, guides for expats in Budapest, Hungary.

The Future Is In Our Hands - Xpatloop.com - Expat Life In Budapest, Hungary - Technology. By Notebookspecialista: Early September saw one of the most prominent electronics fairs, IFA 2016, with a wide array of mind-blowing gadgets from leading manufacturers. 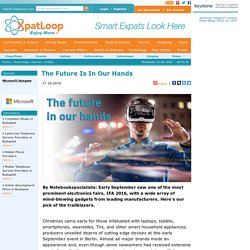 Here's our pick of the trailblazers. Christmas came early for those infatuated with laptops, tablets, smartphones, wearables, TVs, and other smart household appliances: producers unveiled dozens of cutting edge devices at this early September event in Berlin. Almost all major brands made an appearance and, even though some newcomers had received extensive word of mouth, there were some jaw-dropping revelations. We've selected some of those – not necessarily in the order of importance. Acer Predator 21 X Gamer notebooks already tend to cause a rift among consumers, with some ready to pay an arm and a leg for these machines, while others consider them a major extravagance. Acer Predator 21 X is the first notebook with a curved screen, fitted with a 2560x1680 resolution IPS panel. Lenovo Yoga Book ASUS ZenBook 3. What Kind Of Notebook Should I Choose? - Xpatloop.com - Expat Life In Budapest, Hungary - Technology.

By Notebookspecialista: You may think that choosing the right kind of portable computer is a breeze compared to assembling a desktop configuration, but there are still a lot of factors to take into account. 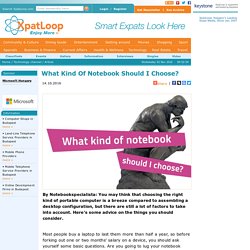 Here's some advice on the things you should consider. Most people buy a laptop to last them more than half a year, so before forking out one or two months' salary on a device, you should ask yourself some basic questions. Are you going to lug your notebook around all day, or is it going to sit on a desktop? Are you going to type into Notebook and draw in Paint, or would you like to run demanding office applications and, God forbid, the latest computer games? Disclaimer: Considering the various platforms would stretch the boundaries of such a brief guide so this time, we are only going to discuss notebooks running Windows.

What size should I go with? Even though it doesn't directly affect performance, you should make your call about size right at the beginning. A Few Tricks To Help Your Laptop Last Longer - Xpatloop.com - Expat Life In Budapest, Hungary - Technology. By Notebookspecialista.hu: We've all had our notebook's battery die on us at the worst possible moments. 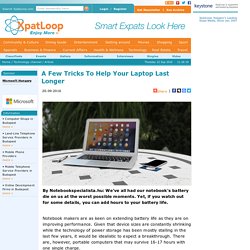 Yet, if you watch out for some details, you can add hours to your battery life. Notebook makers are as keen on extending battery life as they are on improving performance. Given that device sizes are constantly shrinking while the technology of power storage has been mostly stalling in the last few years, it would be idealistic to expect a breakthrough. There are, however, portable computers that may survive 16-17 hours with one single charge. It should also be noted that cell capacity will deteriorate over time, so if you don't want to be constantly hunting for wall outlets to plug in your device after just one or two years, you should follow some ground rules. Let's start with a few solutions for squeezing out some extra minutes of a battery on the brink of death.

First and foremost, turn on the energy-saving mode. One of the greatest consumers is evidently the display. How To Keep Your Laptop Clean By Notebookspecialista - Xpatloop.com - Expat Life In Budapest, Hungary - Technology. Besides making it look unattractive, the dust and dirt accumulating on your laptop may also radically affect its performance. 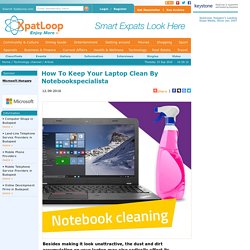 Fortunately, you don't have to turn to a professional every time you want to clean your beloved device. Hopefully, it goes without saying that you should keep that cup of coffee as far away from your brand new notebook as humanly possible. Shiny surfaces attract dust and fingerprints anyway, making regular cleaning inevitable – add some greasy fingers, crumbs and sticky fluids to that, and you'll need a superhero to restore the original, pristine state.

The Big Notebook Compromise - Xpatloop.com - Expat Life In Budapest, Hungary - Technology. By Notebookspecialista: When Mom has to choose the gamer notebook: When and how to compromise? 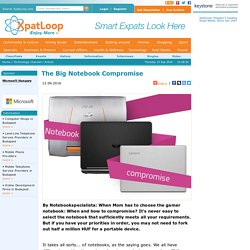 It's never easy to select the notebook that sufficiently meets all your requirements. But if you have your priorities in order, you may not need to fork out half a million HUF for a portable device. It takes all sorts... of notebooks, as the saying goes. We all have different considerations when choosing our laptop computers. If the kids were to decide how much to splash out on a new notebook, no model besides the ROG GX700 would ever sell. Hardcore gamer laptops still cost a fortune, and with the technology in rapid motion, new hardware and more powerful solutions are always available and always costly. Following these ground rules will help you find the best value for money: Besides wider displays, larger notebooks also come with more space for internal parts, which is essential for the video card, the component responsible for graphics performance.