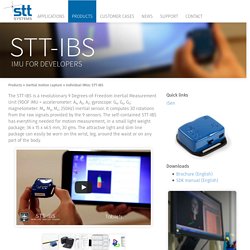 It computes 3D rotations from the raw signals provided by the 9 sensors. The self-contained STT-IBS has everything needed for motion measurement, in a small light weight package; 36 x 15 x 46.5 mm, 30 gms. The attractive light and slim line package can easily be worn on the wrist, leg, around the waist or on any part of the body. The STT-IBS can communicate wirelessly with either a laptop, a smartphone, a tablet, or with any Bluetooth-enabled host. This makes possible applications such as motion biofeedback or motion data logging with the sensor on your body, talking directly to a cell phone on your hip or a laptop on the desk. Specially designed straps improve the efficiency of preparation, reducing the time needed for subject setup.

The key features are: Manufacturer Details WorldViz. Entrepôt à louer à Diegem. Agence Bruxelloise pour l'Entreprise. Caputer-home. DIY USB rudder pedals. Ok the main idea is to have two pedals sliding back and forth and a pivoting bar between them that connects them. 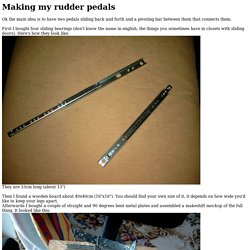 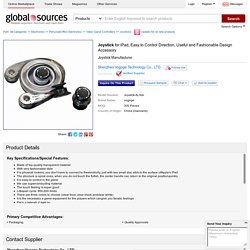 Popular Joystick with Gyro and G-sensor with Game Remote Control. Reliable exporters: find them and meet them Search Options. 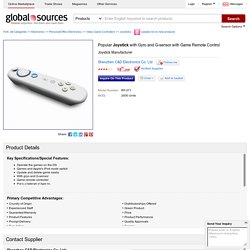 Logitech Joystick Review - ITF Gaming. Platform: iPad Review & Photography: Darryl Linington Tablets are becoming more and more popular when it comes to gaming these days; however, using the touchscreen controls can sometimes feel like your fingers are playing a game of twister, or practicing the age old art of contortionism. 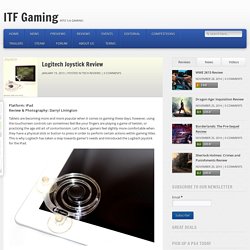 Let’s face it, gamers feel slightly more comfortable when they have a physical stick or button to press in order to perform certain actions within gaming titles. This is why Logitech has taken a step towards gamer’s needs and introduced the Logitech Joystick for the iPad. Mechatronics Group – Department of Mechanical Engineering. Nimble Sense: Bring Your Hands into Virtual Reality & Beyond by Nimble VR » Comments. Projects - www.cselley.com. Human Hoist. Ormesa Bug modular seating system. Special discounts available... 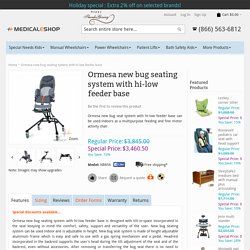 Ormesa new bug seating system with hi-low feeder base is designed with tilt-in-space incorporated in the seat keeping in mind the comfort, safety, support and versatility of the user. New bug seating system can be used indoor and is adjustable in height. New bug seat system is made of height adjustable aluminum frame which is easy and safe to use with a gas spring mechanism and a pedal. Headrest incorporated in the backrest supports the user's head during the tilt adjustment of the seat and of the backrest, even without accessories. After removing or transferring the bug seat there is no need to reposition the posture, adjustments can be made easily with one hand, continuously without jerks. 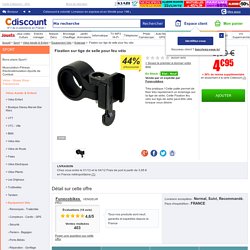 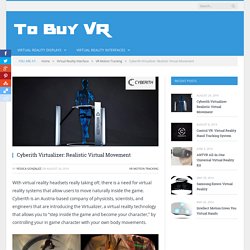 Cyberith is an Austria-based company of physicists, scientists, and engineers that are introducing the Virtualizer, a virtual reality technology that allows you to “step inside the game and become your character,” by controlling your in game character with your own body movements. Cyberith Virtualizer’s Movement Capability The Cyberith system provides complete movement freedom within the device. MYO Gesture Control Arm Band Uses Your Muscles for Computer Interface. Project PERCEPTION NEURON: Motion Capture, VR and VFX by Team PERCEPTION / NEURON » INSTANT STRETCH GOAL.

We know we are going to reach $450,000 or even $500,000 but we did not want to make you guys think we were going to make you wait for a stretch goal… So we are giving you an INSTANT STRETCH GOAL. 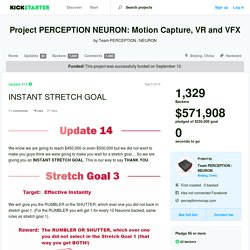 This is our way to say THANK YOU. We will give you the RUMBLER or the SHUTTER, which ever one you did not back in stretch goal 1. Www.vectionvr.com. Moon base. Sports seats for office and gaming. Joystick chair. Innovation House. The inspiration behind this project was to create an alternative controller to explore virtual environments, particularly to help increase the sense of immersion in that environment. 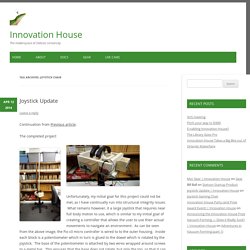 As an extended motivation, it can also be used by people who might not be able to easily use more traditional controllers, such as a keyboard and mouse, or a console controller. This chair builds off of the work by SparkFun, and their design of a joystick, which implements two potentiometers to collect analog data about the rotation about X and Y axis. Using XBee Modules (seen below), the chair will be able to send the movement data over a wireless network to the main computer using a Fio micro controller and an XBee USB Dongle (Nickels for scale because no one ever uses them). With this, the joystick housing for the chair still needs to be constructed.

It should look something like the following which is based on the joystick listed above: I will provide more updates once building begins. R C Joystick driven wheel chair. Office Furniture Scene. Office chairs don't look better than this. Not at this price anyway! The new Storm Chair combines a striking contemporary moulded frame design with full task chair functionality. There are no expensive price options - this chair has everything built in at a fantastic (introductory) price.

Usually delivered within 2 working days. RARE! Nintendo Super Chair: SOLD! Hiit and Kiix Wiimotes Use Motion Sensors. You might have always wondered what it is like to include leg movements in controlling video games. Though we usually use our wrists and fingers to play video games, it is very rare to find a controller that synchronizes both leg and hand movements. The Hiit and Kiix for Nintendo Wii do this job with the help of dual hand and feet motion sensors which allow you to play fighting games in a totally new way.

The Hiit comes with hand grips which can sense the motion and make appropriate control actions during gameplay. The Kiix can be strapped around the shoes and you could use that especially in games like kickboxing and show the world how cool it actually is to play games on Nintendo Wii. How To Use Your Wii Remote as a Gyroscopic Mouse. If you have a spare Nintendo Wii remote with the Motion Plus add-on, you can use it to control your Windows PC from across the room. Here’s how to get it working in a couple of easy steps. Using the Wii’s Motion Plus add-on and some software, you can easily control presentations or your home theater PC. One Handed FPS PS3 Controller.

Unbox & Review of Stinky video gaming footboard controller for FPS, MMO, RTS & MOBA. Wasdio - FPS PC Game Controller by Matterdaddy - Kickstarter Project. Occufit 150 Sit Stand Stools. Virtuix Omni gets new support - full crouching. Phosston wrote:So what does this mean for the Omni? That the "normal" version is clearly lacking and inferior? I always thought the policy was that moving parts are bad and whatnot...And how expensive can a moving support structure be, seeing that the Europeans are actually making it work in one device that's compact and if you trust their words, also affordable.

Time will tell I guess. Moving parts aren't bad, but they're expensive, and can add to the size and weight, which is why they weren't used. Inventor Professional Free Download. Utimate VR Gun prototype build. Endothermic wrote: I don't think a sliding/moving weight is a good idea. It will fee llike the gun is heavier when you move the weight further from your hand however it will also move the center of gravity and adversly affect you're ability to use the gun. Sure a heavier weapon should be harder/slower to aim then a lighter one but having the center of gravity at the end of the gun making it "seem" heavier will affect aiming differently then if the gun simply was that much heavier sicne the gun will always be trying to tilt down.

Imagine the weight sits above the handle in pistol mode and somewhere between the pistol-grip and the forward grip in rifle mode. Though this doesn't actually increase the total/perceived weight, it forces the user to adapt using the device in its intended mode, I think. Striker VR Brings Ultra-Realistic Recoil To Virtual Weaponry. Bridging the gaps that still remain in virtual reality once the visual and audio elements are at least ‘good enough’, VR enthusiasts will surely turn their attention to elements that are missing from their experience whilst trying to reach into these new virtual worlds.

It’s fairly clear that input development is still lagging some way behind the blindingly rapid progress made by VR Headsets in the last 2 years. Although E3 2014 gave us extremely positive experiences with Sixense’s STEM and Control VR’s VR Gloves, it does seem as if we’re moving in the right direction. Haptics are tied to input but often seen as disposable. Haptic technology, speaking broadly, transfers feedback via physical movement. 対物ライフル型スリングショットを作ってみた slingshot. 孤独な社会人の一人遊び 工作. 【FPS】銃型FPSコントローラーを作ってみた〜解説編〜【COD MW3】 Independent Weapon Tracking: Setup Guide. Most of my videos have almost exclusively featured independent head and weapon tracking, and while this isn’t technically a requirement to play with the mod, it’s definitely the most fun and immersive way to play through the mod.

This guide will take you all the way from “that video looks interesting” to playing it yourself if you’re willing to buy the necessary components. This tutorial does make the assumption that you have an Oculus Rift as your HMD which should work out of the box with the mod for head tracking. Don’t let the length of this deter you, once you have everything initially set up, the actual process of playing the game is as simple as pushing the button on the controller, starting the game and putting on your rift. The Hardware. Flexible Action and Articulated Skeleton Toolkit (FAAST) Inc. Immersive Game Makes You Duck and Dodge IRL. FOVE Uses Eye Tracking To Make Virtual Reality More Immersive. FOVE wants to ramp up by the virtual reality experience by creating the world’s first consumer-oriented headmount display to use eye tracking.

AUgemented Reality. About This Blog. Input - Is it possible to detect two different mice at the same time, and have their movements recorded seperately. DYS. Oliver Kreylos' Research and Development Homepage - Wiimote Hacking. Www.birl.ethz.ch/research/publications/publication/thesis/DEugster2012.pdf. Grouplab.cpsc.ucalgary.ca/grouplab/uploads/Publications/Publications/2002-SdgToolkitPoster.CSCW.pdf. Just a couple of kids tryin' to make it on their own. Positioning 3d Tracker.