The world's most secure smartphones - and why they're all Androids. Smartphones may be our most personal devices -- we carry them everywhere, and they know more about our lives than our closest friends -- but they were never designed with security or privacy in mind. 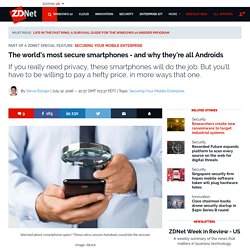 The apps we download harvest too much data (like the flashlight app that needs access to your contacts book) and the handsets themselves are just as vulnerable to hackers and malware as PCs, but harder to protect. There have been a few attempts to tighten up smartphone security -- witness the recent introduction of end-to-end encryption on some widely-used messaging apps. But if you're really paranoid, or if they really are out to get you, then you're going to need something more. Enter a small set of companies, ranging from startups to industry giants, offering smartphones designed to counter the efforts of business rivals or government agencies to snoop on your communications. These secure smartphones come at a price -- often an eye-watering one. The problem with smartphone security. Mobile security: iOS 8 vs. Android 5 vs. BlackBerry vs. Windows Phone. Android or iOS: which operating system is the most secure for mobiles? - Panda Security Mediacenter.

Following the recent XcodeGhost attack on the Apple Store in China, the eternal debate has reignited: iOS or Android? 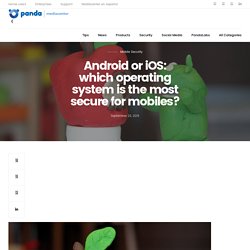 This is the dilemma that you face when it comes to choosing which mobile device to purchase and it goes far beyond just preferences regarding the camera or types of apps that are available to download. Whichever of the two that you choose could spell the difference between keeping your confidential information, and that of your company and employees, out of the cybercriminals’ grasp. To make your decision a little easier, we’ve analyzed the main strengths and weaknesses of both operating systems in terms of security. Of course, neither of the pair is perfect, but each one has an area where they excel compared to the other. Pros and cons of iOS Among the advantages of Apple’s operating system, you have the fact that it is a closed system and, therefore, automatically secure (well, as much as it can be). Pros and cons of Android. Tech Feed - Which Is the Most Secure Mobile OS Android iOS or Windows Phone. Security is always of paramount importance when it comes to mobile apps being used in enterprises. 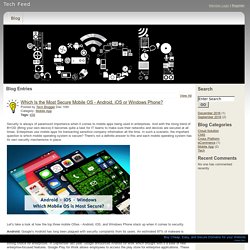 And with the rising trend of BYOD (Bring your own device) it becomes quite a task for IT teams to make sure their networks and devices are secured at all times. Enterprises use mobile apps for transacting sensitive company information all the time. In such a scenario, the important question is which mobile operating system is secure? There's not a definite answer to this and each mobile operating system has its own security mechanisms in place. Let's take a look at how the top three mobile OSes - Android, iOS, and Windows Phone stack up when it comes to security. Android: Google's Android has long been plagued with security complaints from its users. iOS: iOS has long been the preferred choice for enterprises looking for a secure mobile app. Windows Phone: Microsoft products are always loved by enterprises and adopted in huge numbers. Mobile Operating Systems (Mobile OS) Explained by Webopedia.com.

Updated February 01, 2017 / Posted August 10, 2011 By Vangie Beal Much like the Linux or Windows operating system controls your desktop or laptop computer, a mobile operating system is the software platform on top of which other programs can run on mobile devices. 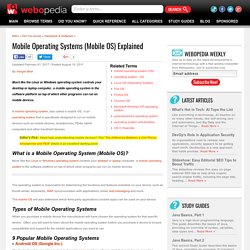 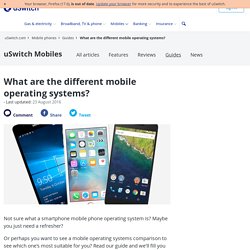 Maybe you just need a refresher? Or perhaps you want to see a mobile operating systems comparison to see which one's most suitable for you? Read our guide and we'll fill you in. What is a mobile phone operating system? Gone are the days when mobile phones were just a device to make phone calls and send occasional texts. Modern smartphones are closer to handheld computers that enable us to send emails, play games, watch the news and make video calls to loved ones. Operating systems, also known as mobile OS, are the software that run our desktop computers and laptops and manage their resources and memory when they're being used for multi-tasking.

Top 5 Mobile Operating Systems // 2017. Look at this chart, it shows some useful insights that explain how different mobile operating systems are getting popularity and acquiring market for the period of Jan 2011 to Jan 2016. 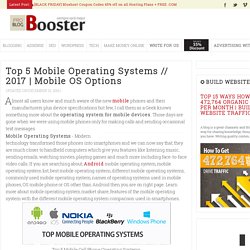 Stats are provided by Statcounter. Recently we have seen how to track smartphone if get lost. But today we are going to learn more about the operating systems used in smartphones. What is the Mobile Operating System? A mobile OS coming into the picture when the starting up of your smartphone gets powered ON. Types of Mobile OS & their Manufacturers While shopping a new mobile you always look for manufacturers, but the smart phone with the smart operating system makes the smart combination to buy.