The American Presidents—Washington to Lincoln. President’s Day is one of those weird American holidays where no one quite knows why it’s there or what it is, but it’s a day off so no one asks too many questions. 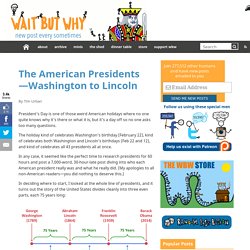 The holiday kind of celebrates Washington’s birthday (February 22), kind of celebrates both Washington and Lincoln’s birthdays (Feb 22 and 12), and kind of celebrates all 43 presidents all at once. In any case, it seemed like the perfect time to research presidents for 60 hours and post a 7,000-word, 30-hour-late post diving into who each American president really was and what he really did. (My apologies to all non-American readers—you did nothing to deserve this.) In deciding where to start, I looked at the whole line of presidents, and it turns out the story of the United States divides cleanly into three even parts, each 75 years long: Before we get started, eight general thoughts I had during my research: Desks in Rows. Flintstones House. Distance Learning India. BeautifulHut. How Does Internet Connectivity Reach Remote Areas?

There are just over two billion people in the world using the Internet, which is roughly a third of the population. 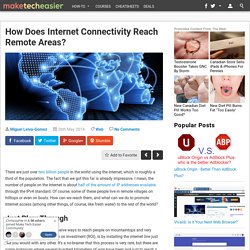 The fact that we got this far is already impressive. I mean, the number of people on the Internet is about half of the amount of IP addresses available through the IPv4 standard. Of course, some of these people live in remote villages on hilltops or even on boats. How can we reach them, and what can we do to promote Internet access (among other things, of course, like fresh water) to the rest of the world? Perhaps one of the most expensive ways to reach people on mountaintops and very remote areas, in terms of return on investment (ROI), is by installing the internet line just like you would with any other. Paint-on Processors and Nanotechnology. Intelligent paint turns roads pink in icy conditions - tech - 04 April 2008. When temperatures drop, it can be tricky to judge road conditions accurately. 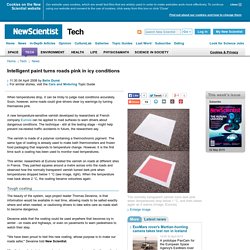 Soon, however, some roads could give drivers clear icy warnings by turning themselves pink. A new temperature-sensitive varnish developed by researchers at French company Eurovia can be applied to road surfaces to warn drivers about dangerous conditions. The technique - still at the testing stage - might help prevent ice-related traffic accidents in future, the researchers say. Dn13592-1_500.jpg (JPEG Image, 500 × 677 pixels) From Holland, Bright Ideas for Highways. Pressure%20and%20Temperature%20Sensitive%20Paint.pdf. New paint promises high-speed Wi-Fi shielding. IT managers should start familiarising themselves with a new security tool, the paint brush, as Japanese researchers have come up with a paint that they say will block high-speed wireless signals, giving businesses a cheap option to protect their wireless networks. 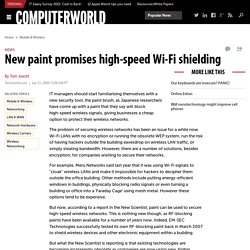 The problem of securing wireless networks has been an issue for a while now. Wi-Fi LANs with no encryption or running the obsolete WEP system, run the risk of having hackers outside the building eavesdrop on wireless LAN traffic, or simply stealing bandwidth. However, there are a number of solutions, besides encryption, for companies wishing to secure their networks. Teaching with Smart Wall Paint. The Deaf Society teaching creatively with Smart Wall Paint. Welcome! Product Life Cycle. Bare Conductive Paint. Making A Touch Sensitive Circuit with Bare Paint. j3.pdf. Telco Systems lays groundwork for fewer management worries with virtual routers, firewalls. Hosted service vendor Telco Systems is hoping to make it easier for businesses to buy cloud-based routers and firewalls, but the company first has to convince service providers it's a good idea. 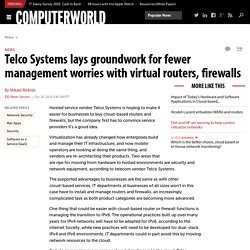 Virtualization has already changed how enterprises build and manage their IT infrastructure, and now mobile operators are looking at doing the same thing, and vendors are re-architecting their products. Two areas that are ripe for moving from hardware to hosted environments are security and network equipment, according to telecom vendor Telco Systems.

Design space exploration on heterogeneous network-on-chip. Agave_LM.pdf. NZNOG 2015: Virtual routers have a niche, but it IS a niche. Tim Nagy from Juniper presented on the virtual router model. 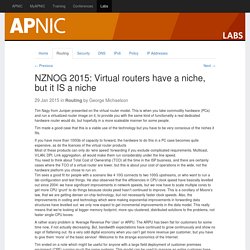 This is when you take commodity hardware (PCs) and run a virtualized router image on it, to provide you with the same kind of functionality a real dedicated hardware router would do, but hopefully in a more scaleable manner for some people. Tim made a good case that this is a viable use of the technology but you have to be very conscious of the niches it fits. If you have more than 100Gb of capacity to forward, the hardware to do this in a PC case becomes quite expensive, as do the licences of the virtual router products Most of these products can only do ‘wire speed’ forwarding if you exclude complicated requirements.

Multicast, V/LAN, DPI, Link aggregation, all would make them run considerably under the line speed. A rather scary problem is ‘Average Revenue Per User’ or ARPU. Tim ended on a note which might be useful for anyone with a large field deployment of customer premises equipment (CPE) running much the same systems. GoogleX to circle the Earth with Internet-connected balloons. Google is looking to launch a fleet of high-altitude balloons that will circle the planet, providing Internet connectivity to remote areas -- and it plans to do so within a year. 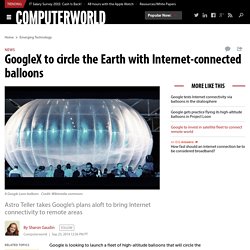 That's the plan that Astro Teller, head of Google's secretive "moonshot factory" GoogleX, told an audience at MIT Technology Review's EmTech conference in Cambridge today. The effort - known as Project Loon -- should prove to be a good way to get wireless Internet access to billions of people who don't have it today, according to a report in MIT Technology Review. The Review also noted that Teller said Google should soon have enough balloons to prove that the project, which is focused on connecting cell phone users, is feasible. "In the next year or so, we should have a semi-permanent ring of balloons somewhere in the Southern Hemisphere," he said. Google, working with local cellular providers, has been testing balloon-powered Internet access for more than a year now.

The company is tackling a huge problem. Do you see yourself driving here while connected? Do you Agree? Please share your resources/links/ideas here. EmTech: Google’s Astro Teller Says Its “Loon" Balloons Will Ring the Globe in 2015. Within a year, Google is aiming to have a continuous ring of high-altitude balloons in the Southern Hemisphere capable of providing wireless Internet service to cell phones on the ground. 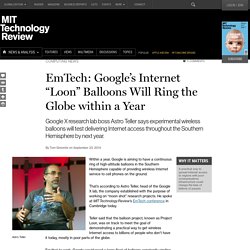 That’s according to Astro Teller, head of the Google X lab, the company established with the purpose of working on “moon shot” research projects. He spoke at MIT Technology Review’s EmTech conference in Cambridge today. Image Segmentation circa 1993.