Slavenka ili o boli (Slavenka or About the Pain) PROSVETITELJSTVO - VIDEO. Lasting Relationships Rely On 2 Traits. Every day in June, the most popular wedding month of the year, about 13,000 American couples will say “I do,” committing to a lifelong relationship that will be full of friendship, joy, and love that will carry them forward to their final days on this earth. 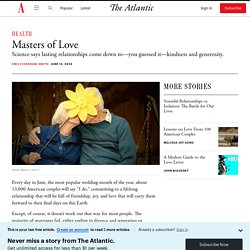 Except, of course, it doesn’t work out that way for most people. The majority of marriages fail, either ending in divorce and separation or devolving into bitterness and dysfunction. Of all the people who get married, only three in ten remain in healthy, happy marriages, as psychologist Ty Tashiro points out in his book The Science of Happily Ever After, which was published earlier this year. Social scientists first started studying marriages by observing them in action in the 1970s in response to a crisis: Married couples were divorcing at unprecedented rates. Psychologist John Gottman was one of those researchers. Novi Zeland: Zemlja dugog bijelog oblaka. Wu Wei – Doing Nothing 無爲. Views: 9325 Wu wei means – in Chinese – non-doing or ‘doing nothing’. 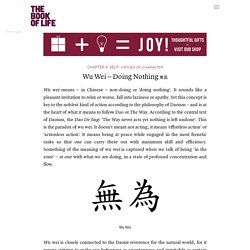 It sounds like a pleasant invitation to relax or worse, fall into laziness or apathy. Yet this concept is key to the noblest kind of action according to the philosophy of Daoism – and is at the heart of what it means to follow Dao or The Way. Cultural Differences Are More Complicated than What Country You’re From. Oleg Mastruko. What Is Love? Famous Definitions from 400 Years of Literary History. After those collections of notable definitions of art, science, and philosophy, what better way to start a new year than with a selection of poetic definitions of a peculiar phenomenon that is at once more amorphous than art, more single-minded than science, and more philosophical than philosophy itself? 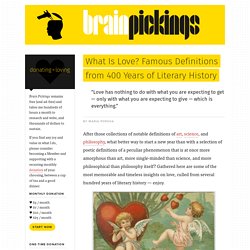 Beloved Poet and Philosopher Kahlil Gibran on the Seeming Self vs. the Authentic Self and the Liberating Madness of Casting Our Masks Aside. How the Universe Works: Stephen Hawking’s Theory of Everything, Animated in 150 Seconds. By Maria Popova Legendary theoretical physicist and cosmologist Stephen Hawking is among the greatest scientific minds in human history. 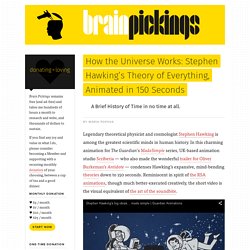 Contemporary Art’s Most Influential Cities. St Patrick's Festival 2016. David Bowie Answers the Famous Proust Questionnaire. In the 1880s, long before he claimed his status as one of the greatest authors of all time, teenage Marcel Proust (July 10, 1871–November 18, 1922) filled out an English-language questionnaire given to him by his friend Antoinette, the daughter of France’s then-president, as part of her “confession album” — a Victorian version of today’s popular personality tests, designed to reveal the answerer’s tastes, aspirations, and sensibility in a series of simple questions. 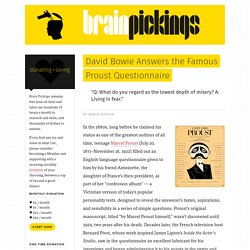 Proust’s original manuscript, titled “by Marcel Proust himself,” wasn’t discovered until 1924, two years after his death. Decades later, the French television host Bernard Pivot, whose work inspired James Lipton’s Inside the Actor’s Studio, saw in the questionnaire an excellent lubricant for his interviews and began administering it to his guests in the 1970s and 1980s. What is your idea of perfect happiness? Brussels versus Paris? No contest. The big misconception about Brussels is that its streets are nondescript and littered with EU bureaucrats. 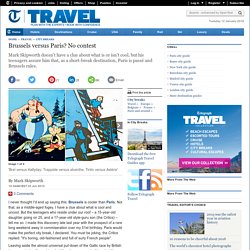 It's actually an old city of melancholic charm – Charles V, the Spanish Hapsburg emperor who ruled a quarter of the globe in the 16th century, was born there; it's bursting with art nouveau buildings, crowned by the World Heritage town houses of Victor Horta, and glories in the gilded exuberance of the Grand-Place, one of the finest squares in the world. The EU district, which we were careful to avoid, is miles away from the centre.

I don't believe the Critics really registered that the Belgian capital they encountered and the "Brussels" of Euro-sceptic myth are one and the same place. The seediness of large parts of the city is, for me, one of its biggest attractions. An Introduction to the World of Haruki Murakami Through Documentaries, Stories, Animation, Music Playlists & More. Some of you may wonder what inspires such devotion among the fans of Haruki Murakami, the world’s most internationally popular novelist. 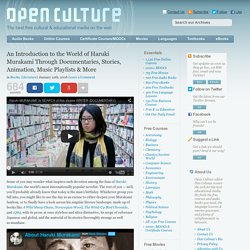 The rest of you — well, you’ll probably already know that today is the man’s birthday. Whichever group you fall into, you might like to use the day as an excuse to either deepen your Murakami fandom, or to finally have a look across his singular literary landscape, made up of books like A Wild Sheep Chase, Norwegian Wood, The Wind-Up Bird Chronicle, and 1Q84, with its prose at once styleless and ultra-distinctive, its scope of reference Japanese and global, and the material of its stories thoroughly strange as well as mundane. Haruki Murakami: In Search of this Elusive Writer, the BBC documentary at the top of the post, provides a fine introduction to Murakami, his work, and the fans who love it. A Philosophical Conversation with David Bowie. The business of being David Bowie. Last updated 08:25, January 12 2016 Supplied Always an innovator, it was appropriate that David Bowie chose to play fellow visionary Nikola Tesla in Christopher Nolan's 2006 film The Prestige. 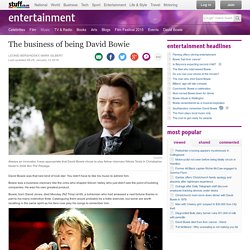 David Bowie was that rare kind of rock star: You didn't have to like his music to admire him. Bowie was a business visionary like the ones who shaped Silicon Valley who just didn't see the point of building companies: He was his own greatest product. Ireland 2016: No country for young people. Laura Duggan is 27 years old and works for a web design agency. 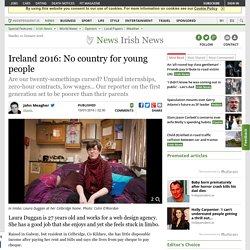 She has a good job that she enjoys and yet she feels stuck in limbo. Raised in Galway, but resident in Celbridge, Co Kildare, she has little disposable income after paying her rent and bills and says she lives from pay cheque to pay cheque. She has applied for bank loans on a number of occasions but has been declined every time. She has never been granted an overdraft to her account. She has no pension and even though she lives as frugally as she can manage, it's a rare month when she can afford to save money.

"I can't imagine ever being in the position to buy a house," she says. Preminuo jezikoslovac Bulcsú László. Bruxelles Grand-Place. Our Culture of Waste: Why We Should Stop Wasting (and How To Prevent Waste) (Riding on last week’s post on reasons why people are fat, inspired by my recent travels in the U.S., today’s post is about waste and how to prevent it. 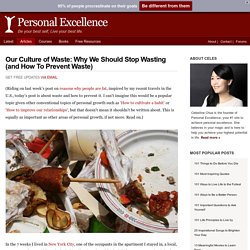 I can’t imagine this would be a popular topic given other conventional topics of personal growth such as ‘How to cultivate a habit‘ or ‘How to improve our relationships‘, but that doesn’t mean it shouldn’t be written about. This is equally as important as other areas of personal growth, if not more. Read on.) [Manifesto] How To Prevent Waste Manifesto.

Last year, I was in the U.S. and was inspired to write an article on how to prevent waste after experiencing first hand how wasteful the U.S. culture can be. Today, I bring you the manifesto version of How To Prevent Waste: (Click image for larger version) Global novine. NAKON DOKTORATA NA PRESTIŽNOM MIT-u ODLUČILA SE VRATITI U RH Nakon dvije godine iskreno progovorila o minusima koji koče razvoj i povratak mladih. Dr. sc. Tea Žakula, dipl.ing., bivša je studentica Fakulteta strojarstva i brodogradnje, s doktoratom prestižnog američkog sveučilišta MIT (Massachusetts Institute of Technology). Otišla s obitelji u Irsku: Voljena zemlja me iskoristila, ispljunula, pregazila i ismijala. My 18 Current Favorite Restaurants in Europe. As I buried my face into the piping hot crêpe, I couldn’t help but realize how much I eat when I visit Europe.

After gorging on Nutella, cheese, sausage, beer, pasta, goulash, or whatever else is put in front of me as I traverse the continent every summer, my bikini body needs some work. Europe has just too many world-class places to eat, drink, and be merry! But, as I took that second bite, I thought, “Screw it. Bring me a second crêpe. 11 utterly decadent Irish treats for your Dessert Bucket List. THE YEAR 2016 is coming up fast. January and February are looming. And what we all need is a handy list of incredible desserts to motivate ourselves through the bleak midwinter.

Read this, pin it to your wall, cross off the ones you’ve had. 1. Best Party Destinations Around The World - Journalist On The Run. With New Years Eve fast approaching and many people already starting to make plans for 2016, I decided it was time for a post on the best party destinations around the world. Instead of writing my own list, however, I reached out to some of the best up-and-coming travel blogger to see what they had to say.

Who better to tell us where to party than travel experts who write about these places ever day. O PREDNOSTIMA I NEDOSTACIMA HRVATSKE Ivan Đikić komentirao i mandatara povratnika. Richard Lewis Communications - Specialising in languages, communication skills & cross-culture. Hans and Ola Rosling: How not to be ignorant about the world. The ‘stupidifation’ of our societies and failure of universities. Cultural linguistic mediation (Introduction) The phenomenon of migrations is transforming Italy into a multicultural Country, where persons of different languages, religious backgrounds and cultures live together side by side. To know the other person's historical, cultural and religious background is certainly one of the fundamental aspects towards a realisation of a harmonious cohabitation and for better management of the immigration phenomenon.

Cultural Mediation appeared and asserted itself in Italy only recently, on the basis of experiences already begun in other European Countries, thanks both to overcoming of an original vision in terms of emergency in approaching the migratory phenomenon, and to overall political choices favouring integration of the immigrated population. Richard Dawkins, Philip Pullman, Robin Ince, Dan Snow And More Reveal Their Very Atheist Christmas Plans. Christmas isn't just for Christians.

Vedrana Miholić-programerka s pregršt interesa i postignuća. Ivana Matić | 14, stu. 2014. If You're on a Budget, This is When You Should Travel - Travelzoo. 56 things to love about Europe from 56 travel bloggers - Jusz Travel. Europe is one of the most popular continent for travelers to visit. Keith Wilson. Newgrange Stone Age Passage Tomb - Boyne Valley, Ireland. R�is�n murphy. Bob Dylan - Corrina Corrina (Freewheelin' Alternate Take 1962 - Acoustic Take 1)

The Celtic Lyrics Collection - Lyrics - The Old Triangle. Norway is the best place to live in the world, according to the UN. Once again, Norway has been voted the best country in the world for humans. Do 300 eura mjesečno, priča se o nacionalizmu, kad plata pređe 500 - o garderobi i kafani, nakon 3 000 - vremenska prognoza i ljubav! Ireland has been named in the top 10 places to live in the world. Desktop computer vs. Laptop computer. Wireless headphones. The Red Drum Getaway. VIDEO: MLADI BLOGER POKAZAO KAKO JE LAKO USREĆITI LJUDE Potpunim strancima upućivao pozitivne poruke i bilježio njihove reakcije. Places to experience a real British Christmas. 15 Things Every Woman Should do By 40. No matter what they say, it’s still Africa! Cairo: Finding the city behind the headlines. Expat lives: Lebanon to Egypt. Living in Egypt. 13 Signs You're an Expat in Egypt - Ministry of British Comedy - All your favourite British Comedies clips, articles and more in the one spot. Come share your love of British Comedy with us.

Monufia Governorate. Weather forecast for Minūf, Al Minufiyah (Egypt) #SantaAbseil. 8 days to go! Christmas Markets around Europe in 2015! 20 Magically Festive Things To Do In Dublin In The Lead Up To Christmas. The Top 10 Cosiest Pubs In Dublin For The Winter Season. SECONDARY INTEGRATED PROGRAMS. The Lyric Feature Friday 4 December 2015 - The Lyric Feature - RTÉ lyric fm. Dublin Christmas Markets. My Favourites! Alternative Arts and Culture Tour. What's On. The Little Museum of Dublin. Current Events. Howya. The shipping news: Dublin is reacquainted with its docks.