Non-formal learning for Syrian refugees. Hundreds of thousands of displaced Syrian children in Lebanon still have no schools. 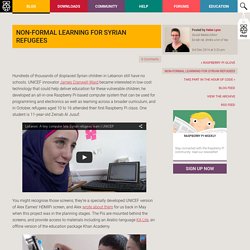 UNICEF innovator James Cranwell-Ward became interested in low-cost technology that could help deliver education for these vulnerable children; he developed an all-in-one Raspberry Pi-based computer system that can be used for programming and electronics as well as learning across a broader curriculum, and in October, refugees aged 10 to 16 attended their first Raspberry Pi class. One student is 11-year-old Zeinab Al Jusuf: You might recognise those screens; they’re a specially developed UNICEF version of Alex Eames’ HDMIPi screen, and Alex wrote about them for us back in May when this project was in the planning stages. The Pis are mounted behind the screens, and provide access to materials including an Arabic-language KA Lite, an offline version of the education package Khan Academy. 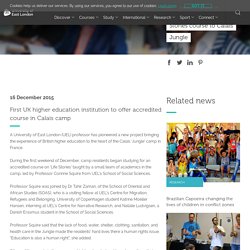 During the first weekend of December, camp residents began studying for an accredited course on ‘Life Stories’ taught by a small team of academics in the camp, led by Professor Corinne Squire from UEL’s School of Social Sciences. Professor Squire was joined by Dr Tahir Zaman, of the School of Oriental and African Studies (SOAS), who is a visiting fellow at UEL's Centre for Migration, Refugees and Belonging, University of Copenhagen student Katrine Moeller Hansen, interning at UEL’s Centre for Narrative Research, and Natalie Ludvigsen, a Danish Erasmus student in the School of Social Sciences.

Professor Squire said that the lack of food, water, shelter, clothing, sanitation, and health care in the Jungle made the residents’ hard lives there a human rights issue. “Education is also a human right”, she added. Lebanon: A tiny computer lets Syrian refugees learn​ TWB. Download Skype for Desktop Computer. If you like to chat, work and do a lot more on your PC, then Skype for Linux is the most powerful version for you. 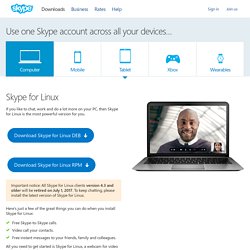