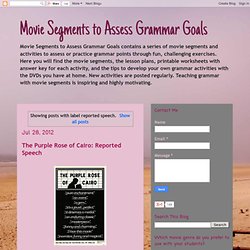 This is a great movie and teachers will enjoy it a lot. The teacher has to learn how to deal with these students. He does it in a very unusual way. I used the scene for reported speech. Discuss the following questions with a partner: 1) What should the ideal school be like? 2) Tell your partner about a class you will never forget. 3) Who is your favorite teacher? Watch the following video segment and decide who said each of the following lines: A Student 1) My dad won’t let me 2) What’s your name? 3) I only play piano 4) This is a bass guitar 5) Are there any drummers in the house? 6) I play percussion 7) Is this a school project? 8) What’s the prize? 9) Can we tell our parents? 10) Who can sing? 11) I can sing Now rewrite the sentences, using reported speech: 1) A student said that his dad wouldn’t let him. 2) The teacher asked what his name was. 3) A student said he only played piano.

English in Valencia: reported speech - gapfill exercise. Reported Speech. Reportedspeech_exercises.pdf (application/pdf Object) English Grammar Lessons. We use reported speech when we are saying what other people say, think or believe. 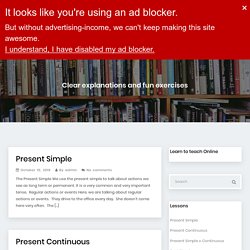 He says he wants it. We think you are right. I believe he loves her. Yesterday you said you didn't like it but now you do! She told me he had asked her to marry him. When we are reporting things in the present, future or present perfect we don't change the tense. He thinks he loves her. When we tell people what someone has said in the past, we generally make the tense 'more in the past'. You look very nice. = I told him he looked very nice. However, when we are reporting something that was said in the past but is still true, it is not obligatory to make the tense 'more in the past'. 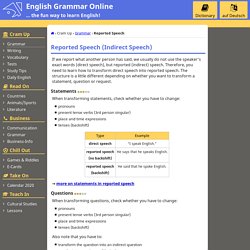