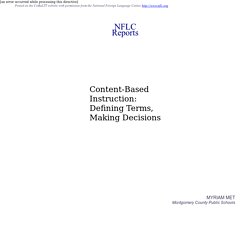 Programs, models, and approaches have proliferated at all levels of instruction, from elementary schools through postsecondary levels, bringing with them a diverse nomenclature to identify instructional settings where language and content are integrated. For many second and foreign language educators, the various forms of language/content integration fall under the rubric of content-based instruction. The term content-based instruction is commonly used to describe approaches to integrating language and content instruction, but it is not always used in the same way.

CLIL-CD Home. What is CLIL? Defining CLIL Content and Language Integrated Learning is an umbrella term which encompasses any activity in which a foreign language is used as a tool in the learning of a nonlanguage subject, where both language and subject have a joint role (Marsh 2002:58).The adoption of a specific term was a move towards defining more clearly the nature of CLIL midst a plethora of related approaches such as content-based instruction, immersion, bilingual education and so on. 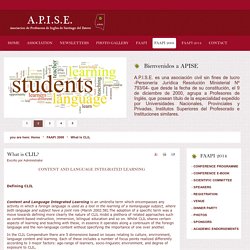 Whilst CLIL shares certain aspects of learning and teaching with these, in essence it operates along a continuum of the foreign language and the non-language content without specifying the importance of one over another. In the CLIL Compendium there are 5 dimensions based on issues relating to culture, environment, language content and learning. Each of these includes a number of focus points realized differently according to 3 major factors: age-range of learners, socio-linguistic environment, and degree of exposure to CLIL. 1. The practice and theory of CLIL. Give CLIL time. Rosie Tanner and Liz Dale are Content and Language Integrated Learning (CLIL) consultants and teacher trainers based in the Netherlands. 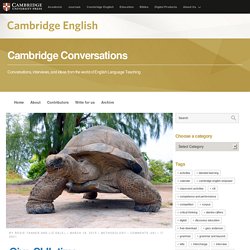 They are the authors of CLIL Activities: A resource book for subject and language teachers. In today’s post, Rosie and Liz look at the value of ‘slowing down’ in the classroom, in the context of CLIL. A personal resolution of ours recently is (yet again) to slow down. This video, “Creativity requires time” caught our attention, because it shows that slowing down actually can help creativity. The clip shows that if you give students 10 seconds to perform a task, they all come up with the same – or pretty similar – answers. 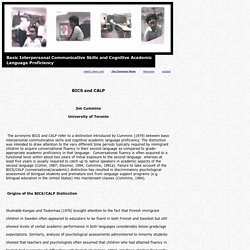 The distinction was intended to draw attention to the very different time periods typically required by immigrant children to acquire conversational fluency in their second language as compared to grade-appropriate academic proficiency in that language. Conversational fluency is often acquired to a functional level within about two years of initial exposure to the second language whereas at least five years is usually required to catch up to native speakers in academic aspects of the second language (Collier, 1987; Klesmer, 1994; Cummins, 1981a). Early critiques of the conversational/academic distinction were advanced by Carole Edelsky and her colleagues (Edelsky et al., 1983) and in a volume edited by Charlene Rivera (1984).

Article: Skills for CLIL. In this article John Clegg outlines the language and learning skills which a learner learning a subject through the medium of English as a second language (L2) requires. 1. 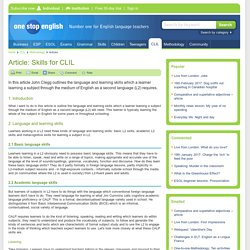 Introduction What I want to do in this article is outline the language and learning skills which a learner learning a subject through the medium of English as a second language (L2) will need. This learner is typically learning the whole of the subject in English for some years or throughout schooling. 2. Learners working in a L2 need three kinds of language and learning skills: basic L2 skills, academic L2 skills and metacognitive skills for learning a subject in L2. 2.1 Basic language skills Learners learning in a L2 obviously need to possess basic language skills. 2.2 Academic language skills But learners of subjects in L2 have to do things with the language which conventional foreign language learners don't have to do. Listening Take listening.

Reading Let's turn to reading. Writing Talking Finally they have to talk. 3.