11 innovative companies giving energy storage a jolt. Technological and market forces have converged to make energy storage one of the most exciting — and potentially game-changing — opportunities for commercial and industrial facility managers, grid operators, homeowners and investors. 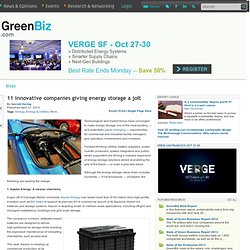 Forward-thinking utilities, battery suppliers, power inverter producers, system integrators and public-sector supporters are driving a massive expansion of energy storage solutions aimed at enabling the grid of the future — or even a grid-less future. Although the energy storage value chain includes hundreds — if not thousands — of players, the following are leading the charge. 1. Aquion Energy: A cleaner chemistry A spin-off of Carnegie Mellon University, Aquion Energy has raised more than $100 million from high-profile investors such as Bill Gates to support its planned 2014 commercial launch of its Aqueous Hybrid Ion batteries and storage systems.

This year, Aquion is ramping up commercial production at its manufacturing facility in western Pennsylvania. 6 electric utilities charging a new energy course. America's nearly 3,300 electric utilities increasingly are being portrayed as if they are on the proverbial Titanic, futilely rearranging the deck chairs of an ill-fated industry doomed to disappear beneath the powerful waves of 21st century innovation. 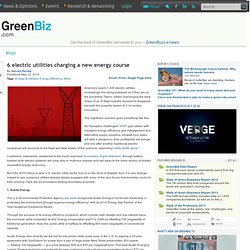 The nightmare scenario goes something like this: As "disruptive challenges" (PDF) gain steam with insurgent energy efficiency, grid management and alternative supply solutions, kilowatt-hour sales will take a dangerous dive, profitability will plunge, and one after another, traditional electric companies will succumb to the frigid and fatal waters of the ominous, impending "utility death spiral. " Customers, meanwhile, awakened to the much-improved "economics of grid defection" through battery-backed solar electric systems, will jump ship in mutinous masses and sail away to the warm shores of blissful renewable energy autonomy. 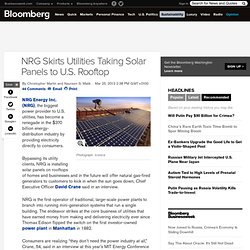 (NRG), the biggest power provider to U.S. utilities, has become a renegade in the $370 billion energy-distribution industry by providing electricity directly to consumers. Bypassing its utility clients, NRG is installing solar panels on rooftops of homes and businesses and in the future will offer natural gas-fired generators to customers to kick in when the sun goes down, Chief Executive Officer David Crane said in an interview. NRG is the first operator of traditional, large-scale power plants to branch into running mini-generation systems that run a single building. The endeavor strikes at the core business of utilities that have earned money from making and delivering electricity ever since Thomas Edison flipped the switch on the first investor-owned power plant in Manhattan in 1882.

Consumers are realizing “they don’t need the power industry at all,” Crane, 54, said in an interview at this year’s MIT Energy Conference in Cambridge, Massachusetts. Solar Third-Party Financing at $3.34 Billion In 2013: Key To The U.S. Solar Boom. The U.S. solar energy boom would not be possible without third-party financing entities. 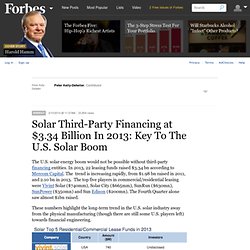 In 2013, 22 leasing funds raised $3.34 bn according to Mercom Capital. The trend is increasing rapidly, from $1.98 bn raised in 2011, and 2.10 bn in 2013. The top five players in commercial/residential leasing were Vivint Vivint Solar ($740mm), Solar City ($665mm), SunRun ($630mn), SunPower SunPower ($350mn) and Sun Edison Edison ($200mn). The Fourth Quarter alone saw almost $1bn raised. These numbers highlight the long-term trend in the U.S. solar industry away from the physical manufacturing (though there are still some U.S. players left) towards financial engineering. Image: Mercom Capital By the latter part of the 2000’s, it had become abundantly clear that China was going to dominate, commoditize, and oversupply the panel segment of the industry. There are generally two ways to structure third-party financing; leasing or power purchase agreements. Examples of Well-Known Business Models.

This is the second of a three-part series. 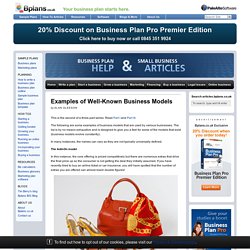 Read Part I and Part III. The following are some examples of business models that are used by various businesses. The list is by no means exhaustive and is designed to give you a feel for some of the models that exist (business models evolve constantly). In many instances, the names can vary as they are not typically universally defined. The Add-On model In this instance, the core offering is priced competitively but there are numerous extras that drive the final price up so the consumer is not getting the deal they initially assumed. The Advertising model The advertising model became popular with the growth of radio and TV where the TV stations earned revenue indirectly from people looking to promote services to the audience they attracted, rather than via consumers paying radio and TV stations for the consumption of their TV programmes.

However, this business model is increasingly difficult to justify if it is your main revenue stream. Business_Model_Canvas.png (8355×5910) Examples of Well-Known Business Models. Distributed generation: Devolving power.