Victorian Britain. Victorian Britain: a brief history - The Historical Association. Publication date: 17th January 2011 The Penny Black The 19th century was one of rapid development and change, far swifter than in previous centuries. 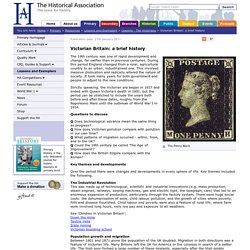 During this period England changed from a rural, agricultural country to an urban, industrialised one. This involved massive dislocation and radically altered the nature of society. It took many years for both government and people to adjust to the new conditions. Victorian History. Victorian Social History: Sitemap. Victorian era. Period of British history encompassing Queen Victoria's reign. 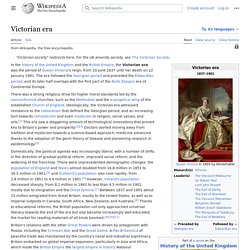 History: Victorians. History in Focus: Overview of The Victorian Era (article) Article Overview of the Victorian Era by Anne Shepherd Queen Victoria (1819-1901) was the first English monarch to see her name given to the period of her reign whilst still living (1). 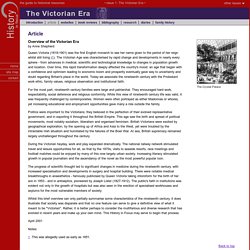 The Victorian Age was characterised by rapid change and developments in nearly every sphere - from advances in medical, scientific and technological knowledge to changes in population growth and location. Over time, this rapid transformation deeply affected the country's mood: an age that began with a confidence and optimism leading to economic boom and prosperity eventually gave way to uncertainty and doubt regarding Britain's place in the world. 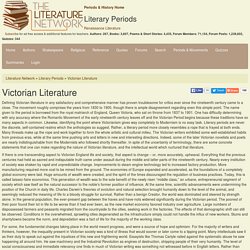 The movement roughly comprises the years from 1830 to 1900, though there is ample disagreement regarding even this simple point. The name given to the period is borrowed from the royal matriarch of England, Queen Victoria, who sat on throne from 1837 to 1901. One has difficulty determining with any accuracy where the Romantic Movement of the early nineteenth century leaves off and the Victorian Period begins because these traditions have so many aspects in common.

Likewise, identifying the point where Victorianism gives way completely to Modernism is no easy task. If there is one transcending aspect to Victorian England life and society, that aspect is change – or, more accurately, upheaval. This article is copyrighted © 2011 by Jalic Inc. Introduction to Victorian Literature: Overview of Themes, Style, and Authors. Victorian Literature. In a Nutshell It was the best of times for the serialized novel; it was the worst of times for satire. 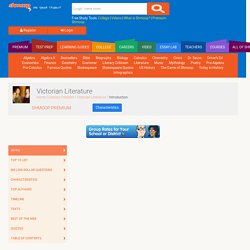 Yep, that's the Victorian era for you. Named for a spiffy royal lady (you guessed it: Queen Victoria), this period lasted sixty-four years—not too long in the grand scheme of things, but that didn't stop writers from taking their sweet ol' time. Remember A Tale of Two Cities? Yeah, that was Dickens at his most concise. Satire wasn't exactly thriving in an age that prized all things bright-eyed and bushy-tailed. Why was it important to be earnest? Victorians didn't let their kids off the hook, either. From the didactic novel to magazines that claimed to be wholesome for the whole family, the Victorians found ways to improve every shining minute. The 19th century was also the age of good humor and joviality. If Victorian lit had a motto, it might well be "work hard, play hard"—which might explain all those 800-page novels: all that work for all that fun.

These 7 Victorian Era Traditions Are Really Morbid. The Victorian era of British history (1837 to 1901) was one of the more progressive eras in human history. 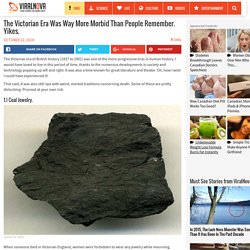 I would have loved to live in this period of time, thanks to the numerous developments in society and technology popping up left and right. It was also a time known for great literature and theater. Oh, how I wish I could have experienced it! That said, it was also still ripe with weird, morbid traditions concerning death. Some of these are pretty disturbing. 1.) When someone died in Victorian England, women were forbidden to wear any jewelry while mourning. 2.) After the first phase of mourning was finished, women were allowed to wear a single piece of jewelry. 3.) When someone died in a Victorian household, all the mirrors in the house had to be covered. Bodies also had to be removed from the house head first. 4.) Since Victorian medicine was not very advanced, people were always afraid of being buried alive. 5.) English literature: The Victorian Age. The Victorian Era - 1837-1901 on AboutBritain.com. Victorian England. For much of this century the term Victorian, which literally describes things and events (roughly) in the reign of Queen Victoria, conveyed connotations of "prudish," "repressed," and "old fashioned. 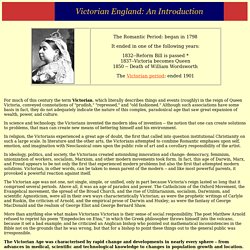 " Although such associations have some basis in fact, they do not adequately indicate the nature of this complex, paradoxical age that saw great expansion of wealth, power, and culture. In science and technology, the Victorians invented the modern idea of invention -- the notion that one can create solutions to problems, that man can create new means of bettering himself and his environment. In religion, the Victorians experienced a great age of doubt, the first that called into question institutional Christianity on such a large scale. The Victorian Period.