Eric Trump says you wouldn't understand his daddy's taxes. Donald Trump is the first presidential candidate in a generation to hide his financial data from the electorate. 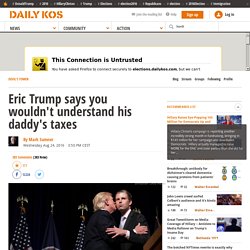 But according to son Eric, daddy Trump has a good reason. You wouldn't understand it anyway. Trump's Tax Plan Is A Big Giveaway To The Wealthiest. On Monday, Republican presidential candidate Donald Trump will unveil a detailed tax reform plan — and he is already positioning it as a populist proposal. 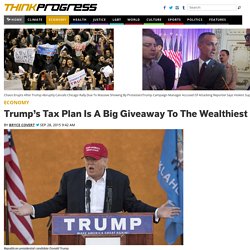 In a press alert about the plan, the campaign states, “Essentially, the plan is a major tax reduction for almost all citizens and corporations, in particular, those in the middle and lower income classes.” And already, the portion of the plan that affects low-income Americans, which would impose a zero percent tax rate on individuals who make less than $25,000 and married couples who make less than $50,000, is generating headlines. “Trump promises a ZERO per cent tax rate for millions: He plans to cut tax for the poor, middle classes and corporations, soak the rich,” the Daily Mail headline reads. “Mr. Trump’s plan appears designed to help him, as the GOP front-runner, cement his standing as a populist,” the Wall Street Journal article previewing the details states. 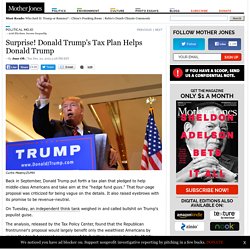 " That four-page proposal was criticized for being vague on the details. It also raised eyebrows with its promise to be revenue-neutral. On Tuesday, an independent think tank weighed in and called bullshit on Trump's populist guise. The analysis, released by the Tax Policy Center, found that the Republican frontrunner's proposal would largely benefit only the wealthiest Americans by giving the top 0.1 percent an average of $1.3 million a year in tax cuts.

The plan would also wipe out revenue by a staggering $9.5 trillion over the next decade, according to the TPC. "The revenue losses from this plan are really enormous," Len Burman, director of the TPC, said. Is Trump’s Tax Plan Revenue Neutral? Donald Trump claims his tax plan is “revenue neutral,” but tax experts say that just isn’t so. 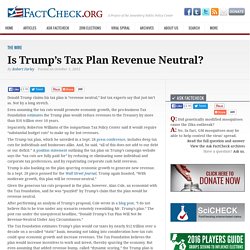 Not by a long stretch. Even assuming the tax cuts would promote economic growth, the pro-business Tax Foundation estimates the Trump plan would reduce revenues to the Treasury by more than $10 trillion over 10 years. Separately, Roberton Williams of the nonpartisan Tax Policy Center said it would require “substantial budget cuts” to make up for lost revenues. The Trump tax plan, which he unveiled in a Sept. 28 press conference, includes deep tax cuts for individuals and businesses alike. And, he said, “all of this does not add to our debt or our deficit.” Trump's Tax Plan: So Terrific That It Would Add More Debt Than Obama's Seven Years In Office - Matt Vespa. For a man who is running to “make America great again,” Donald Trump’s tax plan is exceedingly expensive. 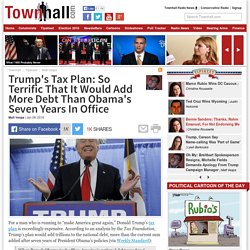 According to an analysis by the Tax Foundation, Trump’s plan would add trillions to the national debt, more than the current sum added after seven years of President Obama’s policies (via Weekly Standard): When Barack Obama took office, America’s national debt was $10.6 trillion. It's now $19.0 trillion—an increase of $8.4 trillion in just seven years, or $1.2 trillion per year. One of the key reasons the Tea Party movement was founded was out of frustration with this skyrocketing debt. Donald Trump's Tax Plan Would Make the Rich Richer, Uncle Sam Poorer. An analysis of Donald Trump’s tax plan by a research institute reveals two interesting points: the U.S. government would get a lot poorer, and the wealthy would get a lot richer. 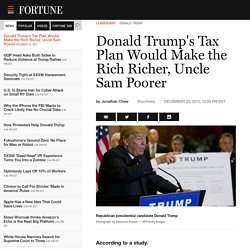 In the Tax Policy Center’s analysis of the Republican candidate’s proposal, the institute said that Trump’s plan would reduce federal revenues by $9.5 trillion over its first decade, and an additional $15.0 trillion over the next 10 years. Including interest costs, the Center said, the proposal would add $11.2 trillion to the national debt by 2026. How Trump’s $50m golf club became $1.4m when it came time to pay tax. An attempt by Donald Trump to slash the property tax bill on a golf club outside New York City may be undermined by records indicating that he previously said the property was worth 35 times more than the value he is now trying to convince a judge to approve. 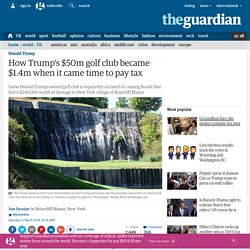 The Republican presidential frontrunner is suing the town of Ossining in Westchester County to reduce the taxes on Trump National Golf Club, a 147-acre property with a lavish clubhouse and 18-hole course whose managers are separately accused of causing floods that led to $240,000 worth of damage to local public facilities. Trump’s lawsuit in county court argues that the luxurious private club, which he bought in foreclosure for about $8m in the mid-1990s before spending what he claimed at the club’s opening event was another $45m in improvements, has been unfairly assessed and is in fact worth only $1.4m. “That is crazy low,” Fernando Gonzalez, the Ossining town assessor, said in an interview.

Trump resurrects Dubya’s 'death tax' myth in Iowa. Speaking to farmers in Spencer, Iowa, on Saturday, 2016 GOP front-runner Donald Trump declared, "We are going to get rid of the estate taxes that are making the farmers sell their farms. 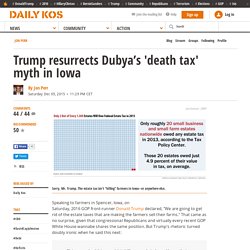 " That came as no surprise, given that congressional Republicans and virtually every recent GOP White House wannabe shares the same position. But Trump's rhetoric turned doubly ironic when he said this next: "It is a very bad thing, and it is killing people in Iowa. I know that for a fact. " After all, back in 2001 President George W. Only roughly 20 small business and small farm estates nationwide owed any estate tax in 2013, according to the Tax Policy Center. In April 2001, President Bush sold his plan to eliminate the estate tax this way. ''I heard somebody say, 'Well, you know, the death tax doesn't cause people to sell their farms,' '' he added. Donald Trump's false claim that his tax plan wouldn't increase the deficit.

A week after the third GOP debate, Donald Trump is still salty at CNBC’s John Harwood, the moderator who asked him whether his 2016 bid was a "comic book version" of a presidential campaign. 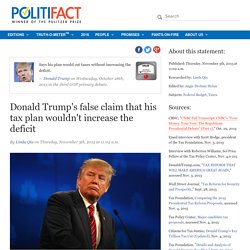 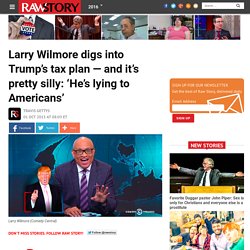 The Republican frontrunner released his tax plan Monday that would remove about half of all households — roughly 75 million families — from the federal income tax roll. Larry Wilmore examined this plan Wednesday on “The Nightly Show,” and he pointed out that single people who earn less than $25,000 or married couples who earn $50,000 or less would not be required to pay income taxes under Trump’s proposal. But, Trump being Trump, that’s when things get goofy. “How will these 75 million people pay their taxes?” Wilmore said. “‘I win? '” Now We Know Why Trump Has Declared Bankruptcy 4 Times. If you ever wondered about the reason why Donald Trump has declared bankruptcy four times, a quick peek at the Republican presidential hopeful’s tax plan might provide some insight. In short, Trump’s voodoo science economics simply doesn’t work and even conservatives think so.

Take, for instance, noted conservative think tank Tax Foundation that collects data and publishes research studies on tax policies at the federal and state levels. Trump: Don't Make Corporations Pay Their Taxes. <a class="icopyright-article-tools-noscript" href=" target="_blank" title="Main menu of all reuse options"><img height="25" width="27" border="0" align="bottom" alt="[Reuse options]" src=" Click here for reuse options! </a> Republican economics has been stated a thousand ways by a thousand (always paid) voices. But the basic idea behind all the schemes has been hard to pin down. Finally Republican front-runner Donald Trump has spelled it out in a way anyone can understand.