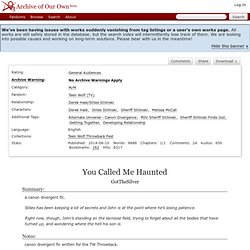 The Lone Wolf Series. Will to follow through - Chapter 1 - owlpostagain. Chapter Text you can’t hold on to the thrill so I hope you find your will to follow through (what we invented I am now ending) Watching Lydia sink to the filthy concrete floor, cradling Jackson like the dirt and the blood and the slick sweat don’t mean anything, like there’s nothing that can stop her from sharing those last few breaths with him – it does something to Stiles. 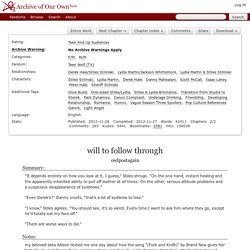 Does something to his ribs, maybe, makes them brittle and sharp, curling in a little tighter and pinching his lungs, his heart. Here is the deepest secret nobody knows - owlpostagain. Here is the deepest secret nobody knows (here is the root of the root and the bud of the bud and the sky of the sky of a tree called life; which grows higher than soul can hope or mind can hide) and this is the wonder that's keeping the stars apart It’s something of a tragic commentary on Stiles’ life that he doesn’t even flinch at the sight of a dark figure slouched against his bedroom wall. 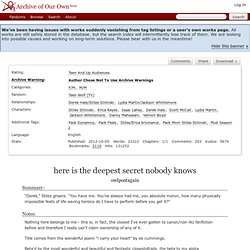 Secret club house entrance, werewolves only; he was going to have a sign made and hung outside his window, maybe take a Sharpie to it and cross out ‘were’ for ‘sour,’ because why the fuck not. “Really, I do have a front – Erica?” Stiles freezes, fingers still fumbling against the light switch that had just helped throw the shadowy corner into sharp relief. Erica Reyes, the last werewolf, last person he ever would have expected, is slumped against the window frame, blonde curls tangled and matted and filthy across her face, hanging damp and heavy with oh god that was blood. “Okay,” he says again. “So. When I'm Gone - Chapter 1 - Yukikoneko1990 - teen wolf - Fandom. The Past (In Present Tense) - infinite_wonders. Stiles learns to compartmentalize and prioritize about two weeks after his mom dies. 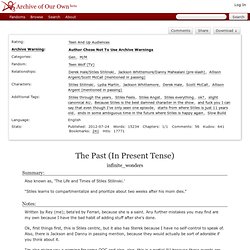 He’s only a kid, and he’s hurting too, so much oh God; but his dad has it so much worse than he does that he can't even stand it. With Mom gone, Dad just breaks, stops eating, sleeping, functioning— --it’s like looking at a zombie from one of those movies that he’s not really supposed to be watching but does anyway, except his dad has a set routine. It’s not healthy, not in the least, but Stiles isn’t really interested in losing the only other person he has left in the world. So he gathers himself up, dries his tears, neatly boxes himself away, and focuses on picking up after what's left of his family.

He ignores the hurt and concentrates on researching everything instead. At the ripe old age of eleven, he learns to be a mature, responsible adult. He meticulously rebuilds his world, one little piece at a time, until a picture starts to form from the broken shards of his life. O.O.o.O.o o.O.o.O.o (Anyway.) Bah. The Offering - Kellygirl - teen wolf - Fandom. The Life of Stiles - rispacooper. The Good Marks You - starsystems. Stilinski's Home for Wayward Wolves - owlpostagain. Sometimes Stiles feels a little bit guilty about considering such a massacre to be the best thing that’s happened to him in the last five years. 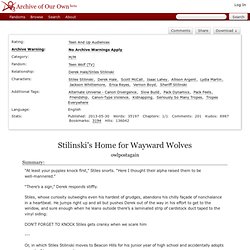 Reasonable to Assume - Chapter 1 - Saucery. Pack Dynamics For Dummies - Chapter 1 - SpiritsFlame. Chapter Text As it turns out, carpentry is not among Stiles’ many skills. 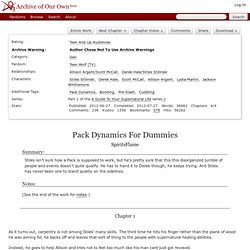 The third time he hits his finger rather than the plank of wood he was aiming for, he backs off and leaves that sort of thing to the people with supernatural healing abilities. Instead, he goes to help Allison and tries not to feel too much like his man card just got revoked. Project ‘Make the Hale House Look Less Like it’s On The Brink Of Being Condemned And Make It Look Like A Real Wolf Den’ is well underway. In lieu of the name that Stiles came up with, the others have been calling it ‘Project Rebuild.’ It had taken almost a month and a half for Derek’s new Pack to convince him that the fire-ruined chic thing he was rocking now wasn’t working for any of them, and they should probably try and fix it up. Even then, it had taken Stiles some serious wheedling and more than a few clever tricks to get Derek on board with it. It had grown from there.

Mating Habits of the Domesticated North American Werewolf - Chapter 1 - lielabell. Letting Go - Chapter 1 - Yukikoneko1990 - teen wolf - Fandom. In Fashion - stilinskisparkles. I Love To Be The Underdog - Chapter 1 - CaptainnAustralia. Every Step You Take - Chapter 1 - Nokomis. Archive of Our Own.