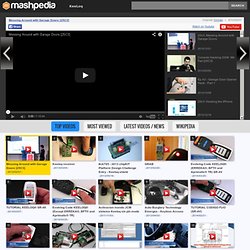 The uni-directional command transfer protocol was designed by Frederick Bruwer, PhD, CEO at Nanoteq (Pty) Ltd and the cryptographic algorithm was created by Professor Gideon Kuhn with the silicon implementation by Willem Smit, PhD, at Nanoteq Pty Ltd (South Africa) in the mid 80's and sold to Microchip Technology Inc in 1995 for $10 million. [1] It's used in "code hopping" encoders and decoders such as NTQ105/106/115/125D/129D and HCS101/2XX/3XX/4XX/5XX. Homelink Bug Side-Effects. Homelink is a standard for wireless remote activation. 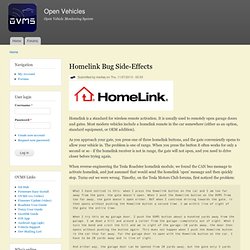 It is usually used to remotely open garage doors and gates. Most modern vehicles include a homelink remote in the car somewhere (either as an option, standard equipment, or OEM addition). As you approach your gate, you press one of three homelink buttons, and the gate conveniently opens to allow your vehicle in. The problem is one of range. When you press the button it often works for only a second or so - if the homelink receiver is not in range, the gate will not open, and you need to drive closer before trying again. When reverse-engineering the Tesla Roadster homelink module, we found the CAN bus message to activate homelink, and just assumed that would send the homelink 'open' message and then quickly stop.

What I have noticed is this: when I press the Homelink button on the car and I am too far away from the gate, the gate doesn't open. There are times when a bug becomes very useful. Brevet US7120430 - Programmable interoperable appliance remote control - Google Brevets. 1. 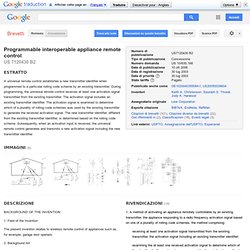 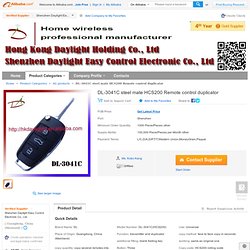 Or we want to copy another remote in stock, incase the original one is lost. DL-3041C self-learning remote control can easily finish the copy in seconds, it is specially designed for Audi A6. It is with a blank folding key, and back cover is made from high quality plastic. The biggest advantage of this remote wireless control is its auto-copy function. It will bring you much convenience. Feature: Alarm Homelink, KeeLoq, garage doors, alarms and others - Civinfo. Let me share with you some interesting findings around hopping codes and a big question I could not find an answer to it. 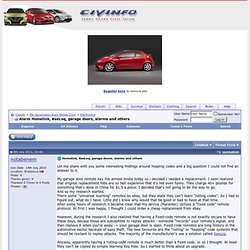 My garage door remote key fob almost broke today so i decided I needed a replacement. I soon realized that original replacement fobs are so hell expensive that it's not even funny. They charge 40+ pounds for something that's done in China for $1.5 a piece. I decided that's not going to be the way to go. And so my research started. However, during the research I also realized that having a fixed-code remote is not exactly secure to have these days, becase those are susceptible to replay attacks - someone "records" your remote's signal, and then replays it when you're away -> your garage door is open. Anyway, apparently having a rolling-code remote is much better than a fixed code, or so I thought.

BTW: as it turned out, all Marantec devices are fixed code. And the attacks: Defense against KeeLoq attacks So I put the facts together: 1. A short note on KeeLoq. All the keyless entry applications (car remotes, garage door openers, etc.) based on the Keeloq cipher (known under the marketing names "code hopping", "floating code", "rolling code", etc.) were long claimed to be secure. 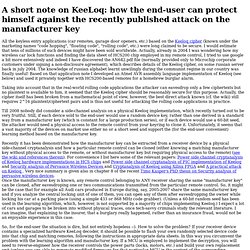 I would estimate that tens of millions of such devices might have been sold worldwide. Actually, already in 2004 I was wondering how my wireless car lock functions and finding the data sheet of HCS200 chip employed in my remote control, I tried to use google a bit more extensively and indeed I have discovered the AN642.pdf file (normally provided only to Microchip corporate customers under signing a non-disclosure agreement), which describes details of the Keeloq cipher, on some russian server back in july 2004. The knowledge of russian alphabet learnt unwilingly during the communist regime in our country was finally useful!

Till 2008 nobody did consider a side-channel analysis on a physical Keeloq implementation, which recently turned out to be very fruitful.