Watch What Happens After A 13-Year-Old Boy Leaves “Public Education” When conformity and rigidity are replaced with free thinking and innovation, the results can be quite stunning. 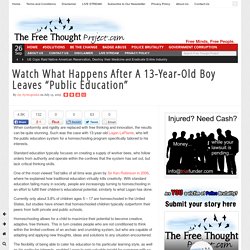 Such was the case with 13-year-old Logan LaPlante, who left the public education system for a homeschooling program specifically tailored to his interests. Standard education typically focuses on creating a supply of worker bees, who follow orders from authority and operate within the confines that the system has set out, but lack critical thinking skills. One of the most viewed Ted talks of all time was given by Sir Ken Robinson in 2006, where he explained how traditional education virtually kills creativity. 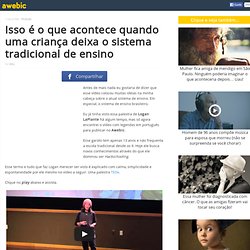 Traditional classroom methods are often unsuccessful, and many schools are ill-equipped to meet the needs of children with learning differences. 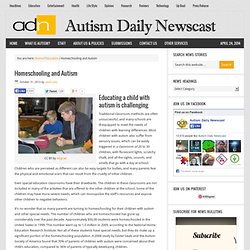 Most children with autism also suffer from sensory issues, which can be easily triggered in a classroom of 20 to 30 children, with florescent lights, scratchy chalk, and all the sights, sounds, and smells that go with a day at school. Children who are perceived as different can also be easy targets for bullies, and many parents fear the physical and emotional scars that can result from the cruelty of other children. Even special education classrooms have their drawbacks. The children in these classrooms are not included in many of the activities that are offered to the other children at the school. Some of the children may have more severe needs, which can monopolize the staff’s resources and expose other children to negative behaviors. Parents give several reasons for homeschooling their children with autism. O dia a dia de uma família de homeschoolers que aprende coisas novas todos os dias.

The lazy girl’s guide to home education. Homeschooling: Where to start and how to keep going. Un/homeschool. Boo! Are Fairy Tales Too Scary for Kids? “But they’re so awful!” 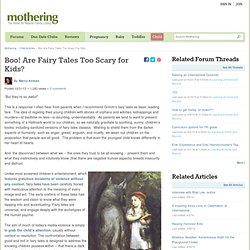 This is a response I often hear from parents when I recommend Grimm’s fairy tales as basic reading fare. The idea of regaling their young children with stories of orphans and witches, kidnappings and murders—at bedtime no less—is daunting, understandably. As parents we tend to want to present something of a Hallmark world to our children, so we naturally gravitate to soothing, sunny, children’s books, including sanitized versions of fairy tales classics.

Wishing to shield them from the darker aspects of humanity, such as anger, greed, anguish, and cruelty, we wean our children on the proposition that people are all good. The problem is that even the youngest child knows differently in her heart of hearts. And the disconnect between what we -- the ones they trust to be all-knowing -- present them and what they instinctively and intuitively know (that there are negative human aspects) breeds insecurity and distrust. “Good-day, Little Red-Cap,” he said. “Oh!