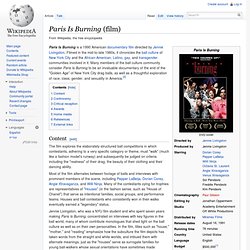 Filmed in the mid-to-late 1980s, it chronicles the ball culture of New York City and the African-American, Latino, gay, and transgender communities involved in it. Many members of the ball culture community consider Paris Is Burning to be an invaluable documentary of the end of the "Golden Age" of New York City drag balls, as well as a thoughtful exploration of race, class, gender, and sexuality in America.[2] The film explores the elaborately-structured ball competitions in which contestants, adhering to a very specific category or theme, must "walk" (much like a fashion model's runway) and subsequently be judged on criteria including the "realness" of their drag, the beauty of their clothing and their dancing ability. 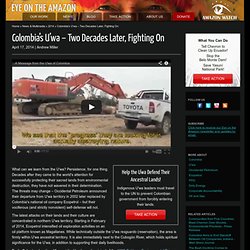 What can we learn from the U'wa? Persistence, for one thing. Decades after they came to the world's attention for successfully protecting their sacred lands from environmental destruction, they have not wavered in their determination. The threats may change – Occidental Petroleum announced their departure from U'wa territory in 2002 later replaced by Colombia's national oil company Ecopetrol – but their vociferous (and strictly nonviolent) self-defense will not. The latest attacks on their lands and their culture are concentrated in northern U'wa territory. Berito Cobaría – longtime U'wa spiritual leader and recipient of the 1998 Goldman Environmental Prize – spoke out in a recently published video interview.

The American Dream - The Story of Your Enslavement. The AMERICAN DREAM is a 30 minute animated film that shows how we have been scammed by the most basic elements of our government system. 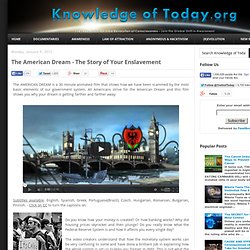 All Americans strive for the American Dream and this film shows you why your dream is getting farther and farther away. Subtitles available: English, Spanish, Greek, Portuguese(Brazil), Czech, Hungarian, Romanian, Bulgarian, Finnish. - Click on CC to turn the captions on. Do you know how your money is created? Or how banking works? Why did housing prices skyrocket and then plunge? The video creators understand that how the monetary system works can be very confusing to some and have done a brilliant job in explaining how the whole system is set up to keep you forever in debt. THE AMERICAN DREAM takes an entertaining but hard hitting look at how the problems we have today are nothing new, and why leaders throughout our history have warned us and fought against the current type of financial system we have in America today.