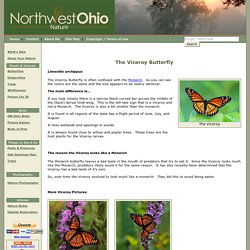 As you can see the colors are the same and the size appears to be nearly identical. Niña alimenta cuervos por años y ahora ellos le llevan regularmente obsequios. Möwe klaut meine GoPro und filmt die Aussicht von der Insel Cíes... He thought that this fawn's legs were broken, but after a few minutes he was shocked by the truth! Now, this video is adorable. 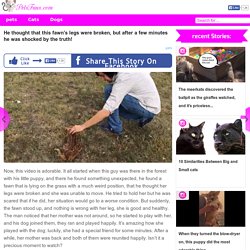 It all started when this guy was there in the forest with his little puppy, and there he found something unexpected, he found a fawn that is lying on the grass with a much weird position, that he thought her legs were broken and she was unable to move. He tried to hold her but he was scared that if he did, her situation would go to a worse condition. But suddenly, the fawn stood up, and nothing is wrong with her leg, she is good and healthy. The man noticed that her mother was not around, so he started to play with her, and his dog joined them, they ran and played happily. Florida man snaps picture of raccoon riding an alligator - NY Daily News. AFA Coalition - The Truth Behind Elephant Rides in Thailand. Throughout Thailand, there are countless elephant tourist parks and camps. 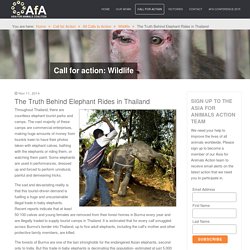 The vast majority of these camps are commercial enterprises, making huge amounts of money from tourists keen to have their photos taken with elephant calves, bathing with the elephants or riding them, or watching them paint. Some elephants are used in performances, dressed up and forced to perform unnatural, painful and demeaning tricks. Why Are These People Crying? When people in Miami came face-to-face with the startling reality of where their food comes from, they were horrified. 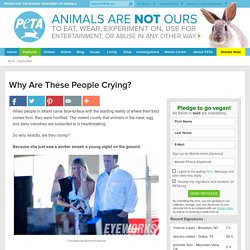 The violent cruelty that animals in the meat, egg, and dairy industries are subjected to is heartbreaking. So why, exactly, are they crying? Because she just saw a worker smash a young piglet on the ground. Because he just saw a cow get hit over the head with a hammer. Crow rescue. Videoclub - Hombre graba los últimos momentos de su vida antes de morir atacado por una osa. Here's what a giant school of anchovy swarming off the California coast looks like. A very large school of Northern Anchovy (aka California Anchovy) swarmed off Scripps Pier at the Scripps Institution of Oceanography, UC San Diego, in La Jolla this week. 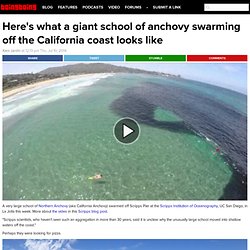 More about the video in this Scripps blog post. "Scripps scientists, who haven't seen such an aggregation in more than 30 years, said it is unclear why the unusually large school moved into shallow waters off the coast. " Perhaps they were looking for pizza. Uganda: Police officer shoots 'aggressive' tortoise. 7 July 2014Last updated at 08:56 ET News from Elsewhere... ...media reports from around the world, found by BBC Monitoring A police officer in Uganda has reportedly shot a tortoise dead after being attacked by the "aggressive" creature. 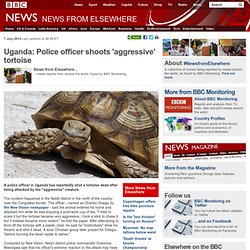 The incident happened in the Nebbi district in the north of the country near the Congolese border. The officer - named as Charles Onegiu by the New Vision newspaper - said the animal entered his home and attacked him while he was enjoying a post-work cup of tea. "I tried to scare it but the tortoise became very aggressive. Contacted by New Vision, Nebbi district police commander Onesmus Mwesigwa said that his officer's extreme reaction to the attack may have been down to local superstitions "where people think 'somebody is after me'".

Cam. Encuentros y avistamientos de tiburones. A little goat is almost drowning in a pond but then suddenly something happens no one would have expected ... El gato mas feliz recibiendo a su humano. April 10th, 20147 Comentarios. 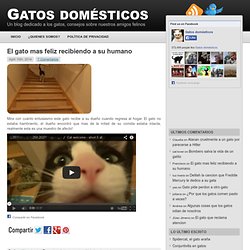 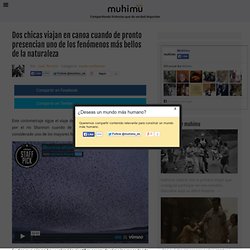 Great White release. Luna, a wild orca boy, tries to communicate with humans by imitating their boat's motor! Orcas Attack Seal. Face-Off With a Deadly Predator. Close Encounters of the Giant Kind. Diver: I thought the other diver was inside the whale. Killer whales surprise couple on boat. National Geographic photographer meets deadly leopard seal…and she takes care of him! Science Bulletins: Whales Give Dolphins a Lift. Humpback Whale Shows AMAZING Appreciation After Being Freed From Nets. Gray whale dies bringing us a message — with stomach full of plastic trash! July 29, 2013, a sperm whale was stranded on Tershelling, a northern island in the Netherlands. 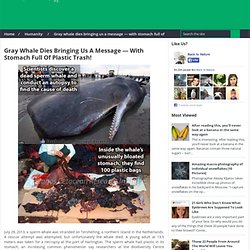 A rescue attempt was attempted, but unfortunately the whale died. A young adult at 13.5 meters was taken for a necropsy at the port of Harlington. The sperm whale had plastic in its stomach, an increasing common phenomenon say researchers at the Biodiversity Centre Naturalis. In March of this year, a 10 meter long sperm whale washed up on Spain’s South Coast. This whale had swallowed 59 different plastic items totaling over 37 pounds. These are not uncommon incidents. The sperm whale that stranded in the Netherlands had a large part of its lower jaw missing. Another family of deep diving, squid eating cetaceans is the beaked whales.

Baleen whales suffer the same fate, not for the fact trash resembles their food, but because they gulp large amounts of water when feeding. 10 Incredible Photos of Animals In the Womb. Elephant "A womb is the actual place where one takes birth, where the life begins from. 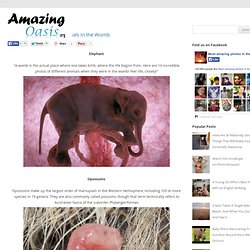 Here are 10 incredible photos of different animals when they were in the womb! Feel life, closely! " Opossums Opossums make up the largest order of marsupials in the Western Hemisphere, including 103 or more species in 19 genera. Cheetah The cheetah is a large feline inhabiting most of Africa and parts of the Middle East. Lemon Shark The lemon shark is a shark in the family Carcharhinidae. Dolphins Dolphins are marine mammals closely related to whales and porpoises.

Snake Snakes are elongated, legless, carnivorous reptiles of the suborder Serpentes that can be distinguished from legless lizards by their lack of eyelids and external ears. Penguins Penguins are a group of aquatic, flightless birds living almost exclusively in the southern hemisphere, especially in Antarctica. Tiger Shark The tiger shark, Galeocerdo cuvier, is a species of requiem shark and the only member of the genus Galeocerdo.