Is Bernie Sanders the Most LGBT-Friendly Candidate? Bernie Sanders, the longest-serving independent member of Congress, is officially seeking the Democratic nomination for president in 2016, the Vermont senator announced in an email to supporters this morning. 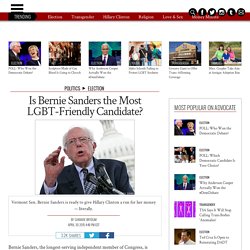 "People should not underestimate me," Sanders told the Associated Press in an interview that broke the news of his candidacy Wednesday night. "I've run outside of the two-party system, defeating Democrats and Republicans, taking on big-money candidates and, you know, I think the message that has resonated in Vermont is a message that can resonate all over this country. " The self-described "Democratic socialist" wants to challenge the business-as-usual trend of big money in politics that he says dominates the current candidates — including Hillary Clinton.

The thrust of Sanders's campaign thus far — like his political career as the mayor of Burlington, Vt., 16 years in the U.S. House of Representatives, and the past seven in the U.S. Column: Latinos should 'feel the Bern' He is the improbable candidate with unruly hair who is upsetting the 2016 race. 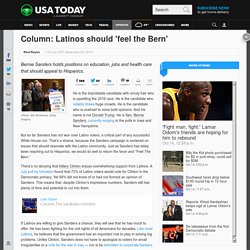 He is the candidate who reliably draws huge crowds. Column: Latinos should 'feel the Bern' Bernie Sanders seeks to ban private prisons. Sen. 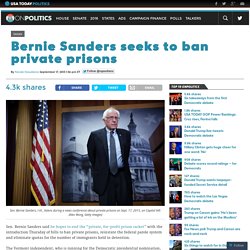 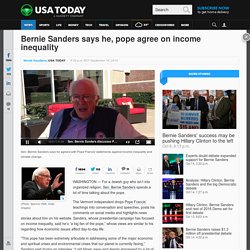 Bernie Sanders says he agrees with Pope Francis' statements against income inequality and climate change. WASHINGTON — For a Jewish guy who isn’t into organized religion, Sen. Bernie Sanders spends a lot of time talking about the pope. The Vermont independent drops Pope Francis’ teachings into conversation and speeches, posts his comments on social media and highlights news stories about him on his website. Sanders, whose presidential campaign has focused on income inequality, said he’s “a big fan of the pope,” whose views are similar to his regarding how economic issues affect day-to-day life.

“This pope has been extremely articulate in addressing some of the major economic and spiritual crises and environmental crises that our planet is currently facing,” Sanders said during an interview. Sanders disagrees with various tenets of the Catholic Church (he supports abortion rights and gay rights). “The pope is extremely popular in our country and around the world,” Sanders said. Bernie Sanders defends Pope Francis: He is helping to ‘significantly turn the tide’ on climate change. Sen. 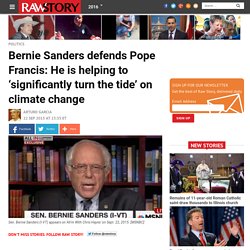 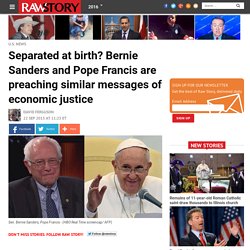 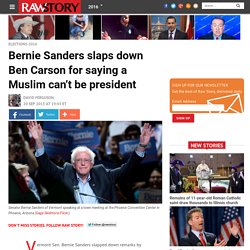 Bernie Sanders slapped down remarks by Republican presidential candidate Ben Carson on Sunday in which Carson said that no Muslim should ever be president of the United States. According to The Hill, Sanders said, “I am very disappointed that Dr. Carson would suggest that a Muslim should not become president of the United States.” The statement went on to say, “It took us too long to overcome the prejudice against electing a Catholic or an African-American president. People should be elected to office based on their ideas, not their religion or the color of their skin.”

Carson was appearing on Meet the Press on Sunday when host Chuck Todd asked, “Should a president’s faith matter?” Bernie Sanders tells Colbert why he doesn’t take SuperPAC money: We’re a ‘people’s campaign, not a billionaire’s’ Don't miss stories. 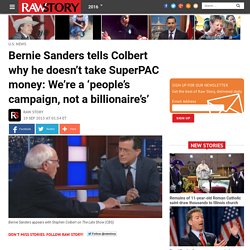 Follow Raw Story! The current front runner in Iowa and New Hampshire for the Democratic Party nomination for president, Senator Bernie Sanders, joined host Stephen Colbert on Friday night’s episode of The Late Show to discuss health care, taxes and income inequality. The audience went wild when Colbert asked them if they were “feeling the Bern.” During the interview, Colbert argued that capitalism made America the wealthiest nation on Earth. Bernie Sanders demands Donald Trump apologize over anti-Muslim question. Sen. 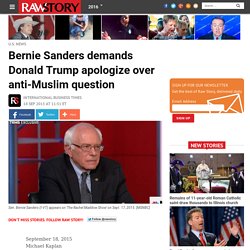 Bernie Sanders (I-VT) appears on 'The Rachel Maddow Show' on Sept. 17, 2015. [MSNBC] Don't miss stories. Follow Raw Story! Bernie Sanders demands Donald Trump apologize over anti-Muslim question. Bernie Sanders’s ability to rally black supporters may be critical to his success. Bernie Sanders is rising in the rankings of would-be Democratic candidates, the new poll indicates (AFP Photo/Mark Wilson) Activists have called on Bernie Sanders to make a more explicit commitment to tackling racial as well as economic inequality, despite a meeting in Washington designed to shore up his support among African American voters. 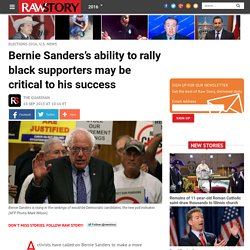 Bernie Sanders: Trump’s ‘weird’ anti-vaxxer rant may put thousands of kids at risk. Sen. Bernie Sanders (I-VT) appears on 'The Rachel Maddow Show' on Sept. 17, 2015. [MSNBC] Sen. Bernie Sanders (I-VT) kept up his criticism of the Republican presidential candidates on Thursday night, pointing out their refusal to address several issues, seemingly without repercussions. “Republicans get away with murder, because they are never challenged,” he told MSNBC host Rachel Maddow. Sanders offered live commentary on Twitter during the debate on Wednesday night, arguing that each of the 11 candidates was boasting about a tough foreign policy. “Did you hear one word from anybody who said, ‘Well, climate change is a real threat to the planet — we need bold action?’ Maddow also showed footage of Republican front-runner Donald Trump’s anecdote during the event linking autism to vaccine, which was not shot down by Sen. ‘It was painful': Bernie Sanders tells CNN that GOP debate was so bad he had to turn it off.

Democratic presidential candidate Bernie Sanders explained to CNN on Thursday that Wednesday’s Republican presidential debate had been so “painful” that he could not finish watching it. Although Sanders live-tweeted much of the CNN’s debate, he said that he finally gave up fact checking after two and a half hours. “It was really painful,” Sanders told CNN’s Chris Cuomo during an appearance New Day. “I have to say, I couldn’t go on the full three hours. I gave up after two and a half.” “What was really remarkable is the degree to which they avoided the major issues facing the American people and believe every single problem facing humanity is all attributed to Barack Obama,” the candidate noted.

Sanders expressed disappointment that the candidates failed to discuss solutions for income inequality, childhood poverty and climate change. “I did not hear anybody say, ‘Oh, this is a planetary crisis, we have got to do something.’ Sanders Delivers ‘Excitement and Momentum’ at New Hampshire Democratic Party Convention. MANCHESTER, N.H. – In a rousing speech on Saturday at the New Hampshire Democratic Party state convention, U.S. Sen. Bernie Sanders cast his campaign as the one with the momentum and excitement to help Democrats retain the White House and regain seats in Congress and Statehouses.

“We will not retain the White House … unless we are the party which generates excitement and momentum and enthusiasm,” he said in remarks to the delegates signed up to attend the state convention. Sanders is the front-runner in a string of recent polls in New Hampshire, where he consistently has drawn larger crowds to rallies and town-hall meetings than other candidates. The momentum behind his candidacy, Sanders said, could help Democrats reverse setbacks in the last election when “Republicans didn’t win. In his address, Sanders laid out a detailed agenda that has been the cornerstone of his campaign. He called for raising the minimum wage to $15 an hour. New Hampshire Postal Workers Endorse Sanders.

MANCHESTER, N.H. – The New Hampshire Postal Workers Union on Saturday endorsed Democratic Party presidential candidate Bernie Sanders. “Bernie Sanders has been a long-time champion of postal workers and postal customers,” said Janice Kelble, the legislative director for the union representing about 1,500 members and retirees in the Granite State. “It is time for us to stand up and fight for a president we can count on,” she added in remarks to about 200 supporters who turned up for the opening of a new campaign field office. “I am proud to announce that both the New Hampshire Postal Workers Union and Manchester Area Local have voted to endorse Sen. Sanders as the next president of the United States,” Kelble said as she stood at Sanders’ side and the crowd outside chanted. In a prepared statement, the union official called Sanders “a forceful advocate for working people” who has fought for paid family medical leave and a livable wage.

Sanders Statement on Fed Leaving Interest Rates Unchanged. Sanders Statement on Dr. Carson Comments. At N.H. Retirement Community, Sanders Takes on Rising Drug Prices. EXETER, N.H. – U.S. Sen. Bernie Sanders on Sunday visited the Riverwoods Retirement Community and highlighted rising prices for prescription drugs and increased poverty among seniors. “I can tell you that many seniors are struggling,” Sanders told a meeting room filled with about 250 seniors. He cited a Census Bureau report which said 10 percent of seniors in the United States are living in poverty.

On the Road: Wildcats Go Wild for Bernie. With momentum building for a grassroots political revolution, more than 3,000 sign-waving supporters of Bernie Sanders squeezed into a gymnasium at the University of New Hampshire on Sunday night. “What a fantastic turnout,” said the frontrunner in a string of recent voter surveys in New Hampshire’s first-in-the-nation presidential primary.

Colbert said, as a graphic flashed across the screen saying “Capitalism: It’s where the money is.” But the interview that followed, captured across two segments split up by “some messages from giant corporations to pay our bills,” as Mr. Colbert called them, was more stump speech than punch lines. Mr. And he offered an optimistic assessment of how he would fare in a general election, were he to become the Democratic nominee. “If you look at the polls at me running against the Republicans, despite the fact that 20, 30, 40 percent of the people don’t know who I am or what I am fighting for, we do almost as well and in some cases better than Hillary Clinton does today, and that will only get better in the future,” Mr.