How do we communicate ourselves? 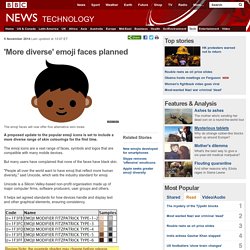 The emoji icons are a vast range of faces, symbols and logos that are compatible with many mobile devices. But many users have complained that none of the faces have black skin. "People all over the world want to have emoji that reflect more human diversity," said Unicode, which sets the industry standard for emoji. Unicode is a Silicon Valley-based non-profit organisation made up of major computer firms, software producers, user groups and others. It helps set agreed standards for how devices handle and display text and other graphical elements, ensuring consistency.

What If Emoji Lived Among Us? These are NSFW emoji for sexting. Emoji aren’t sexy.

They’re simple, tame, and accessible icons that work wonders if you want convey basic emotions. But when it comes to sexting, they're pretty inadequate. Winky faces, eggplants, and bananas have their uses, of course, but if you want to be a little sexier, you’re going to have to use your words. Say What? How Emoji Are Changing The Way We Communicate. With the breakneck speed at which technology is advancing in the 21st century, it was only a matter of time before a whole new means of communication emerged. 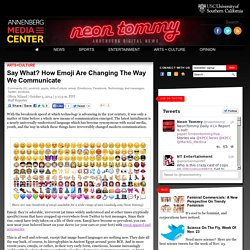 The latest installment is a nearly universally-understood language which has become synonymous with social media, youth, and the way in which these things have irreversibly changed modern communication: There are now hundreds of emoji available for a wide range of uses (osxdaily.com/Neon Tommy) Emoji: they're adorable, irreverent (at times widely understood and at other times cryptically specific) icons that have cropped up everywhere from Twitter to text messages.

Since their rise, emoji have truly taken on a life of their own. Emoji have become so prevalent, you can now wear your beloved heart on your sleeve (or your ears or your feet) with emoji apparel and accessories. This is all well and relevant, except that image-based languages are nothing new. How to use social media to get a job – live chat. As 45% of employers are using social media to find candidates, it's important to keep your social profiles up to date. 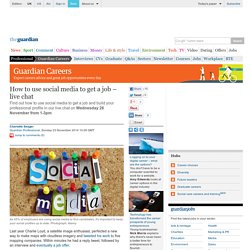 Photograph: Alamy Last year Charlie Loyd, a satellite image enthusiast, perfected a new way to make maps with cloudless imagery and tweeted his work to five mapping companies. Within minutes he had a reply tweet, followed by an interview and eventually a job offer. This story isn't as atypical as you may think. According to a recent survey, 45% of employers now use social media to screen job candidates.

No, you can't get free Audi R8 cars on Facebook – it's a scam. I just didn’t have enough Facebook friends to prove to Airbnb I was real. At the other end of the Airbnb helpline in Colorado, “Casey” sounded incredulous. 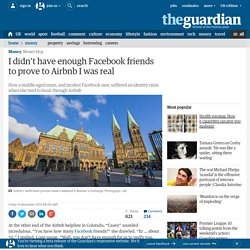 “You have how many Facebook friends?” She drawled. “Er … about 50,” I replied. Long pause. “Well, you don’t have enough for us to verify you. “But”, I squeaked, “I post every now and again … I’m on Facebook most days to check on my friends and relations.” On Breaking the Internet  When J.Law and company had their private, nude photos hacked and leaked onto the Internet a few months ago, there was some serious anger. 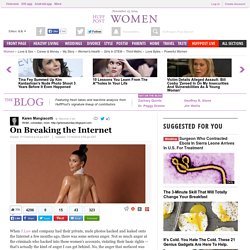 Not so much anger at the criminals who hacked into these women's accounts, violating their basic rights -- that's actually the kind of anger I can get behind. No, the anger that surfaced was toward the victims. Oh sure, it was couched in "concern about Internet safety," but the more honest criticism sounded like: "If you don't want nude photos leaked, don't take nude photos. " Right. Dead and online: What happens to your digital estate when you die? HARI SREENIVASAN: Do you have an email account? 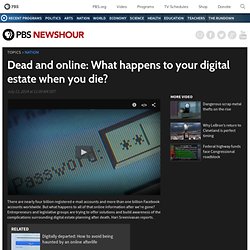 How about a Facebook page? Bank online? The Broken Mirror: Understanding and Treating Body Dysmorphic Disorder: Amazon.co.uk: Katharine A. Phillips: Books. Trade in your item Get a £2.10Gift Card. 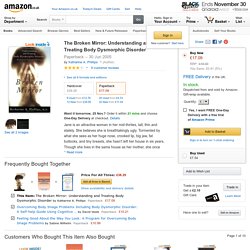 Flip to back Flip to front Listen Playing... Paused You're listening to a sample of the Audible audio edition. Learn more See all 2 images Want it tomorrow, 25 Nov.? <div> Jane is an attractive woman in her mid-thirties, tall, thin and stately. Frequently Bought Together Customers Who Bought This Item Also Bought. BDD Related Art: Post anyhting : Body Dysmorphic Disorder Forum. Body dysmorphic disorder (BDD) Body dysmorphic disorder (BDD) is an anxiety disorder that causes a person to have a distorted view of how they look and to spend a lot of time worrying about their appearance. 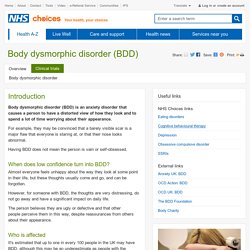 For example, they may be convinced that a barely visible scar is a major flaw that everyone is staring at, or that their nose looks abnormal. Having BDD does not mean the person is vain or self-obsessed. When does low confidence turn into BDD? Neighbours' Melissa Bell spent $115k on plastic surgery. By Amy Croffey for Daily Mail Australia Published: 05:38 GMT, 18 November 2014 | Updated: 09:33 GMT, 18 November 2014 She was the girl-next-door of the nineties, gracing cover after cover and was every boy's teenage crush. 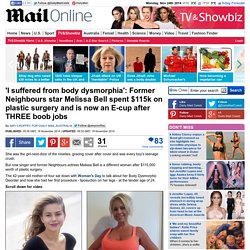 But now singer and former Neighbours actress Melissa Bell is a different woman after $115,000 worth of plastic surgery. The 42-year-old mother-of-four sat down with Woman's Day to talk about her Body Dysmorphic Disorder and how she had her first procedure - liposuction on her legs - at the tender age of 24. Scientists Link Selfies To Narcissism, Addiction & Mental Illness. The growing trend of taking smartphone selfies is linked to mental health conditions that focus on a person’s obsession with looks. The 'Selfie' Trend  You would think the term "selfie" would have existed for years, given its prominence in popular culture today. Five years ago, before the era of smartphones surfaced there was no term declared for the technique used when taking a photo of oneself with an extended arm. With the growth of social media platforms such as Instagram and Twitter over the last few years, the growing trend of the "selfie" has now become a daily routine for millions of teenagers in 2014.

Before I go on, I must admit that I am generally guilty of this crime myself. As a fellow selfie master, I often have friends ask me why I feel the need to take so many pictures of myself. Egotistically, I am also often told how photogenic I am and asked how I look so good in pictures. According to recent theory, the trend of taking "selfies" is actually linked to mental health conditions, with a focus on an individuals obsession with looks and image. Selfiecity. Take a lot of selfies? Then you may be MENTALLY ILL.

Being thin is not the same as being strong and healthy. A post-pregnancy corset may have worked for Jessica Alba, but those kinds of magic bullet solutions for weight loss are a bad idea for a lot of reasons. In order to get back in shape after having her second baby, actress Jessica Alba used the ‘corset training’ method. A corset is a steel ribbed cage that apparently can reduce waist size by seven inches when tightened. 3 Things You Have To Give Up To Lose Weight Forever.

To be healthier and happier, Tory Johnson, author of The Shift, discovered that she had to let go of three particular things. By Tory Johnson 1. The Cheat Day For years, I was lulled into the moderation trap, a bedrock of nutrition advice that works flawlessly for some women but is a disaster for others. Supposedly, as long as I limited myself to a few bites here or there, I could eat onion rings, rice and chocolate cake -- anything, really -- and not gain weight.

Trials still available. Staff reporter Helen Crisell investigates a weird weight loss solution that is quickly gaining popularity in the U.K. New Calorific app shows exactly what 200 calories of different foods looks like. Calorific is a new smartphone app that aims to help users manage their calorie intake by showing just how much 200 calories of any given food stuff looks likeThe developers have measured and then photographed lots of different food stuffs to help show how many calories you are eating without needing to check the labelThe differences in the amounts can be quite dramatic between low calorie foods and those that are highly-calorific. Does Texting Harm Students’ Writing Skills? The explosion of social media has completely changed the way we communicate with each other. Whether via laptop computers, advanced mobile devices, Wi-Fi or enhanced 4G wireless networks, we are more connected than ever to everyone we know.

While this communications boom has been praised for its educational benefits, some argue that a negative side effect is beginning to take hold in our classrooms. HOW SOCIAL MEDIA LINGO’S AFFECTING ACADEMIC VOCABULARY. The way students communicate with one another through social media and text messaging is creeping into school classrooms across the globe. Adorbs new words added to OxfordDictionaries.com – WDYT? We don’t mean to humblebrag, but the August update to OxfordDictionaries.com is bare good and nailed on to interest and impress you. Throw an air punch or have a bro hug (don’t be cray and throw shade or show us the side-eye); be a baller and join the hyperconnected vocabulary fandom and read on to discover which new words from the worlds of popular culture, technology, the news, and more have been added to OxfordDictionaries.com.

Apple (United Kingdom) — iPhone 5s — Tips and Tricks. Is Text Neck really a thing? Text Neck is having its fifteen minutes of fame as every website from the Atlantic to Vice to the Washington Post discuss a study by Kenneth Hansraj, a New York spinal surgeon. Taylor Swift’s Female Celebrity Role Models Are Not Musicians. Do you worship the celebs? By JAMES CHAPMAN, Daily Mail. Keira Knightley Interview - Keira Knightly Anti-Photoshop Campaign. Photo: BFA. This app turns your produce barcode into an extended label. If you go to the farmers market or direct to the grower, it's pretty easy to know where your fresh produce comes from. But if you're shopping for apples or pears or lettuce at your grocery store, most of the time the only information you have to go on is the little barcode on each item of produce, or at most the name of the farm and its location on the signage. However, many of us want to know more about where our food comes from, especially the produce, and now a new app can make that a whole lot simpler.